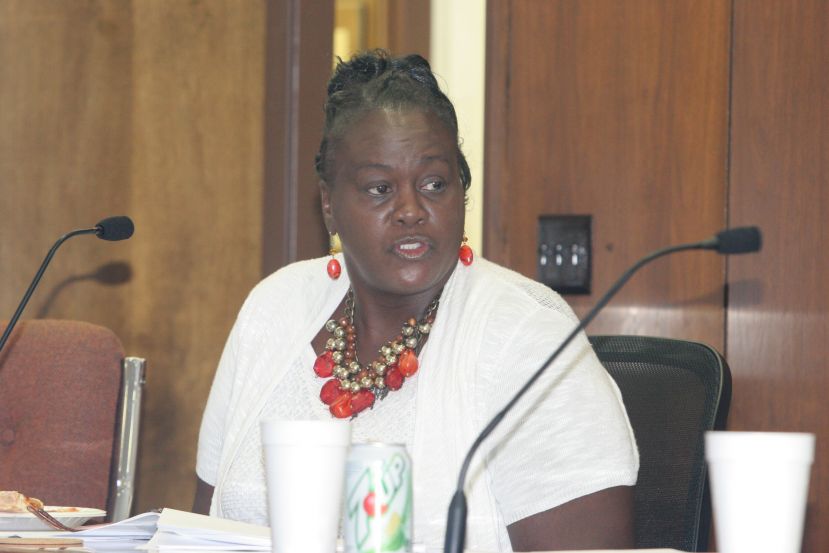 The appointment of a Downtown Development Authority board member caused some tension at the Monday night city commission meeting. Dale Batten, Community Development Director, recommended at the meeting that the mayor and commission appoint JoAnne Lewis to serve the remainder of Windi Raper’s position, which expires on Dec. 31, 2017, as Ms. Raper recently resigned. The position had been advertised, and three individuals had applied to the position, including Ms. Lewis. The recommendation was approved by all but one commissioner, Mayor Pro Tem Olivia Pearson, who opposed the appointment and offered her reasoning in discussion:

“It’s oftentimes that we have very limited numbers of minorities who apply for different appointments to boards and authorities. We had two black males to apply. I feel that one of those black males should be appointed to that commission so that they can feel like they are inclusive. There are other boards and everything, we also have the economic and development funds and I think Ms. Lewis is still serving on. So I think that it would be good to have new blood on different committees sometimes and not just the same faces. New blood sometimes brings new ideas so I am in opposition of Ms. Lewis to that position and I am in favor of either Michael Clark or Mr. Johnny Wilkerson for that position.”

During the work session for the City Commission meeting, Mayor Pro Tem Olivia Pearson and other commissioners offered options for applicants to boards and committees to have their applications held on record in the event that they do not get approved to serve, and be considered first the next time a position is available. This would require a rewording on the applications in the future, and the mayor and commission took no action on this proposition.

At the end of the commission meeting, several commissioners spoke on the issue of appointments to boards and commissions. Pearson spoke once more, saying “I’m not liking what I’m feeling right now, feeling like I’m being pressured toward making a decision that I shouldn’t have to be pressured to do.” She also stated, “In January, we [the commission] said that we were going to evaluate some positions before making an appointment and I was not in agreement with going ahead and appointing anyone prior to looking at the evaluation process. However, at that meeting certain people were reappointed—not saying that I was not in favor of them, but saying that we need an evaluation process in place. … All of our city employees, all of you, are supposed to be evaluated and it’s supposed to be determined if you are performing your job at a level of proficiency. I don’t like reappointing someone and I have not had the opportunity to evaluate what type of job they are doing for us. … I just want to make it clear tonight, I’m not voting against my conscious and I’m not gonna allow anybody to force me to vote to do anything.”

In agreement with what Pearson stated about new blood in commissions and boards, Commissioner Mike Gowen stated: “I have to agree with Mayor Pro Tem Pearson, I think things would work better if we had more people involved and I would recommend that as we look at these appointments that… maybe we could expand some opportunities to some of these folks that are gracious enough to offer their time and talents to help, if we could find some ways to get them included. Maybe some of the boards have room for some committees. I’m just thankful that we do have the community involvement that we do have, that so many of the men and women in our community have the resources and time and talents and contacts that serve our community well like they do.”

Commissioner Cindy McNeill encouraged those who would like to apply for positions in certain commissions or boards or who have done so in the past but were not appointed to continue to pursue those positions, and also had advice for those who would like to serve in the future. “In addition to folks who are willing to give their time to volunteer in areas where we advertise  for boards and commissions and things for people to serve on -- in addition to that, there are all types of volunteer organizations. In order for us as boards and commissions to get to know you better, to see things on your resume—if you’re a young person and you can start out young and putting yourself and your time to good use to help other people, that will help to build that resume so that you can serve in later years. We’re just so grateful. As the mayor pro tem indicated, we had four good applicants for this DDA board and we’re so thankful that folks would step forward and we don’t take that for granted.”

However, with a 6-1 vote in favor of her appointment, JoAnne Lewis is now appointed to the position on the Downtown Development Authority left vacant by Windi Raper’s resignation.

Property at 216 South Letitia Avenue in Douglas that was donated to the city by Wells Fargo Bank in 2015 is to be advertised for sale via sealed bids.

For the safety of the citizens of Douglas, a new ordinance concerning the maintenance fire hydrants located on private property had its first reading at the meeting. The ordinance specifies the remedies to certain issues a fire hydrant may have, issues that the fire department has encountered during emergencies when a hydrant was non-operable. Failure to comply with the ordinance would result in a $100 fine.

Many items of surplus from the City of Douglas are now up for auction. The items are listed on GovDeals on-line auction site.

Stevie Young of the recreation department proposed a fee waiver for Central Square Gym to allow the Georgia Department of Labor to use the gym for a Farm Labor Forum for Agricultural Business on March 10. Mayor Tony Paulk and the city commission approved the fee waiver, and only a $100 administration fee will be charged for the usage of the Central Square Complex.

Two Economic Development Authority appointments had expired and had been advertised for two weeks as per protocol. The appointees that served in these positions wished to continue to serve. Luke Morgan, whose term expired on Dec. 31, 2014, and Lidell Greenway, whose term expired on Dec. 31, 2015, both retained their positions. Greenway’s term is retroactive back to Jan. 1, 2016 and will expire Dec. 31, 2018, and Morgan’s term is retroactive to Jan. 1, 2015 and expires Dec. 31, 2019. The recommendation to reappoint Greenway and Morgan was passed by the mayor and commission 6-1, with Mayor Pro Tem Olivia Pearson opposing the reappointments.

The mayor and commissioners extended prayers and well wishes for the families of Douglas and Coffee County that have recently met with tragedy and death. Families included the Walker family, the Johnson family, and the Moore family. Mayor Pro Tem Pearson also extended prayers and condolences to the Gaskin family.

Commissioner Kentaiwon Durham encouraged that everyone turn to prayer in these trying times, and for the young generation to turn away from gun violence. “When I was little, when we fought, you put up your dukes. We didn’t draw to a gun, we didn’t draw to a knife. And then two days later, I could talk to you and I could hug you and we could be back friends.” He encouraged local males to volunteer for an upcoming Men’s Mentoring Program given by the Boys and Girls Club. The Boys and Girls Club is looking for men that can sacrifice one hour a week to mentor young men and boys. The applications are due by Feb. 26 and Commissioner Durham encouraged men to participate because, as he stated, “Someone needs you.”