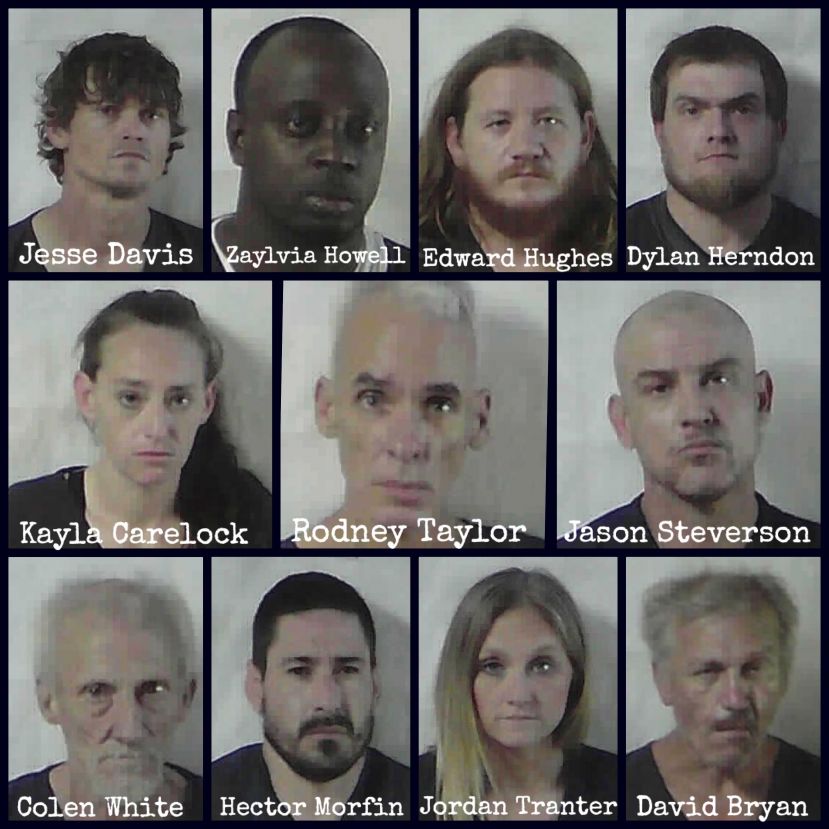 The Jeff Davis County Drug Unit has made several arrests in the last few weeks.  From proactive street presence to search warrants and even someone who inadvertently turned herself in, officers have dropped a heavy hammer on a few unsuspecting subjects.

On October 13, 2022, drug investigators were conducting an investigation at a suspected trap house.  During their initial investigation, Jesse Owen Davis was arrested for possession of methamphetamine.

On October 15, 2022, drug investigators executed a search warrant at a residence, the subject being investigated fled the scene on foot but was shortly apprehended by officers.  Zaylvia Jermaine Howell was arrested and charged with weapons charges.

On October 21, 2022, drug investigators conducted a traffic stop on a vehicle for a traffic violation.  After a brief investigation, it was discovered that the driver, Edward Tyler Hughes was in possession of controlled substances and was arrested.

On October 23, 2022, JDSO K9 unit conducted a traffic stop on a vehicle for a traffic violation.  During the stop, it was discovered that Dylan James Herndon was in possession of methamphetamine and was arrested.

On October 24, 2022, drug investigators were conducting an investigation on a wanted person that was suspected to be in possession of illicit prescription medication laced with fentanyl. During surveillance of the subject and before officers could stop the vehicle, it turned into the parking lot of the Sheriff's Office and parked.  Officers pulled into their home office and got out with the subject and informed them of their active warrant.  Kayla Duron Carelock was arrested for an active warrant.  A search incident to arrest revealed that she was in possession of Schedule IV controlled substances.

On October, 24, 2022, JDSO K9 assisted a county deputy on a traffic stop. The officers deployed his canine "Zeta" on the vehicle which alerted to the presence of drugs. During a brief investigation, methamphetamines was found in the vehicle. Jason Bradley Steverson and Colen Dean White were arrested for possession of methamphetamine.

On October 27, 2022, drug investigators located a subject who had outstanding warrants.  Hector Edwin Morfin was arrested for his outstanding warrant.  During search incident to arrest, investigators discovered controlled substances in Morfin's pockets.  Morfin was accompanied by a friend, Jordan Foster Tranter, who admitted to officers she had a small quantity of marijuana in her possession.  Investigators searched her belongings and discovered additional controlled substances.  Tranter and Morfin were transported to the Jeff Davis County Jail.  During a brief investigation into the subjects and their previous activities, officers executed a search warrant at their residence and discovered large quantities of marijuana in the home.

On October 29, 2022, a JDSO deputy conducted a traffic stop for a traffic violation, upon making contact with the driver, the officer could smell the odor of alcohol coming from within the vehicle.  After a brief investigation and search of the vehicle, the driver, David Lee Bryan was arrested for having an open container and a possession of methamphetamine.