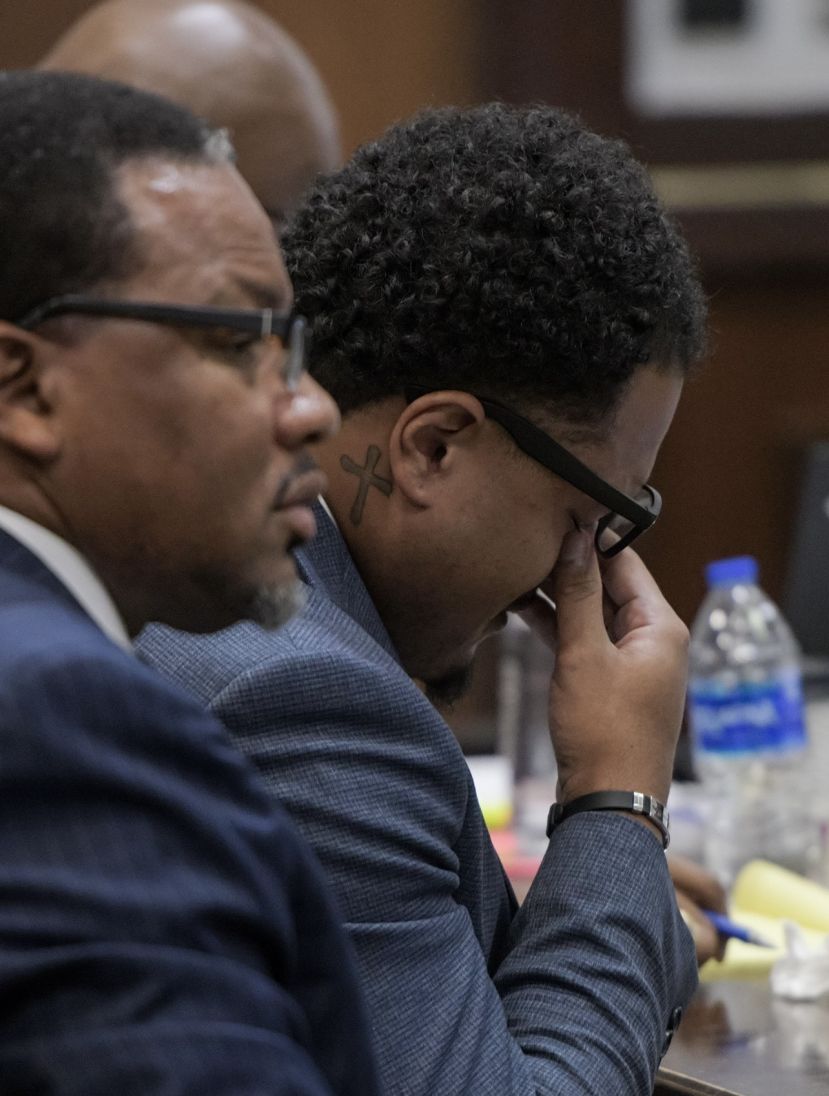 Submitted photo Marc Wilson reacts as he hears that he has been declared guilty of involuntary manslaughter.

A Bulloch County jury has reached a verdict in the trial of Marc Wilson, a man with connections to Douglas who was facing life in the 2020 shooting death of a 17-year-old in Statesboro. Wilson was found guilty of involuntary manslaughter but acquitted on charges of murder and two other charges.

Wilson, a biracial 23-year-old, was charged a few weeks after the shooting occurred, which resulted in the death of Haley Hutcheson, a white female from Reidsville. Wilson and his girlfriend, who was in the truck with Wilson at the time, claimed that a truck with young white men hanging out of the window attempted to run Wilson’s vehicle off the road.

At the time, Wilson told investigators he fired the gun in self-defense, and also said the boys in the vehicle were “yelling racial slurs” at him. According to a motion filed by Wilson’s attorneys, the boys were throwing objects at his truck while following him for several miles, and Wilson eventually grabbed his “legally possessed handgun” and fired a “warning shot” under the individual’s truck. Wilson claimed the driver continued to “swerve” towards them, but then backed off before speeding up to his vehicle again. He then said an object struck his vehicle, which he thought was a bullet.

Wilson stated that he “feared for his girlfriend’s life,” leading him to fire two shots and speed away. One of the bullets struck Hutcheson once in the back of the head, resulting in her death.

The trial included testimony from many witnesses, including Wilson’s girlfriend and teenagers inside the truck on the day the death occurred. The driver of the vehicle, Luke Conley, took the fifth amendment and did not answer questions on the stand.

Wilson’s girlfriend, Emma Rigmond, testified that the truck followed them, swerving into their lane and trying to stay next to them. She said Wilson eventually “shot, to kind of say, ‘hey, leave us alone.’’”

A big point in the case centered around the couple, Wilson and his girlfriend, having an interracial relationship. Both told the jury the incident was motivated by race. The defense attorney stated, “In his world, black boys and white girls can’t share a kiss on a Saturday night. In his world, a white girl who is sweet on a black boy, don’t worry about the words.”

The prosecution disagreed, claiming Wilson’s actions were not justified, and said he introduced the firearm and the bullets which killed Hutcheson.

The jury spent a total of 7 hours deliberating and returned a guilty verdict on involuntary manslaughter, one of three lesser charges presented to the jury just before they began their discussions. Wilson was found not guilty on all other charges including murder and aggravated assault.

Sentencing will take place on September 20 at 2:00 p.m. In Georgia, one found guilty of involuntary manslaughter can be sentenced to a maximum time of 10 years. So far, he has spent close to two years in jail awaiting trial before being released in March on house arrest.