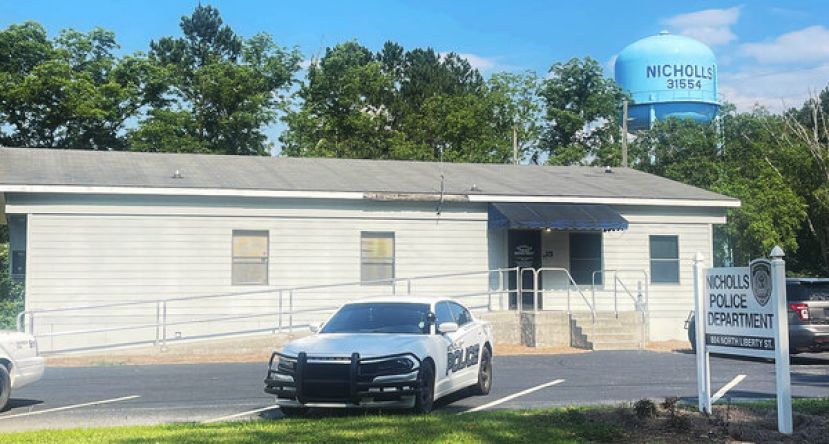 For the second time in less than six months, the city of Nicholls is left without a local police chief and officers after they all turned in immediate resignation letters this week. DouglasNow obtained a copy of the letters, with the chief and one officer blaming a "lack of workforce, equipment, and pay" as their reasons for leaving.

Former Nicholls Chief of Police Billy Ray Fields, Jr. turned in his letter on June 1, noting it was effective immediately. The letter states, "As Chief, it has been challenging to obtain and be provided with the necessary tools to succeed in this position. Lack of manpower which forces me to work extreme hours, not having the proper essentials for my fellow officers to be proactive within the community because of a strict budget, and being accountable on agreeance set forth before becoming Chief. Due to those reasons, I must resign from the position I so dearly love and have enjoyed these past six months. I am grateful for my time here and for the supportive staff, whom I have come to consider loyal friends."

Fields, Jr. also thanked the mayor for selecting him as the chief in January and wished the Nicholls Police Department and Nicholls City Hall "nothing but success in future endeavors."

Nicholls police officer Ronald Dixon's resignation, which was also turned in on June 1, reiterated the chief's complaints, stating his reasons for resigning were based on a "lack of manpower, equipment, and pay, etc."

The three other officers, Summer Crocket, Shantokeo Rolax, and David Alderman, only mentioned their grounds for resignation being personal reasons.

This isn't the first time the citizens of Nicholls have seen a police chief and all its officers leave their positions in the department. In December 2021, former Nicholls Chief of Police Jamie Merritt and six other employees, including the city clerk, resigned unexpectedly after "tension" during a council meeting. In those letters, officers expressed a "lack of respect and hostility."

Coffee County Sheriff's Office Chief Deputy Fred Cole told DouglasNow that the sheriff’s office will have deputies patrolling Nicholls for the time being.

DouglasNow reached out to Nicholls Mayor Tamon Frost for a comment but had not received a response by publication.