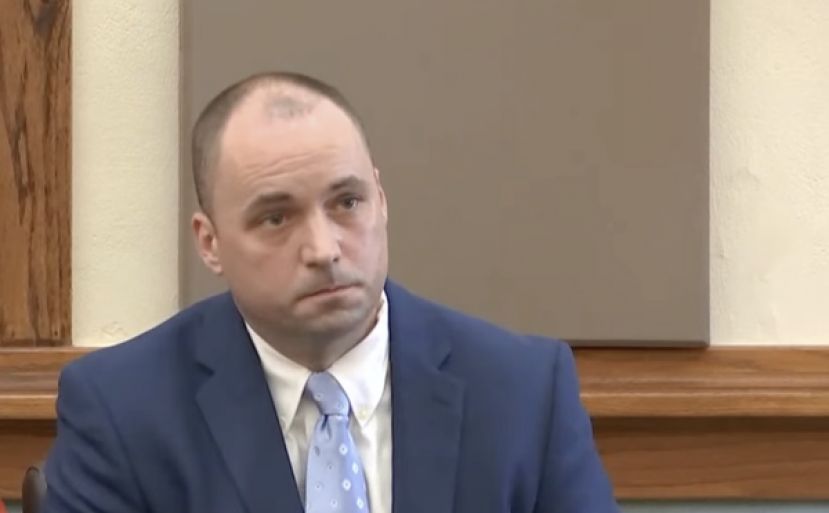 Photo courtesy of Philip Holloway/Printed with permission Ryan Duke testifies in the Tara Grinstead murder trial on Tuesday, May 17, 2022, in Irwin County. He stands accused of killing Grinstead though he says that his former best friend, Bo Dukes, was actually the killer.

Ryan Duke, the man accused and currently on trial for the killing of Irwin County teacher Tara Grinstead, took the stand this morning and accused Bo Dukes, his former best friend, of killing Grinstead.

Duke testified that he was not only the person not responsible for Grinstead's murder, but that he had never been inside her home or car and had no romantic or personal relationship with Grinstead.

While Duke admitted to helping dispose of Grinstead's body, the crime Bo was charged with in 2017, he denied any other involvement in her disappearance and death. Duke also claimed to not know how Grinstead was killed, only that he was not the person responsible.

The defense attorney asked Duke if he knew of Bo's "well-known" family and was aware of their reputation. Duke testified, "Everyone knows them. I don't think there's anyone that doesn't know them."

According to his testimony, Bo's reputable family and "dark" personality concerned Duke, and the reason he protected Bo for so long. "I was afraid for myself and my family," Duke stated.

After being enrolled at ABAC for a year, Duke said he voluntarily withdrew after "not doing well" academically, admitting his priorities at the time were "partying and drinking."
After withdrawing from college, according to the testimony, Duke joined the army but found it "wasn't for him" after realizing he "didn't think he was capable of violence," testifying to never owning a gun or even killing an animal.

Duke said he went "AWOL" from his time with the Army from seeing a trainee die after her parachute did not open during a training course. While he was still serving, Duke admitted to stealing three checks from his brother, but said he turned himself in after feeling remorse and guilt. Due to the crime, Duke received an Other Than Honorable discharge, which he said he didn't appeal because it was deserved.

The defense questioned Duke about his friendship with Bo, which he said formed his senior year of high school and evolved. The two, along with another male, ended up moving in to a home together in Valdosta. As roommates, Ryan said they "drank heavily and did drugs," specifically marijuana and cocaine.

On the day Grinstead was killed, according to Duke, he and Bo drank tequila. Duke said he ended up getting sick, throwing up, and passing out between 9:00 p.m. and 10:00 p.m.
The following day, according to the testimony, Duke was awakened by Bo around 8:00 a.m. Duke described Bo as "looking panicked and pale" that morning before he said Bo confessed to killing Tara Grinstead the night before. Bo was known to make "dark" and "odd" statements, which led Duke to believe Bo was lying initially.

"I didn't understand at first. I was just like, 'Huh?' 'Who?' He told me he killed her and then went outside to smoke a cigarette," Duke testified.
Duke told the jury Bo claimed to have taken Grinstead's wallet, purse and license, which GBI agents previously testified were a few of the only items that appeared to be missing from Grinstead's home.

While Duke said he believed Bo had stolen the items, he did not think he had killed her. "I didn't know what to do and wanted to return her purse," Duke said.
The jury listened as Duke recalled taking Bo's truck to attempt to return Grinstead's belongings around 9:00 a.m. that Sunday.

During the state's witnesses, GBI agents testified that a phone call from a payphone had been made to Grinstead's home during the night she went missing, and that piece of evidence had never been revealed to the public. When the GBI interviewed Duke in 2017, Duke had been the first person to acknowledge the phone call, which they referred to as "guilty knowledge."

Duke admitted to making the phone call in his testimony, claiming to have called Grinstead to make sure she was okay, and if she had picked up, he would return her purse.
After Grinstead didn't answer, Duke stated he went back to the residence and woke Bo up. Bo, according to Duke, said he would "show me what he had done" and then drove him to the orchard. "Bo was quiet, and I got more and more worried," Duke said.

Duke stated they arrived at the orchard in Ben Hill County, the location human remains were located in 2017 but were never officially confirmed to be Grinstead's, and Bo then showed him Grinstead's deceased body.

According to Duke, Grinstead's body was in a "clearing" located in the woods, partially covered with debris, and she laid face down before Bo "violently" flipped her body over.
Duke said, "Bo looked at me and said, 'I told you.'"

Douglas Now will continue to post updates throughout the trial and publish a recap of all the details later today.