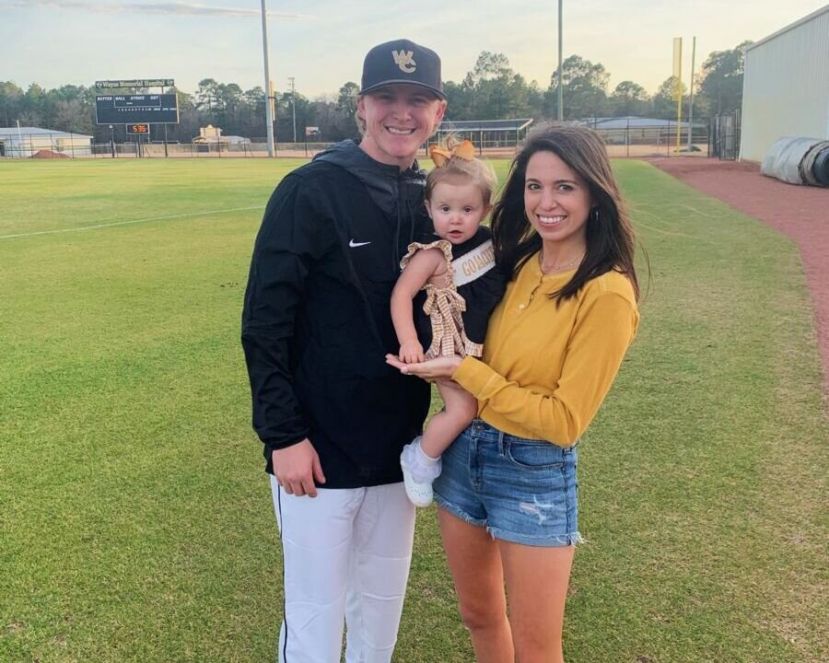 Every love story has a beginning, and Kristen and Chase Hinson’s began on the campus of South Georgia State College. They can’t remember exactly when they initially met at SGSC. With Kristen playing on the women’s soccer team and Chase being a member of the Hawks baseball team, they were involved in many of the same activities. They would see each other in the dining hall and pass by each other in the residence halls. But one day Chase must have decided it was time to get Kristen’s attention. She remembers it this way, “My friend Lori and I were walking to my car from the residence hall. Chase was with a group of friends near the soccer field. He kicked a ball at me and then, of course, we had to laugh and talk about it.”

After that encounter, they started talking more and eventually went on an “official date”. Chase asked her to the movies and she gladly accepted. There was one condition from Kristen. They had to stop at Walmart first. Chase wasn’t sure why until she explained they needed snacks for the movie instead of buying them there. They bought candy and yes, even chicken tenders. Of course, she had brought her big purse so it would all fit when they went inside. Kristen explained that it might not have been the most romantic thing to do on a first date, but she’s sure it impressed Chase.

After a few more dates, Chase invited Kristen to Jesup to meet his parents. It happened to be the day before Valentine’s Day of their freshman year. Chase bought flowers for Kristen and asked her to be his girlfriend. Kristen says, “This was my favorite Valentine’s Day during my time at SGSC and the most meaningful. He does jokingly remind me that it was the first and last time he bought flowers because I left them in my dorm room where they stayed until they died.”

After a time of dating, they knew a proposal was inevitable. Kristen had told Chase that she was not one for surprises and she wanted to be ready for the proposal with makeup on and her nails done. Chase shared how it happened. “I made sure I told Kristen to have her nails done and bring a nice outfit. She, of course, knew the proposal was about to happen,” explained Chase. “What she didn’t know was the surprises I had planned.” Chase rented a venue and made all the arrangements. He had music playing, a photographer to capture the moment, and invited their friends and family to show up after the actual proposal to celebrate with the newly engaged couple. Kristen said, “It was honestly perfect and more than I could have ever asked for at such a special moment in our lives.”

After graduating from SGSC in 2017, they continued their education to finish their undergraduate degrees. Kristen and Chase became Mr. and Mrs. Hinson in 2019 in a ceremony at The Barn at Melan farm in Baxley. Kristen said, “We had originally made plans to wait to get married until we were completely out of college, but with a lot of prayer and with the help and blessing from our parents, we decided to get married the summer of our senior year. Chase was finished with baseball, and I had finished my undergraduate degree that year, so it honestly was perfect timing.” The couple was not able to go on a honeymoon because Kristen had to write a ten-page research paper the next day and finals were the following week. The dedication to education paid off. The year after their wedding, Chase began teaching and Kristen finished graduate school, all while they welcomed a daughter, Hadley Grace. Her due date was on their wedding anniversary, but she decided to grace them with her presence a little earlier than that. Kristen and Chase say, “Hadley is now 18 months old with the biggest personality. She is girly, brilliant, and absolutely spoiled rotten. She loves her people big and is the biggest blessing to our families.”

The future looks bright for this couple who began their journey at SGSC. Chase is currently teaching at Arthur Williams Middle School and will finish up his specialist degree this summer. Following his love of baseball, he is also the assistant varsity baseball coach for Wayne County. Kristen is a Speech Pathologist at The Speech Clinic in Jesup where she serves both adults and children.

Chase and Kristen both agree that the years they attended SGSC were by far two of the best years of their lives. Kristen says, “We had the most fun and met some of the best people. We are forever grateful that we were able to be students there. Nothing could be better than that!”