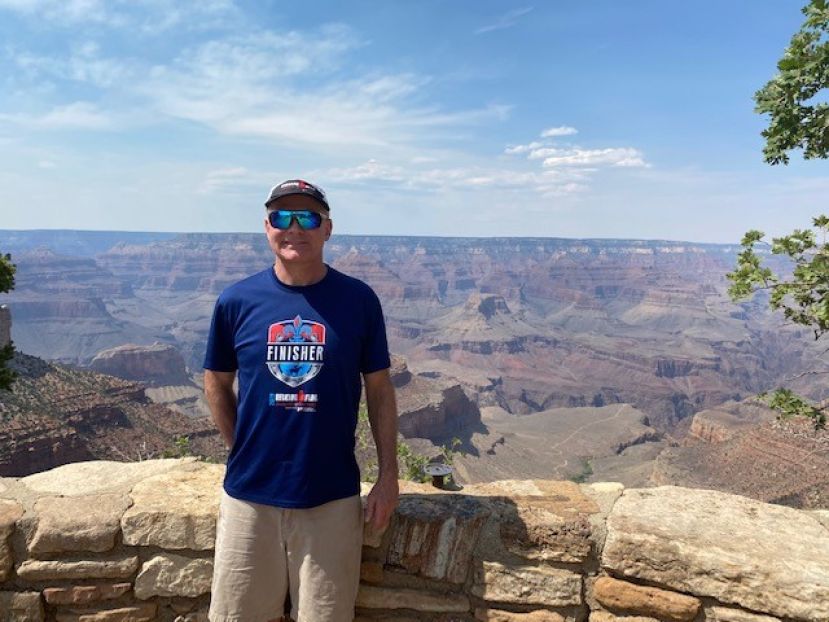 Submitted photo The Grand Canyon is one of the many spots out west Wiregrass graduate and traveling nurse Sean McConnell has visited since finding his dream career.

Sean McConnell graduated from Wiregrass Georgia Technical College in 2018 with his Associate of Science in Nursing Degree, and he started his first job at Tift Regional Medical Center in Tifton that October.  On the surface, Sean is a Registered Nurse with less than 3 years of experience, but if you dig a little deeper, you will find in this short time in the profession has risen him to heights in which most nurses never dare dream.

The first year and a half of working at Tift Regional in the emergency room helped give him a great start in his new profession.  Eighteen months after starting at Tift, COVID-19 took a "deadly hold" on the United States and the world.  Sean always had a dream of traveling as a nurse, and the usual requirement of 24 months to do so was shortened to a one year minimum with the virus devasting the U.S.  He took his first travel assignment a mere eighteen months after starting his career. In April of 2020, he started working as a nurse in East Orange, New Jersey, which is about fifteen minutes from New York City.

To say that Sean started his travel career in a tough situation would be an understatement.  Sean recalls, "I felt like I was in the frying pan of a new career and jumped into a raging fire.  The hospital in which I worked had to quarantine 80% of their ER staff due to the virus.  We were given 4-5 hours of orientation on the floor, and then we were given our own patients. So many patients were dying and there seemed no end in sight.  Even for a 'baby nurse' I knew all was being done that was available, and everyone was working as hard as they could to help.  In those first 6 weeks on assignment I grew up at least 2 years as a nurse."

After working in East Orange, he returned to Georgia for a few weeks and then accepted a contract in a 900-bed, level 2 trauma center located in Hackensack, New Jersey.  Hackensack University Medical Center's emergency room holds 135 patients, and the nurse patient ratio was usually 6-1 and even reached 8-1.  This tough assignment allowed Sean to become much better at prioritization and handling higher acuity patients.

The next assignment Sean took was in the ER of a 200-bed hospital in Cape Girardeau, Missouri.  Sean said, "I felt like this assignment allowed me to take a breath and it seemed like a more 'normal' contract."  Without going home, Sean went straight to Deming, New Mexico in January 2021 for his fourth COVID contract.

Sean proudly explains, "The hospital in Deming has trained me in the ICU and as a telemetry nurse.  I have never heard of a traveler being trained in other departments.  I am very honored to say that this facility holds me in such high regard that they were willing to spend the extra money to give me even more opportunities."

Mimbres Memorial Hospital in Deming has even mentioned keeping him the whole year on his COVID contract pay, which is over $5000/week.  "I did not get into nursing for the money," Sean says, "and I've have had times in my life when I've had some 'jingle' in my pocket, and I've had times when I haven't.  It is far better to have some 'jingle.'  I will make between $240,000-$300,000 this year!  I think that is some great jingle in my pocket," Sean says with a smile.

Sean credits his financial success during the pandemic to being willing to go where most others will not.  There is a serious risk but also most certainly a reward financially and personally.  Sean proudly states, "I have been in many tough situations medically, and I have been involved in saving many peoples' lives.   I have experienced family members tearfully hug me and other team members after their loved one was saved from certain death.  That is the real reason a person should be a nurse.  I know that is why I became a nurse, to truly help people."

Sean credits Dr. Darlene Ridley, Wiregrass Director of Associate in Science in Nursing (ASN) program, and the whole staff of the ASN program from Wiregrass Georgia Technical College with giving him the tools needed to excel in nursing to heights most will never see.  Sean states, "I have a bachelor's degree in business with a major in marketing.  I was a student with a Georgia University.  The curriculum in the ASN Program at Wiregrass is as well put together as any program I experienced at the university.  The Wiregrass nursing program is very tough, and absolutely capable of helping to launch a nurse into the stratosphere of their career."

Within the next few years, Sean will travel to Hawaii for at least 6 months on a nursing contract.  Sean grins as he jokingly says, "I'll have to dig down deep to complete 6 months in Hawaii, because that might be tough!"  He also plans to do contracts all over the U.S. and in Guam, a U.S. island territory near the south pacific, and an Alaskan contract.  Once Sean has saved enough money to pay cash for his house somewhere "within 100 miles of Yellowstone National Park" he will donate 3-6 months of his time and work on MERCY ship.  This cruise ship sized boat goes to different places of the world and gives free operations and medical care.  Sean firmly states, "After working from 2008-2018 at The House of Grace in Adel and helping men in need, I learned that it is very important to help others.  You will actually find yourself being helped more than the ones you are trying to help!"

As if his nursing career isn't enough adventure, Sean is a 10-time IRONMAN triathlon finisher.  This 140.6-mile race consists of a 2.4-mile swim, a 112-mile bike ride, and finishing with a marathon run (26.2 miles).   He has also run three 50-mile ultramarathons and three 100-mile ultramarathons, as well as about twenty regular 26.2- mile marathons.  His fastest finish time in a 100-mile ultramarathon is twenty-four hours and twenty-five minutes.  Sean says with regret, "I really wanted to finish that 100-mile run in under twenty-four hours, but I missed by twenty-five minutes."  His fastest standard marathon time is three hours and five minutes, which is about 7:10/mile.  He also qualified and ran the famous Boston Marathon in 2011 and 2013.

When asked how he can do such physically demanding events, Sean says, "I just have a don't quit attitude.  I turned fifty in February, but I feel like I'm twenty-five!  I have seen quite a bit of this country, and I plan on seeing MUCH more.  I have been snow-skiing in New Mexico and Colorado this year alone.  Travel nursing is a wonderful job for a single man with no children.  Heck, it's great for almost any nurse!"

In the fall of 2020, the NursingProcess.org site named Wiregrass's Associate of Science in Nursing (RN) program as the number one program in the state of Georgia. The RN program and Health Science programs will start Spring Semester 2022 in the brand-new Ed and Rhonda Marks Health Sciences Building on the Valdosta Campus. To learn more about this program and other Health Science programs at Wiregrass, visit Wiregrass.edu.  The college will be accepting new students for Fall Express, classes start September 27.