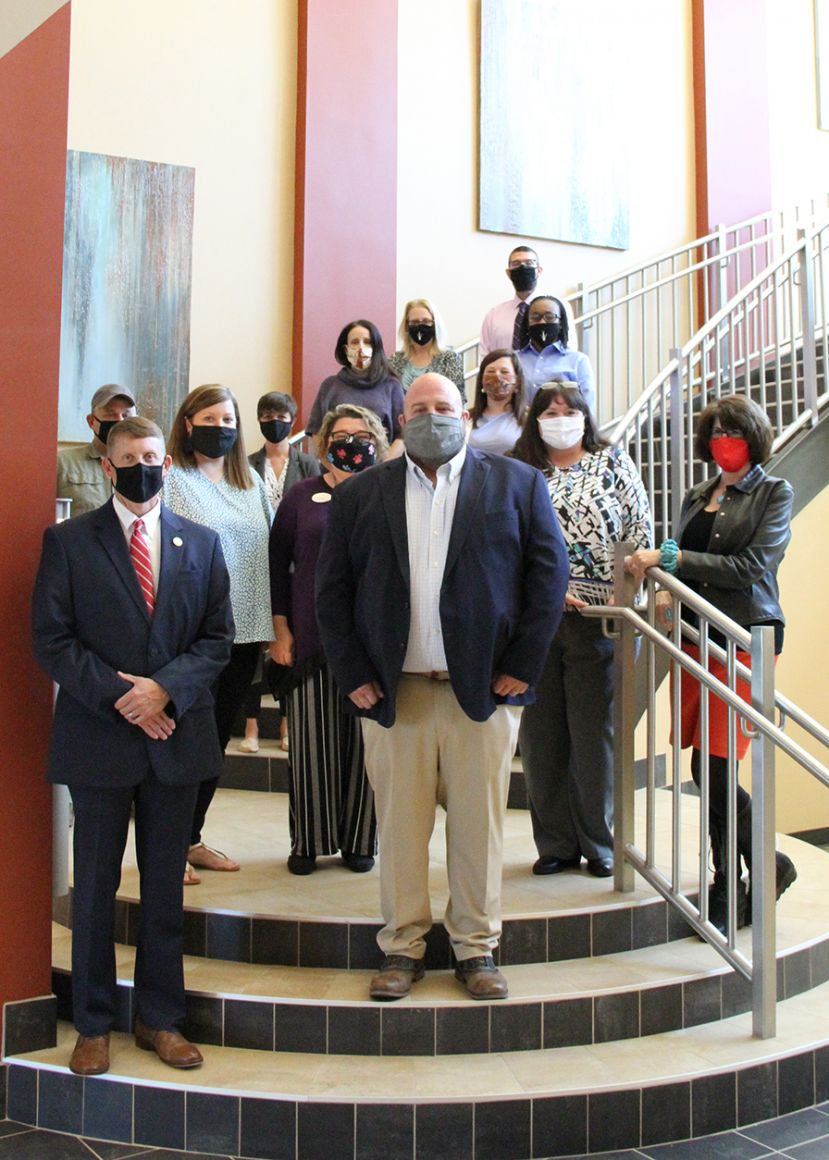 Submitted photo L-R: TCSG Commissioner Greg Dozier is pictured with the 2020 TCSG Rick Perkins Winner Mike Day, and Wiregrass President Dr. Tina K. Anderson. Commissioner Dozier visited the Coffee Campus recently to surprise Mike, (Welding Instructor) with the state award. Pictured behind them are employees of Wiregrass campuses who were on hand for the announcement.

The name of the first runner up for State Rick Perkins Winner had just been announced by Technical College System of Georgia's (TCSG) Commissioner Greg Dozier.  Silence fell upon the student center on the Coffee Campus as college administrators and employees along with Mike Day, Wiregrass' 2020 Rick Perkins Winner and state finalist, waited to hear the name of the State Winner. Through the deafening silence everyone was watching the Facebook Live feed and heard Mike Day's name announced as the 2020 Rick Perkins Instructor of the Year.  In seconds cheering and hollering erupted for Mike to be surprised again by seeing TCSG's Commissioner Dozier and other TCSG officials entering the student center.

"My wife was sitting beside me and all I could think was breathe," shared Mike "As I saw my photo on the big screen I heard nothing, but immediately felt a sense of relief.  When I saw Commissioner Dozier my first thought was I'm so happy to see him and then I felt humbled by what all this excitement meant, and grateful that I get to teach."

Mid-August TCSG announced via Facebook Live that Wiregrass had two state finalists with Jacquelyn Mallard as GOAL (student of the year) and Mike Day as Rick Perkins. On September 14 before a panel of judges Mike delivered his speech and answered interview questions virtually.  This was the first time the state-level competition had been held virtually.

Mike's passion for technical education coupled with his life experiences tells a unique story all on its own.  Having served in the U.S. Army for 21 years, he learned occupational skills in Diesel Mechanics.  One day when a vehicle went down and no parts to fix it were around, he grabbed a welder and welded a part together and repaired the vehicle.  Mike states in his speech that that torch sparked a new passion.  When he retired from the military that spark would lead him to enroll at Wiregrass Tech to receive formal welding training.  After graduation he entered the welding field and worked for himself providing a great income working on farm equipment.  Even with his new career, the solider in him missed serving his country.  Mike would find himself serving again for a time period until he knew it was time to officially retire.

After retiring from serving where constant mortars, rockets, and small arms fire every day, he found himself safe at home and was grilling out with his family.  Within a second the propane tank exploded leaving him with 3rd and 4th degree burns over 40% of his body.  He spent months in a burn unit followed by 43 surgeries and physical therapy.  After he recovered from his injuries he returned to work as a welder and then he received the call from Wiregrass to interview for a welding instructor position.  "I had no idea what I was getting into," shared Mike. "I was handed an empty room with 12 students."  With his military instincts he sat on the floor and drew out his plan taking one task at a time.  "I found my passion and was able to convey my excitement to my students each day," added Mike.  By working nonstop and in his spare time, he recruited and built relationships in high schools and industries and has gone from 12 students just three years ago to 119 this Fall Semester.  When asked what makes his welding class so special? He responded, "Teaching is like welding: we can take rough materials that are sometimes broken in places, join them together again, and turn them into something stronger and more beautiful than they were before. I can't imagine a more noble way to serve my community than being a welding instructor for the Technical College System of Georgia."

Mike serves as the Welding Instructor on the Coffee Campus located in Douglas.  His welding lab has grown so, that it is currently under construction adding more square footage to allow for more students.  Wiregrass Executive Director of Departmental Affairs Nicole West serves as the college's Rick Perkins Coordinator.  To learn more about Wiregrass' Welding program visit, Wiregrass.edu.