In a what was truly a community-wide effort, Coffee Countians rallied together over the weekend to give Trojan junior Malik Sparkman, who is battling kidney cancer, and his girlfriend, Tia Williams, the dream date of a lifetime. Malik had stated one was his greatest wishes was to take Tia on their first date in a horse and buggy, and Coffee County delivered in a huge way.

Here is a summarized narrative of the event written by Russell Flanagan, who is the page owner of 'Coffee County Ga. Police Scanner' on Facebook.

"It all got started when Mrs. Karleen Evans (or as Malik Sparkman calls her, mom) called Coffee County Sheriff Mr. and Mrs. Wooten to see if they had a horse and buggy. They didn't  asked why. Mrs. Evans told them one  of Malik's wishes was to take his girlfriend, Tia Williams, on their first date in a horse and buggy. Mr. and Mrs. Wooten jumped on the phone with The Hamilton family in Waycross and told them the story, and they jumped in to help.

Mrs. Evans called Douglas Limo and Car Service and they jumped in to help. Then Helping Heart's Bike Club found out and wanted to help escort.  Next, someone called the Douglas Fire Dept. They wanted to be sitting beside the road. Next, someone called the Georgia State Troopers and they wanted to help. That’s when we got the call to tell everyone on the Coffee County Police Scanner Page to help. By this time, only two hours were left and Malik still did  not know. It stayed that way until Douglas Limo pulled up in his front yard to pick him and Tia up, along with the sheriff and Douglas Police escort.

They pulled onto the road and got to Aden's on 158 East, and there sat three more Douglas Police cars, a Georgia State car, and 20 motorcycles pulling out in front of them.

They got to ride through town on Maddison, then back on Peterson, then back down Maddison, and went out to Jardine Stadium, where people stood and watched them get out of the limo at the north end of the field. As they stepped out, Malik called Sheriff Wooten over, pulled out a tie, and asked the sheriff to tie it for him. So Sheriff Wooten put it around his own neck, got the tie ready, then put it around Malik's neck stating, “Now you look sharp son!”

They walked on to the field to the 50 yard line where Kodey Johnson and other friends of his had a meal waiting for them fit for a king from The Fern Bank, complete with flowers and the works. It being their first date, he pulled her chair out and had her sit first. After eating, they walked off the field where the horse and buggy was waiting on them as they exited the south gate.

They walked around, looked at the horse and buggy, then climbed in where the ladies helped them wrap blankets around them from head to toe. Mrs. Wooten asked if they were ready and Malik said, "Yes." However,  Sheriff Wooten saw he was still cold so he pulled off his own coat and wrapped it around them.

They left for town going down Peterson, turning at McDonalds, and pulled over in the K-Mart parking lot because of the cold. After the ride, they took more pictures with The Hamilton's horse and buggy. As always, Malik, the big hearted person he is, with that big smile on his face, thanked everyone over and over again." 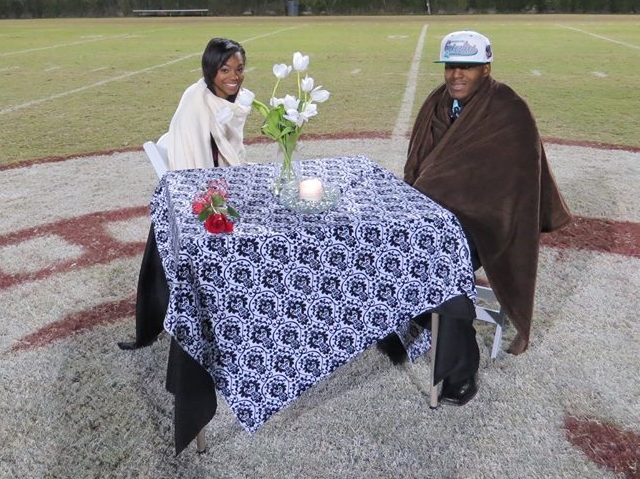