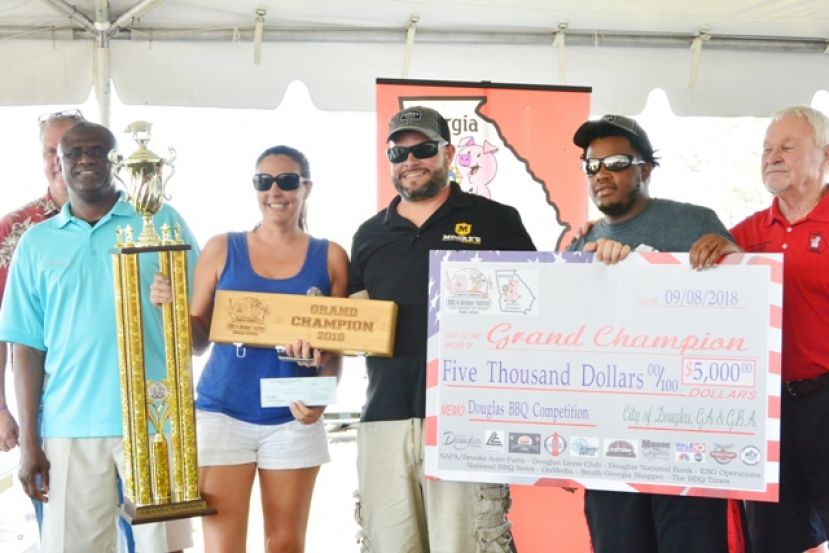 Last weekend, thousands of visitors flocked to Douglas for the ninth year in a row during the South Georgia BBQ & Outdoor Festival. With 44 BBQ teams, 50 vendors, and special attractions, organizers estimate that approximately 4,000 people visited the festival during the two day period. “These teams and visitors love Douglas. We had a great turnout this year at the airport,” says Mayor Tony Paulk. “Our city team worked hard and it paid off with a job and event well done.”

The event began at 1 pm on Friday with vendors, aviation displays, a special wildlife encounter show by Tyler Lott, and a Friday night concert. The concert was sponsored by Broadcast South’s local radio stations 93.5 The Vibe, 101.9 The Rocket, and 106.7 The Buck. Real Radio with Matt Baldridge kicked off the concert with music and giveaways. Two great Georgia bands, The Creekside Band, and headliner Kason Layne took the stage with energetic country-rock sounds until 10 pm.

On Saturday, September 8, the event opened to the public at 9 am with vendors, the NAPA/Brooks Auto car show, motorcycle Dice Run and Battle of the Bikes bike show, aviation displays and fly-overs, food, RVs, and lots of fun! Kids enjoyed the kids area, Southeastern Snake Encounter Show and were allowed to get up close with reptiles and snakes from different regions of the United States. The sky was alive on Saturday with fly-overs and HUEY helicopter rides. The NAPA/Brooks Auto car show was organized by our local NAPA/Brooks Auto Parts store. Car show organizer Josh McCarty and Brooks Auto’s team had over 35 entries. Best of Show winner was a 1971 Chevy Nova SS owned by Ron Roberts of Tifton, Best Engine winner was a 1979 Corvette owned by Tommy Dix of Rhine, Best Paint was a 1968 Chevy Camaro owned by Mike Torpea of Douglas, Best Interior was a 1970 Ford Mustang owned by Mark Vickers of Ambrose and People’s Choice was a 1975 Volkswagon Beetle owned by Emily Dennis of McRae-Helena.

The Douglas BBQ Cook-Off closed out the day with 44 teams that competed for over $20,000 in prizes and cash. Georgia Henderson and her team, along with Georgia BBQ Association (GBA) representatives, put together one of the best competitions in the South Georgia area. Teams competed in three divisions: Pork Loin, Pulled Pork, and Pork Rib. The cook-off also had an ancillary category, Brisket. First place in Pork Loin was Forget Me Not BBQ from Merritt Island, Fla. First place in Pulled Pork was Holy Smokes from Dublin. First place in Ribs was Rescue Smokers from Sycamore. The reserve grand winner was We Want Que from Hiram and the overall grand winner was Holy Smokes BBQ. For a list of all the winners and more photos, please go to http://www.cityofdouglas.com/bbqfest or like the city’s Facebook page at https://www.facebook.com/SoGaBBQFest/.