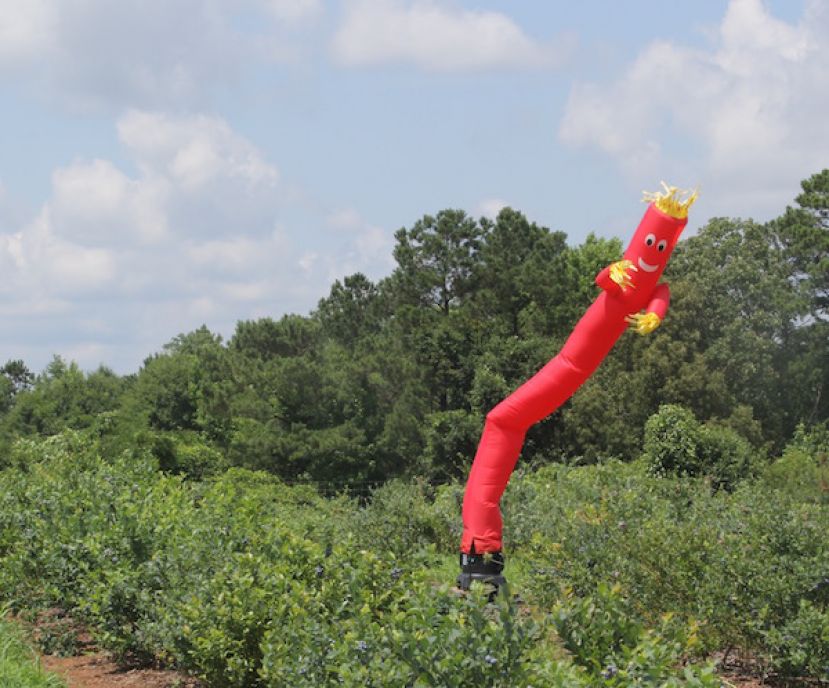 Submitted photo University of Georgia blueberry scientist Scott NeSmith has to keep birds away from his blueberry crop so that he can research and breed new varieties for Georgia growers. His latest trick — using a dancing, inflatable tube man to scare the birds — may lead passersby to believe that the UGA Griffin campus is selling cars.

Farmers have used scarecrows to keep birds away from field crops for more than 3,000 years.

He’s not a farmer, but University of Georgia blueberry scientist Scott NeSmith still has to keep birds away from his blueberry crop so he can research and breed new varieties for Georgia growers. His latest trick — using a “dancing man,” or a dancing, inflatable tube man, to scare the birds — may lead passersby to believe the UGA Griffin campus is selling cars.

“We cover smaller plots of plants with netting to keep the birds out, but you can’t do that in larger areas,” said Ellis Moncrief, NeSmith’s research coordinator. He cares for the UGA blueberry plants on a daily basis.

NeSmith must have berries for his research. He evaluates their size, taste and durability, among other traits, to determine which plants he will include as parent plants in his breeding program.

“It is so important to control the birds because we have only a handful of fruit to evaluate from a single, small plant. If we let birds help themselves, it means we may not be able to evaluate a potential new variety,” NeSmith said. “We only get one chance per year to decide what to keep or throw out from our new plant material.”

It is essential to keep the birds away from the blueberries on the earliest ripening plants. At this time in the blueberry season, there are often more birds than fruit.

Moncrief came up with the idea to use the dancing man, like those often seen at car dealerships, and NeSmith was up to trying it. The blueberry research field is also equipped with an automatically firing carbide air cannon to help keep the birds away from the berries. The cannon produces a thunderclap-like sound to deter birds and other wildlife and is among the tactics used at airports to scare birds away from aircraft.

At the UGA blueberry research plots, the goal is to keep the birds away from the plants until all of the varieties begin to ripen.

“Once they all start producing fruit, it doesn’t really matter because then there are enough berries for our program and the birds,” Moncrief said.

For more information on Georgia blueberries, go to https://t.uga.edu/4i3.

Sharon Dowdy is a news editor with the University of Georgia College of Agricultural and Environmental Sciences.