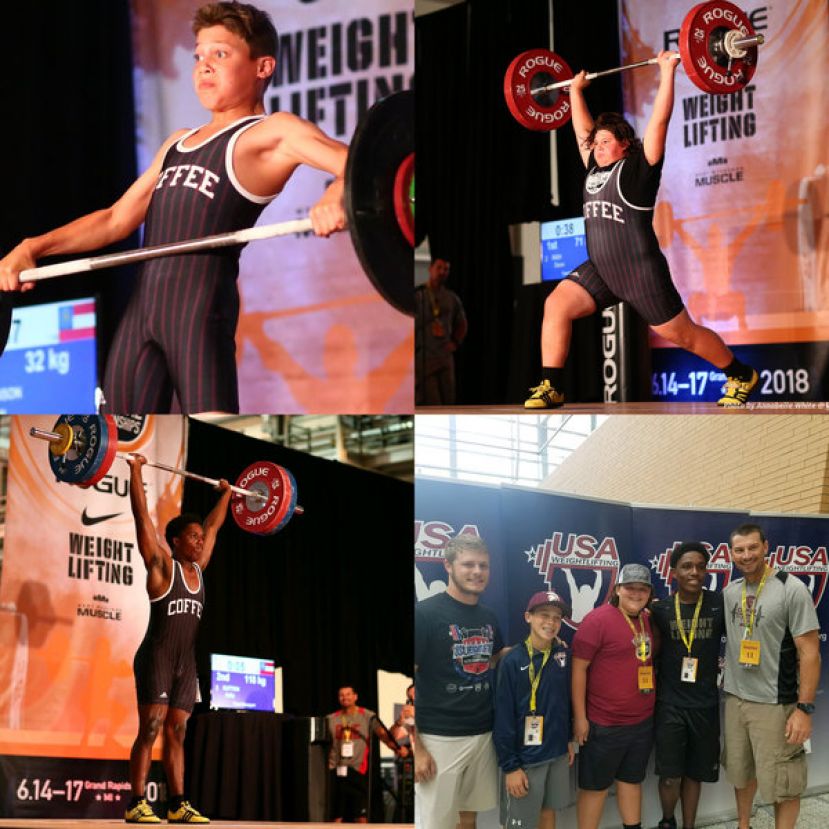 On June 15-17, three Coffee County student-athletes traveled to Grand Rapids, Michigan to compete in the USA Weightlifting Youth National Championships.  This competition is the culminating event for lifters ages 17 and under. In order to qualify for the event, lifters must make a qualifying total in their respective age group and weight class in a sanctioned USA Weightlifting meet. The competition consists of two lifts known as the snatch and the clean and jerk. Lifters are given three attempts in the snatch and three attempts in the clean and jerk. The weight for the best snatch and clean and jerk are then added together to make the lifter's total. The three young men were members of this year's "Overall Boys" National Championship Team.

Range Robinson, who competed in his first national championship, lifted in the 13 and under age division. Robinson placed 5th in the 39 kilogram (kg) class with a 36 kg snatch, 47 kg clean and jerk, and 83 kg total. He was 5 of 6 on lifts for the day. Robinson had a new "PR" (personal record) in the clean and jerk and total and came up just shy of earning the bronze medal.

Dane Rish, who competed in his second national championship, lifted in the 13 and under age division.  Rish placed 5th in the 69+ kg weight class with a 60 kg snatch, 76 kg clean and jerk, and a 136 kg total.  He was 5 of 6 on lifts for the day. Rish had new PR's in the snatch, clean and jerk, and total and also narrowly missed earning the bronze medal.

Coach Mike Booth would like to thank the Trojan Touchdown Club, Premium Waters, and Robert Fender Chevrolet for helping sponsor the trip. If you have any questions about the Coffee Weightlifting Team or Olympic Weightlifting, please feel free to contact Coach Booth at 229-325-5037.