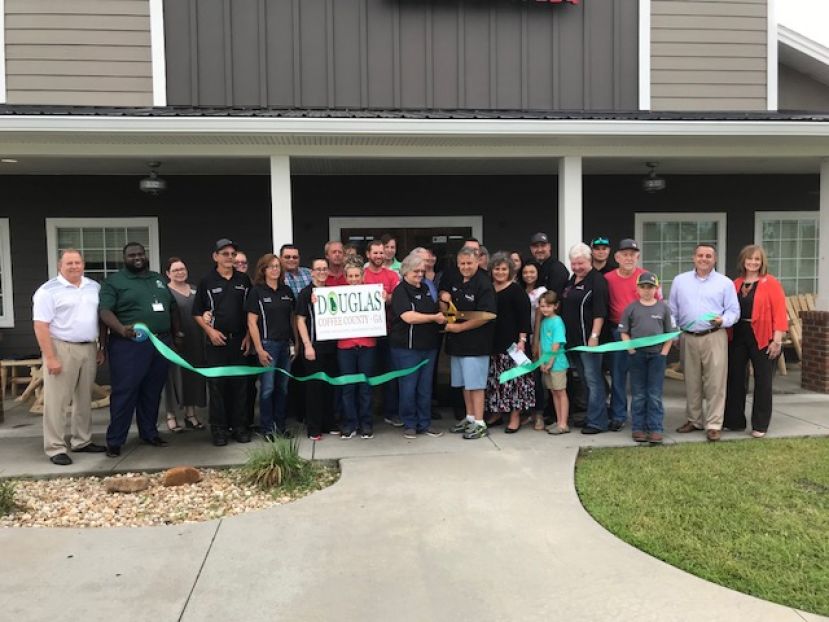 Robert Preston Jr./DouglasNow.com Hog N' Bones, formerly Jerry J's, will open its doors for business at 6 a.m. Friday. Wednesday, in conjunction with the Chamber of Commerce, the restaurant hosted a ribbon cutting and offered a sampling of its new menu items.
Hog N' Bones opened its doors Wednesday afternoon, if only temporarily. The restaurant formerly known as Jerry J's has undergone a facelift and a menu change.
Ownership, however, hasn't changed.
The restaurant is still owned by Darrin Naylor and family and belongs to the same franchise family. The rest will change. Wednesday afternoon, in anticipation of what was supposed be a grand opening Thursday morning -- that's been pushed back to Friday morning due to ongoing construction -- the Hog N' Bones family hosted a ribbon cutting and served a few items from the new menu. A good group of local officials and Chamber of Commerce members attended the ribbon cutting and sampled the new offerings.
Originally a southern cooking-style restaurant under the Jerry J's moniker, Hog N' Bones is now a barbecue restaurant through lunch and supper. Breakfast isn't changing. The same great breakfast dishes you loved at Jerry J's will be available at Hog N' Bones as well.
Give the Naylors one more day to finish up the renovations. Then pay them a visit early and often beginning Friday morning. You'll be glad you did.
Tagged under