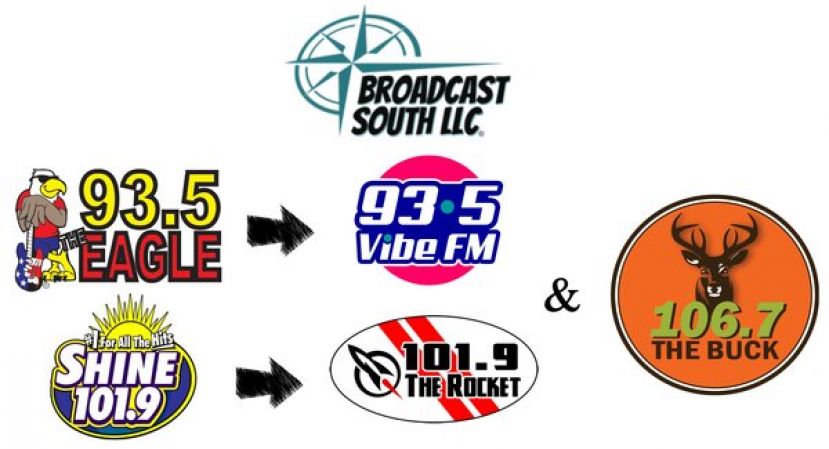 2018 brings about new and exciting changes for Broadcast South. You might remember their names from previous radio segments; you might even recognize their voices -- Matt Baldridge and Ashleyn McQuaig return to the Broadcast South family.

But wait there’s more. Matt, managing partner of Broadcast South, revealed to DouglasNow that his first order of business was to modify two stations to expand its music genres to reach a larger audience. Shine 101.9 which was a Today’s Hits or Top 40 radio station switched to 101.9 The Rocket, ‘Everything that rocks’, which plays different varieties of rock music. What was formerly known as 93.5 The Eagle (WVOH) is now the all-new 93.5 Vibe FM which plays all the hot hits and throwbacks. “The whole idea was to stir some excitement in the area,” said Matt, in response to the changes he made.

That’s not it -- Broadcast South is proud to announce its recent expansion with 106.7 The Buck (WOKA). Most remember Matt from when he hosted morning segments on Shine 101.9. Well after leaving the radio market for some time he finally returns back to South Georgia morning radio. Matt and Ashleyn will be featured on the all-new 93.5 Vibe FM (WVOH) live from 6-10 a.m. on the ‘Real Radio with Matt Baldridge’ show.  In addition to their new morning show, they will continue to host their afternoon segment on 106.7 The Buck from 3-7 p.m.

Don’t worry, The JohnBoy and Billy Big Show along with ‘The Afternoon Ride with Paul Sullivan’ followed the new frequency change and can now be heard on 101.9 The Rocket.

“We are excited about radio in Douglas and South Georgia in 2018 and look forward to providing the best entertainment for our listeners and return on investment for our advertisers,” said John Higgs, President of Broadcast South.