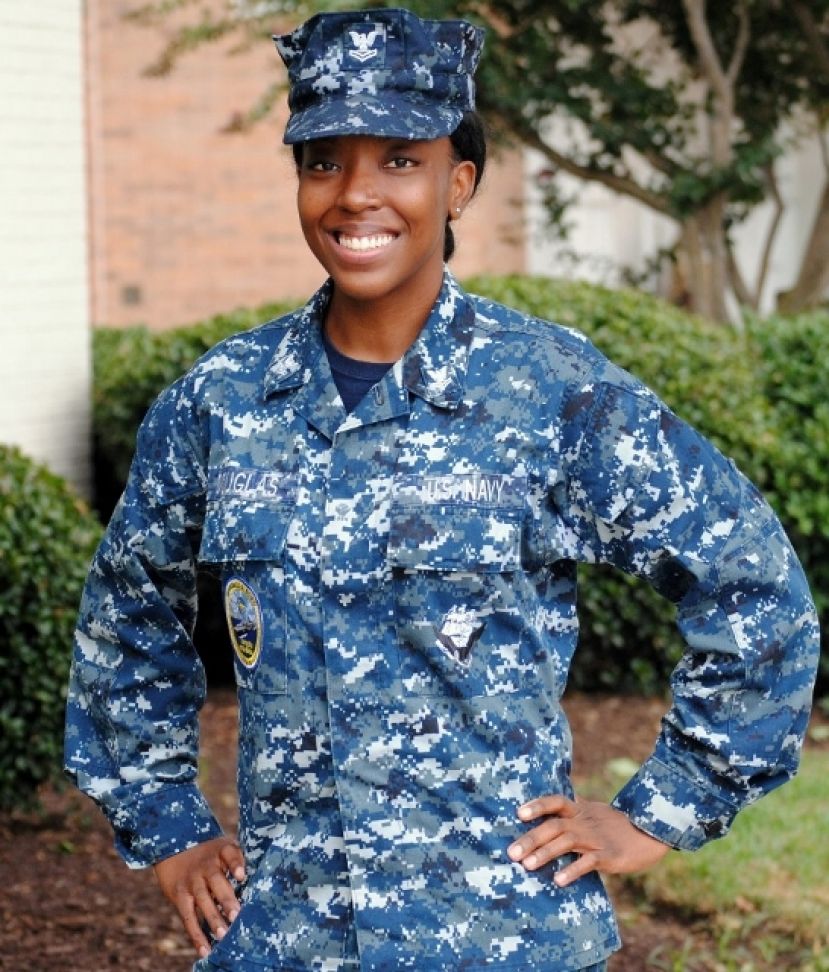 A Douglas native and 2008 Coffee High graduate is serving in the U.S. Navy as part of a hand-picked crew charged with bringing the Navy's newest aircraft carrier into service.

Petty Officer Second Class Deandra Douglas, who enlisted four years ago, is a personnel specialist aboard Pre-Commissioning Unit Gerald R. Ford (CVN 78), the first ship in its class and the successor to the Navy's Nimitz-class aircraft carriers that have been in operation for the last half century.

Douglas, the first in her immediate family to both earn a college degree and join the military, and the rest of the 1000-sailor crew are slowly bringing the ship to life, a crew that will eventually grow to more than 4,500 when the ship is at sea. When complete, the aircraft carrier, powered by two nuclear reactors, will measure more than three football fields long at 1,092 feet in length and will weigh more than 100,000 tons. It will be capable of sailing at nearly 35 mph and will carry more than 75 Navy aircraft.

"Petty Officer Douglas plays a vital role in preparing our nation's newest and most technologically advanced warship for sea," said Ford's Commanding Officer, Capt. John F. Meier. "We have the opportunity to build this command with the ideals of our namesake and we are creating the command climate and a culture of excellence that we have always wanted. This crew is setting that standard, a standard that will last for the 50-plus year life of the ship."

As one of the sailors who will commission the ship, Douglas has the opportunity to see firsthand the innovations being incorporated into the design of the ship; from a redesigned flight deck to allow for more efficient aircraft operations to equipment that requires less maintenance.

As the crew grows and works toward the goal of joining the fleet in 2016, Douglas and other Gerald R. Ford sailors will be will be accepting spaces on the ship, training to operate it, and building a legacy that will last beyond their lifetimes.

Training for the crew has to come from some unique sources. There are no Navy schools for some of the new equipment, so the crew is partnering with Huntington Ingalls Newport News Shipbuilding and other vendors to master the new systems.

"This is a unique opportunity to see firsthand how the systems are installed and tested, which is an advantage that future crews won't have an opportunity to experience," said Meier. "Petty Officer Douglas and her shipmates are becoming the subject matter experts. They are working hand in hand with the shipyard throughout the testing phase and in turn teaching the Navy how to operate this new class of aircraft carrier.

As a 24-year-old with numerous responsibilities, Douglas said she is learning about herself as a leader, sailor and a person. "I've matured a lot since I joined," said Douglas. "I've learned how to handle tremendous responsibility. I've also learned how to set personal goals and effective ways of achieving those goals, which helps me outside the military as well."

Douglas adds she is ready to accept the sacrifices the Navy and her country are asking her to make. This humbling reward is being a part of something much bigger than she ever expected.

Like the Nimitz-class aircraft carriers that came before it, USS Gerald R. Ford's mission is to protect and defend America on the world's oceans. When the ship deploys, it will bring four-and-a-half acres of survivable, sovereign U.S. territory, increasing the Navy's strike capability and defending the country's interests in any region of the world.

The ship is scheduled to commission in spring 2016.

-Submitted by the U.S. Navy

More in this category: « Joshua Peavy: Looking for a spot in ABC's "Rising Star" finals First National Bank of Coffee County announces 2014-15 Junior Board of Directors »
Login to post comments