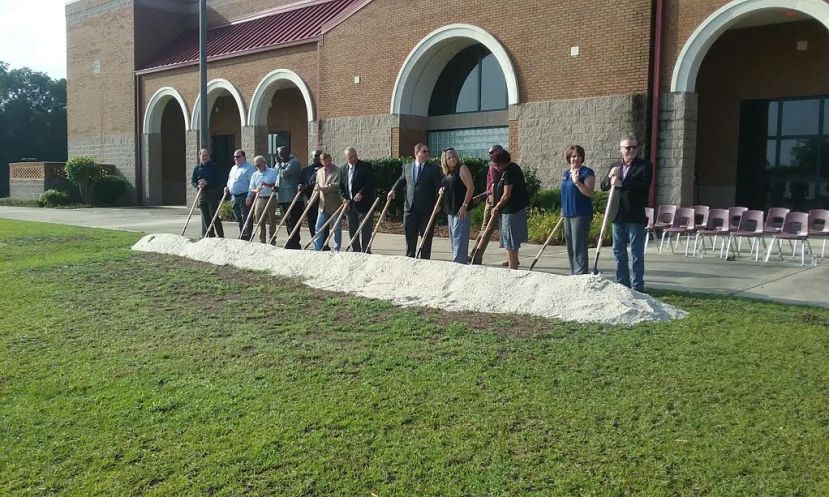 On June 27, 2017 members of the Coffee County Board of Education along with representatives of Jones Construction broke ground for the new Coffee High School Performing Arts Center. The architect for the project is Mr. Vic Suttles.

Principal Rowland Cummings was on hand to introduce Dr. James D. Banks, Jr. who prayed the invocation. Mr. Alex Hill, the Field Representative for 12th District Congressman Rick Allen, was on hand but did not speak publicly. John and Jeremy Jones of Jones Construction were at the ceremony. DouglasNow spoke with Jeremy Jones, Executive Vice President of Jones Construction. Mr. Jones said that the center would seat just under 1,000 and be completed in early 2019. The cost of the project is $10.5 million. Vice Chairman Bryan Preston spoke and on behalf of the board he thanked the community and their eSPLOST contributions which made the arts center possible. Mr. Preston pointed out that planning for the center began soon after Dr. Morris Leis took over as superintendent.

DouglasNow spoke with Ms. Lisa Tierney who is Vice President of the Coffee Alliance for the Arts and the Theater Arts instructor at Coffee High school. Ms. Tierney said that this building has been her dream for her students, “... and they deserve it so much.” She stated that Coffee High is the only school in the region that does not have a performing arts center. Ms. Tierney said the Coffee Alliance for the Arts will be able to hold their Missoula Children’s Theater (MCT) performances at the new venue.  Through MCT, she said, “Every child in Coffee County has the opportunity to participate in live theater. We also bring over the Valdosta State University School of Theater, they perform a children’s show, and every child in Coffee County, their first-grade program comes to see this show. They’ve been going to South Georgia College, but we can fit so many more in here.” Ms. Tierney also looks forward to a revamped Arts Week at Coffee High School.