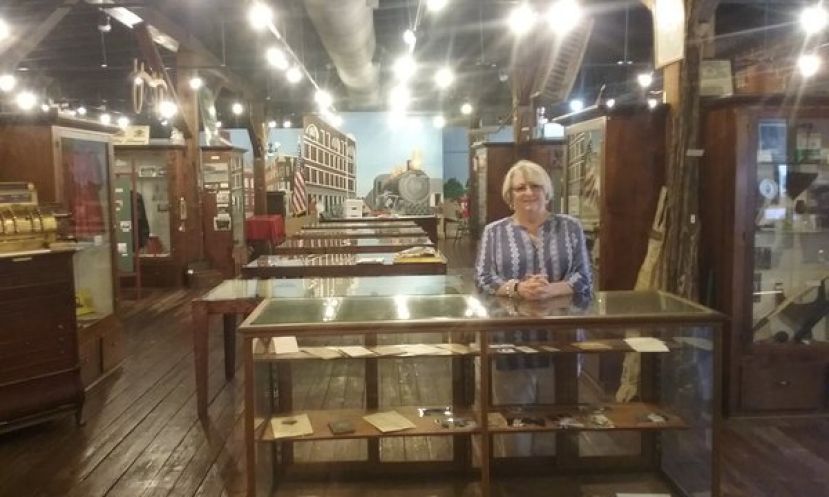 Bradley Bennett/DouglasNow.com Marion Mizell is one of many who help keep the Heritage Station Museum open. This summer, the museum is featuring an informative exhibit on Ada Slater, who just might be considered the first lady of Douglas.

Heritage Station Museum is currently featuring an exhibit focused on the illustrious Ada Slater. The exhibit will be on display until September 22. The museum is located on the Douglas Greenway Trail at 219 E. Ward St. Admission is $1. That dollar buys a wealth of insight and information for visitors.

Ada Clementine Clements was born in 1882 in Telfair County. At a time when women were not allowed to vote, she managed several downtown properties and businesses. She oversaw Upton Plantation, operated the Doucoff Hotel, and served on the board of directors at Union Bank. Many photographs from her life are on display along with personal artifacts and documents. The exhibit depicts a woman who was extremely active in the community. Ada Clements was a business person, mother, and wife. Her impact on Douglas is still felt today.

Young Ada came to visit her sisters in Douglas and married local plantation owner John Ashley, a man 20 years her senior. Mr. Ashley died suddenly in their Gaskin Avenue mansion due to a massive heart attack just days after the sudden death of the couple's infant son. In her efforts to continue running the Doucoff Hotel, the new widow hired an out-of-town lawyer. That lawyer was John Raymond Slater of Valdosta.

Years later Ada married the Valdosta lawyer, a man 17 years her junior. Mr. Slater was a troubled veteran of the Great War. He died by committing suicide in the house on Gaskin Avenue. That house, at 211 S. Gaskin Avenue, now serves as the offices for the Douglas Tourist Information Center.

Heritage Station Museum is housed in a railroad building that served as a depot from 1904 until the 1980's. Soon after initial construction the building became part of the Georgia and Florida railroad. Douglas was at one time the central hub of the Georgia and Florida railroad, connecting Madison, Florida and Augusta, Georgia. The museum features a permanent railroad exhibit with many photos, tools, uniforms, and documents related to railroad work, as well as a miniature steam train.

Other exhibits focus on agriculture, exploring the once thriving cultivation of naval stores and tobacco. Willie Pearl Davis was an educator who seems to rival Ms. Slater in influence and is also featured in an exhibit. Visitors can also find exhibits on vanishing architecture, local sports heroes like Joe Louis Reliford and Greg Walker, as well as specifically African-American achievers.