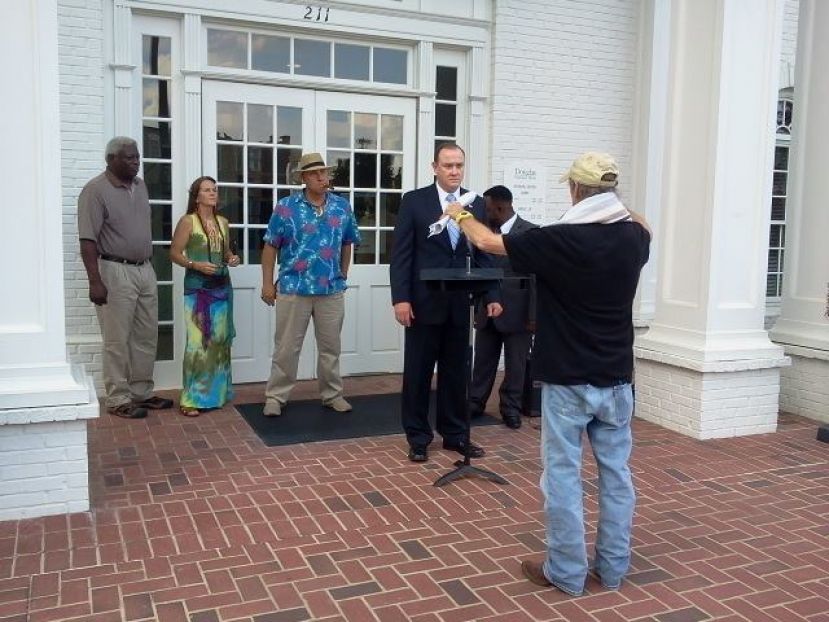 Cast and crew members filming the production of The Last Pedestrian have been working feverishly since Thursday and will complete the three-day project this weekend with a scheduled four-hour shoot at the new offices of the Douglas-Coffee County Chamber of Commerce at the Atrium Event Center.

The project is headed by Vernon Eckleberry, President and CEO of Guiding Star Cinema, LLC. It centers around the story of a corrupt mayor and his city council as they seek to rescue their town from bankruptcy by obtaining a government grant for the purpose of studying and improving pedestrian safety. In order to qualify for the grant, however, their city must have a higher than normal rate of pedestrian deaths among other cities being considered for the grant.

Eckleberry praised the efforts of local officials, individuals, and groups for their cooperation and willingness to make The Last Pedestrian a reality.

"I cannot overemphasize how pleased I am with the cooperation we have received from the city and county governments and their various agencies," he said. "Mayor James Dennis has virtually opened the doors to the city for us. I have every reason to believe that their trust will be rewarded with a product that will put the community in the very best light; and that will bring further moviemaking projects to the area."

The Last Pedestrian will be released in December, 2015, and shown at various film festivals in Savannah, Macon, Atlanta, and the Sonoma Arizona International Film Festival.