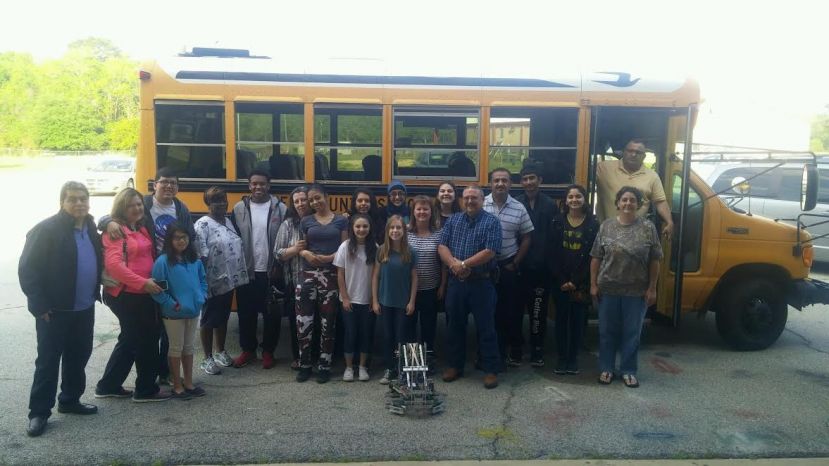 Dr. Rodney Ragsdale/Special to DouglasNow.com Here is the CHS robotics team along with their parents as the prepare to leave for the world championships this week in Louisville, Kentucky.

Coffee High School is going to the VEX Worlds Robotics Competition 2017. The event will be held in the Kentucky Exposition Center in Louisville from April 19 to 22. There they will compete against teams from all over the world with robots and software of their own design and creation. The CHS Robotics Team is Netra Gandhi, Gioia Rosier, Diego Escobar, Paulina Escobar, Leana Atkinson, Alana Atkinson, Samina Patel, Nabil Patel, Xavion Woodberry, Edvin Najarro, Gina Ornelas, Cheyanne Stone, and Ashni Patel.

Diego and Alana are the team captains, and Diego is the unofficial spokesperson. He describes the competition as, “One thing they try to do is challenge you as students, seeing how creative you can be and how you can engineer a solution to a problem basically, the game being the problem and your robot the solution.” There are a total of four robots when the game is in play. At competitions a random list is generated. This enters each team into what amounts to a surprise partnership with another team. The competitors have to find a way to be better than their opponents as they communicate and strategize.

VEX Robotics publishes the parameters for the design of the robot and the specifics of how they must compete every April. This year the robots must fit within an eighteen-inch cube and move an assortment of objects over a wall which separates the teams.

In the competition there are three tiers: Qualifying, State, and Worlds. Strategy is key. The rules of the game do not change as the season goes on, but the design of the robot definitely does. Diego started on the Robotics team as a sophomore. His goal was to make it to Worlds. He’s a senior now, and the team has made it. No one person can build a robot to be competitive. But this year Diego took the robot home with him over summer and that helped. And his team’s robot won the excellence award in Lowndes County. That qualified them for state. The CHS Robotics Team started out with six robots and six teams, but it has been winnowed down to two. Alana Atkinson is the other team captain.

The team’s coach, Dr. Rodney Ragsdale, feels that robotics is a good way to keep kids interested in schoolwork. Making kids stakeholders in the competition gets them involved in their own education.

Diego agrees. He says that going to Atlanta and competing against the schools up there is great for learning. In Atlanta Coffee High competed against Georgia’s top teams. As Diego says, “Your robot may get destroyed, but the other teams are willing to help.” One assumes that the help does not precede the destruction, but is subsequent to it. Diego also says that robotics has given him a jumpstart on some of the other students in his advanced classes. His hobby is Rubix cubes and he has twelve of the puzzles. He plans to go into aerospace engineering after high school. Alana wants to study biomedical engineering. When she’s not participating in FFA, Future Health Professionals, or robotics, she makes floral arrangements.

Diego Escobar says that, “Seeing things not work, and saying, oh wow, I’m an idiot!” is the best way to learn. It seems to be working for the Coffee High School robotics team.