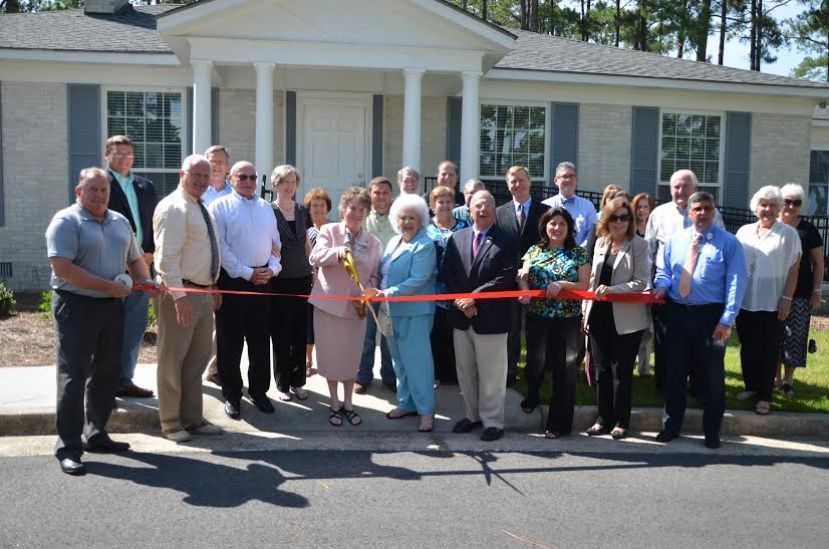 Megan Bennett/DouglasNow.com The Alumni House renovation on the SGSC campus has been completed.

South Georgia State College celebrated the long-awaited completion of an important on-campus project Monday, July 27, with a ribbon cutting at the newly renovated Alumni House. Dr. Jim Cottingham, former Vice President for Student Affairs, delivered a general history of the house and its importance to the college. For many years the Alumni House had served as a home for the presidents of the college and their families. Before being built in the 1950’s, college presidents lived in other buildings on campus including Richey and Davis Halls. It was during the tenure of President William Smith that the college built the house, and he and his family moved into the building from Davis Hall where they had lived for over five years. His daughter, Diana Highsmith, was present at the ribbon cutting and recounted many memories living in the home.

From meeting her husband for their very first date, to her mother’s elegant tea parties, to protecting her beloved cat from the antics of the college students on campus, her memories are that of a loving family home and life within the walls of the Alumni House. Mrs. Highsmith expressed thanks that the building was not simply leveled but repurposed and that the frame that held her family and others still stands. She also donated a painting of the building itself that had been given to her father and been in the family for years, and it now hangs inside the building.

Since 2005, the building had been used for office space and other uses. The last president to reside in the building was Dr. Ed Jackson who left South Georgia College to become president of East Central College in Missouri in 2005. It was after Dr. Jackson’s exit that the University System of Georgia updated its policy concerning on-campus residences and the building was repurposed as extra office space. Improvements needed to be made in the Alumni House to better accommodate the needs of the college, but the history and significance of the building was taken into consideration.

Maintaining the integrity of the space and certain features such as the wood molding and other structures, the building was renovated and now features a catering section, large conference room, office spaces, and a VIP guest bedroom section. Bright natural light floods in from windows and glass paned doors, and recessed lighting provide extra illumination for the space. The Alumni House is as homey and welcoming as ever and ready to be used for special occasions and events for South Georgia State College.