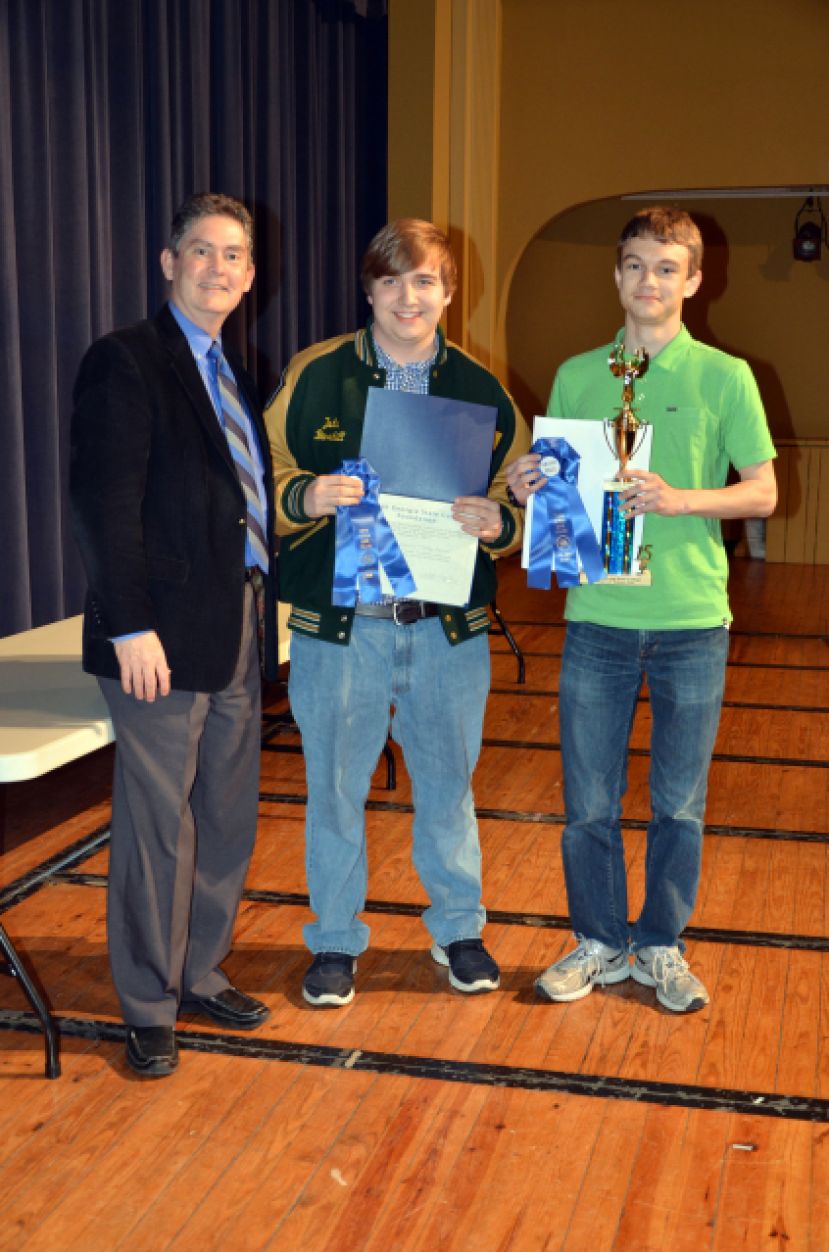 On Feb. 6, South Georgia State College hosted the annual science fair. The best young scientific minds in the region showed up in full force. Students in grades 4-12 from Appling, Atkinson, Brantley, Charlton, Coffee, Echols, Pierce, and Ware counties put their scientific endeavors on display to be scrutinized by a panel of local judges.

Students arrived first thing Friday morning to set up their projects in SGSC’s gym and were able to browse through the projects of other students at the fair. A group of Coffee High School seniors arrived early enough to beat the crowds and chat about their experiences in conducting their experiments. Kyle Ricketson studied the carbon dioxide levels in the ocean and whether or not climate change affected the levels, and if the levels had an effect on the acidity of the water. While he ultimately proved his hypothesis wrong, he thoroughly enjoyed the experiment and enjoys presenting his findings.

CHS seniors Quentin Plummer, working with the effect of silver nanoparticles on bacteria, and Hannah Roberts, working with the proper storage of beef cattle fecal samples, both expressed that the best parts of their experiments were getting their hands dirty. “If you wanna know something, find it out,” said Roberts, summing up her advice to others interested in science. These three seniors all went on to receive ribbons and trophies at the awards ceremony later in the day.

While projects of the elementary school bunch were simpler in nature than the complex hypotheses of the older crowd, the students were no less enthusiastic about their work. Fifth graders Joshua Crews and Tyler Hodges of Wacona Elementary School in Waycross both enjoyed working on their projects. Joshua studied the growth of mold on bread, and Tyler studied the growth of plant bulbs in varying intensities of light. Joshua proved his hypothesis correct, but Tyler proved his wrong. They both enjoyed the experience and learning about everyday problems and solutions: “I liked watching the mold grow and grossing out my brother. It was fun!” said Joshua of his project.

Yulissa Perez, a fifth grader at Midway Elementary School, studied the sturdiness of different types of bridges. She discovered that a trusses bridge is the sturdiest, but all bridges can be supported enough to hold weight. Her favorite part of the experiment was loading the bridges up with the different items to test their weight.

Middle schoolers Tyrra Reed and Avery Hurst, both eight graders at Coffee Middle School, each tested different aspects of the medical field. Tyrra tested the effectiveness of homemade stethoscopes against a real one and found that in a pinch, a homemade tool can suffice well enough for the task at hand. Avery tested the effects of second-hand smoke on indoor plants: “Everyone knows how bad it is for humans, and I was curious about if it was bad for plants, too,” she said. Her studies found that smoke is just as bad for plants as it is for people.

After all projects were set up to the young scientists’ satisfaction, the team of dedicated judges moved in to critique the projects anonymously based on factors like presentation and originality in addition to the scientific merit of each project. The students took this free time before the awards ceremonies to take in a magic show by educational magician Tommy Johns and a science “magic” show by The Science Guy, Dr. Craig Anderson. Johns performed some sleight-of-hand using historical figures such as Hank Aaron and Ellen Ochoa as a narrative that kept his show going. He invited students on stage to help him perform some of his tricks.

Dr. Anderson used the magic of science to entertain the students. His show included freezing items with liquid nitrogen, creating “clouds” to pour over children’s heads, and a chain-and-ring trick that students spent all afternoon trying to perfect.

The most-anticipated segment of the day was the awards ceremonies, where students would see how well their projects faired on their own and against the others at the fair. The big winner for fourth grade was Tanner Murray of Dr. Debbie Gowen’s class at Bethune Middle School for his project entitled “What Floats Your Boat?” First place for fifth grade was Landon Carver of Ms. Carla Chesser’s Nahunta Elementary School class for his project, “Do My Eyes Deceive Me?”