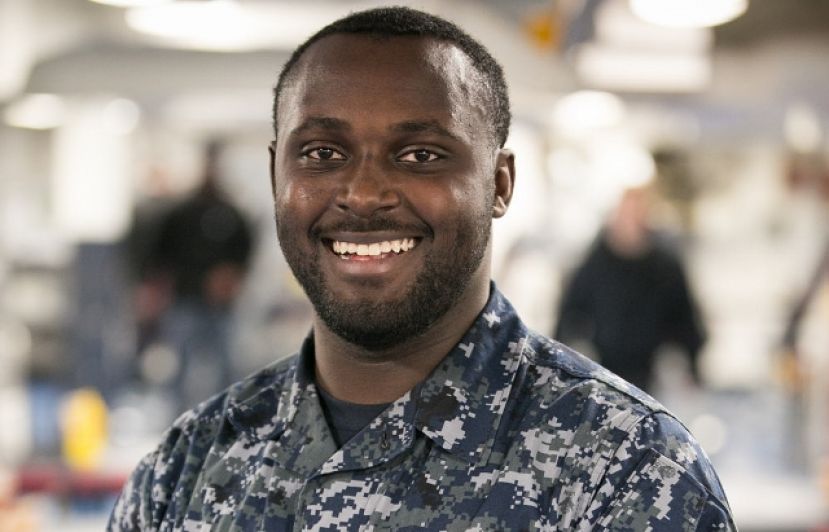 Seaman Recruit Andrew Williams is a yeoman aboard the Norfolk-based ship, a Nimitz-class nuclear-powered aircraft carrier and one of only ten operational aircraft carriers in the Navy today. Named in honor of former President George H.W. Bush, the carrier is longer than 3 football fields, at nearly 1,100 feet long. The ship is 252 feet wide and weighs more than 100,000 tons. Two nuclear reactors can push the ship through the water at more than 35 mph.

As a sailor with numerous responsibilities, Williams said he is learning about himself as a leader, sailor and a person. He added that it is an exciting time to be in the Navy, and serving aboard a ship is something he never expected to be doing just a couple years ago.

“It is really busy on an aircraft carrier. You are forced to learn a lot really fast,” said Williams. He also said he is proud of the work he is doing as part of the Bush’s 6,000-member crew, protecting America on the world’s oceans.

“My job is to keep everyone’s paperwork up to date. I not only do my yeoman work, but I also have a responsibility as a sailor. I have to be qualified in different areas so that I can do my part to help keep the ship running at the top performance possible,” Williams said.

Sailors’ jobs are highly varied aboard USS George H.W. Bush. Approximately 3,200 men and women make up the ship’s company, which keeps all parts of the aircraft carrier running smoothly — this includes everything from washing dishes and preparing meals to handling weaponry and maintaining the nuclear reactors. Another 2,500 or so form the air wing, the people who actually fly and maintain the aircraft.

“I never cease to be impressed with the type and quality of work that goes on aboard this ship each day,” said Capt. Andrew J. Loiselle, the carrier’s commanding officer. “The USS George H.W. Bush team is filled with highly qualified young adults – in many cases, 19 and 20 years old – and they’re out here running a complex propulsion system safely, serving as air traffic controllers, operating sophisticated electronics, launching and recovering aircraft when we’re underway, and keeping this floating city alive and functioning. I can’t express how proud I am to be a part of this team. They performed at the highest level, day in and day out during our recent 9-month combat deployment and are continuing to do so here at home. Their professionalism, dedication and commitment to excellence are second to none.”

USS George H.W. Bush, like each of the Navy’s aircraft carriers, is designed for a 50-year service life. When the air wing is embarked, the ship carries more than 70 attack jets, helicopters and other aircraft, all of which take off from and land aboard the carrier at sea. Powerful catapults slingshot the aircraft off the bow of the ship. The planes land aboard the carrier by snagging a steel cable with an arresting hook that protrudes from the rear of the aircraft. All of this makes the George H.W. Bush a self-contained mobile airport and strike platform, and often the first response to a global crisis because of a carrier’s ability to operate freely in international waters anywhere on the world’s oceans.

As a member of one of the U.S. Navy’s most relied upon assets, Williams and other USS George H.W. Bush sailors know they are part of a legacy that will last beyond their lifetimes.

“It’s mind-blowing how many people it takes to keep an aircraft carrier running. Teamwork is so important in the Navy and on a ship. I’ve made bonds with my fellow sailors that I’ll always have even when I leave here,” said Williams.