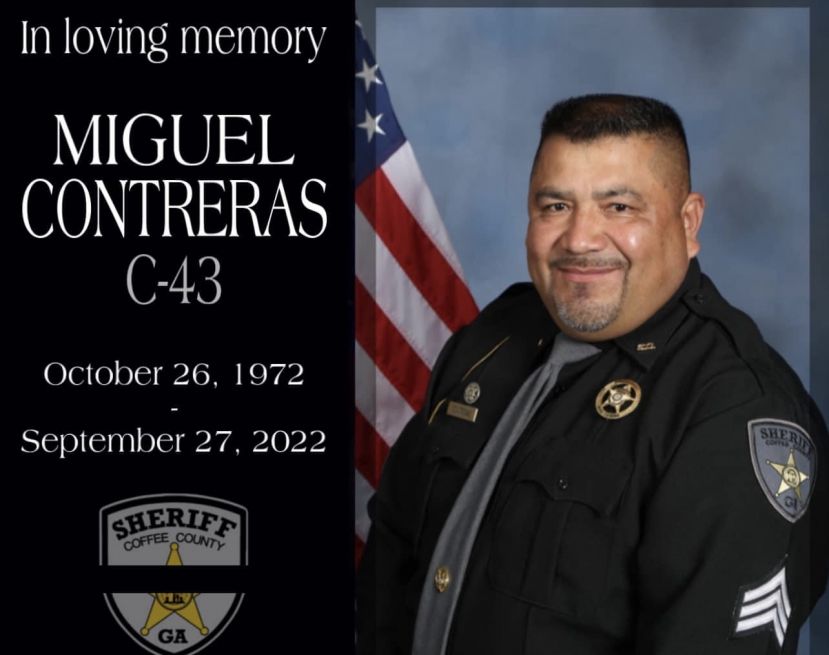 Sgt. Miguel Contreras, a dedicated employee of the Coffee County Sheriff’s Office for almost ten years, succumbed to his fight against cancer this morning at his home.

The CCSO released the following statement:

“It is with the deepest sadness that the Coffee County Sheriff’s Office announces the passing of our friend and colleague, Sgt. Miguel Contreras. Anybody fortunate enough to know Miguel will tell you that he was a hero. Miguel was a hero not just because of any singular act of bravery or self-sacrifice, although there were many, but rather because of his consistent, sustained, and unwavering selfless agape love for others and his devotion to serving his community, friends, and his family. He will be greatly missed. Please keep Sgt. Miguel Contreras’ family in your thoughts and prayers during this difficult time.”

Sgt. Contreras began his career in law enforcement with the CCSO in 2013 as a jail officer and has been employed with the department ever since.

In 2017, Sgt. Contreras was named the CCSO Officer of the Year, an award he was overwhelmingly selected to receive by his coworkers and fellow officers.

At the time, information regarding arrangements for Sgt. Contreras has not been released. An official with the CCSO told DouglasNow they will post the information on their Facebook page when arrangements are set.