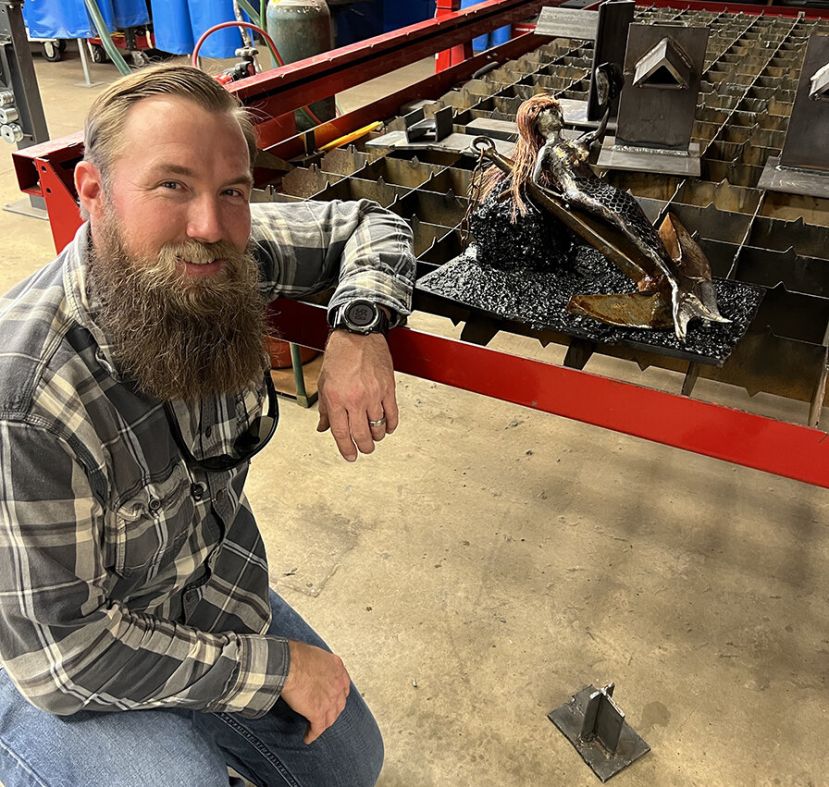 Degner was named the Technical College System of Georgia's (TCSG) Georgia Occupational Award of Leadership (GOAL) Winner for 2022 in April, and in March he earned a gold medal in the Welding Sculpture Competition at the State SkillsUSA competition.  "The entire Wiregrass community is so proud of Ryan and all of his accomplishments," shared Wiregrass President DeAnnia Clements.  "He is such a humble leader and to hear his winning speech and to watch his eyes light up as he speaks of his passion for welding, motivates all who hear."

Degner moved to Valdosta in 2020 after retiring from the Army.  He served our country in different capacities- an engineer, recruiter, instructor, and drill sergeant.  In 2016, while deployed to Iraq, one of his soldiers was a welder and showed him how to use a spool gun to weld the hull of a boat.  "I will never forget when he handed me that tool and I struck my first arc, it was awesome," shared Degner.  This spark became a new burning passion for him that when he retired four years later and relocated to South Georgia he began his search for a welding program.  "Wiregrass offered Welding and Joining technology and had one of the best Veteran's Support Service Centers in the state," added Degner. "I found they would ensure that I would receive all veteran benefits allotted, allowing me to complete my education at virtually no cost to me."

After enrolling in the Welding and Joining program at Wiregrass, Degner became proficient with oxy/acetylene brazing, welding, cutting, plasma cutting, stick welding, MIG welding, TIG welding, flux core welding, and he is currently working on blueprint reading.  One area of welding that he has grown to love is sculptural welding.  This allows him to combine his desire to create art with his welding skills.  He competed in the State SkillsUSA Welding Sculpture competition, where he placed first in the state with a gold medal, and will compete in the national competition in June.  Because of his passion for welding his Welding Instructor, Roy Bramley nominated Degner last fall for the GOAL program. "It only took one conversation with Ryan to learn of his military career and why he wanted to be a welder for me to know that he was going to be one of those special students that only comes along a few times in a teacher's career," shared Bramley. "When it came time to nominate a student for GOAL, Ryan was the first student that came to mind that deserved an opportunity to compete for this honor."

Each college winner competed in the regional interviews in February to determine who would be the three to represent each region.  After being named one of the finalists Degner, along with the other finalists was interviewed by another panel of judges from across the state.  "I had no expectations, and only hoped to do my best if I were chosen as a finalist for the State GOAL competition," shared Degner.  That evening before a crowded room of college leadership administrators, and students from across the state, TCSG Commissioner Greg Dozier called out Wiregrass GOAL Winner, Ryan Degner, as the new 2022 State GOAL Winner.  KIA Georgia gifted Degner with the keys to a brand-new car that he drove home the next day.  Degner will now serve as an advocate for technical education and travel around the state sharing his story and technical education was the best fit for him.

Degner shared, "I wish to express my gratitude to the Technical College System of Georgia (TCSG), KIA Georgia, Wiregrass, and the Wiregrass Foundation; saying 'Thank you!' would never be enough. So, I only hope that I can represent Valdosta, TCSG, and the state of Georgia well and do the best work possible to show my appreciation.  I look forward to being the ambassador for students at the Technical College System and hope to showcase the level of excellence TCSG instills in their students."

In June, Degner will travel to Atlanta and compete against 49 other state gold medalists in the Welding Sculpture competition.  His winning piece is a mermaid crafted with metals, including the fine details of her scales.  After he completes the welding program, he plans to continue his education by enrolling in the Precision Machining and Manufacturing program.  "I will use the skills obtained from both programs to start my own business and provide artistic and structural welding and metal works for commercial and residential clients around South Georgia."

Because of the programs offered at Wiregrass Tech, Degner was fortunate to find a career he is passionate about.  Wiregrass GOAL Coordinator Molly Sumner assisted Degner through his journey and starting in the fall she will begin the process to see who the next college and possible state GOAL winner will be.