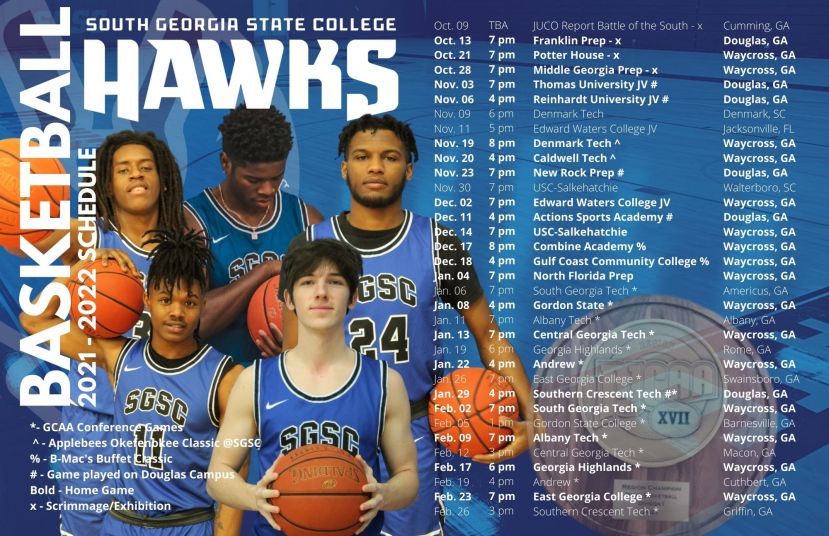 The Georgia Collegiate Athletic Association (GCAA) men's basketball coaches have released their preseason ranking for the 2021-2022 season, and the South Georgia State College (SGSC) Hawks landed in the top position. Last season, the Hawks (23-4, 13-3) captured the GCAA Division I Men's Basketball Tournament Championship to earn an automatic bid to the NJCAA Division I Men's Basketball Tournament in Hutchinson, Kansas. SGSC upset No. 12 Salt Lake Community College 93-89 (OT) in the first round and lost to No. 5 South Plains College 91-80 in the Sweet 16.

Cory Baldwin begins his 23rd year of coaching this year. Baldwin reached a milestone this past season by earning a total of 300 wins during his 15 years as a head coach. He has been at SGSC since 2009 when the former Waycross College hired him to lead its men's basketball program. Joining Baldwin on the coaching staff is DJ Hardy in his 12th season as assistant coach. Student assistant Ben Limbaugh is in his 2nd season with the Hawks. Student managers are Wesley Taylor, a recent graduate from Booker T. Washington High School and Jason Murray from Coffee High School.

The SGSC Hawks will have a scrimmage game on Wednesday, October 13 at 7:00 pm against Franklin Prep from Clemson, SC. The game will be held in the gymnasium on the Douglas campus. Everyone is invited to come out and support the Hawks as they start their new season. The complete schedule for the 2021-2022 season can be found at www.sgsc.edu/athletics/basketball_schedule.cms