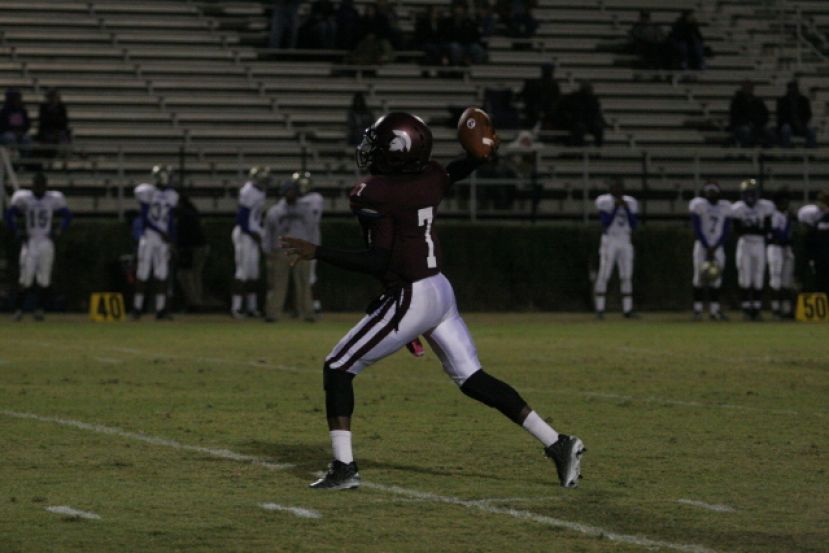 Six different Trojans scored touchdowns in Coffee High’s 42-0 win over the Bradwell Institute Tigers to close out the 2014 regular season Friday night at Jardine Stadium in Douglas. The win improves the Trojans to 9-1 overall and 7-1 in region play.

Coffee shut down Bradwell Institute from the opening kick and had built a 28-0 lead by the half. Over the final two quarters, the Trojans scored two more times to finish off the Tigers.

On Coffee’s first possession, the Trojans drove down the field and ended the drive with a one-yard touchdown by running back Lecarvius Sears. Austin Lord’s point after put Coffee up 7-0. The Trojans scored on each of their next three possessions – on a 23-yard touchdown run by Chris Swinson, a 29-yard touchdown pass from Tyree Paulk to Anthony Fussell (who wore #30 in honor of Malik Sparkman), and 10-yard pass from Paulk to Tray Bryant – to take a 28-0 lead into halftime. When the intermission ended, the Trojans picked up where they left off and scored twice more, this time on a Paulk pass to Jarvis Williams and a pass from Jay Ashley to Jalen Wilkerson.

Next Friday, Coffee hosts a first-round playoff game against the #3 seed from Region 4-5A. Tickets will be on sale at Coffee High School next week.