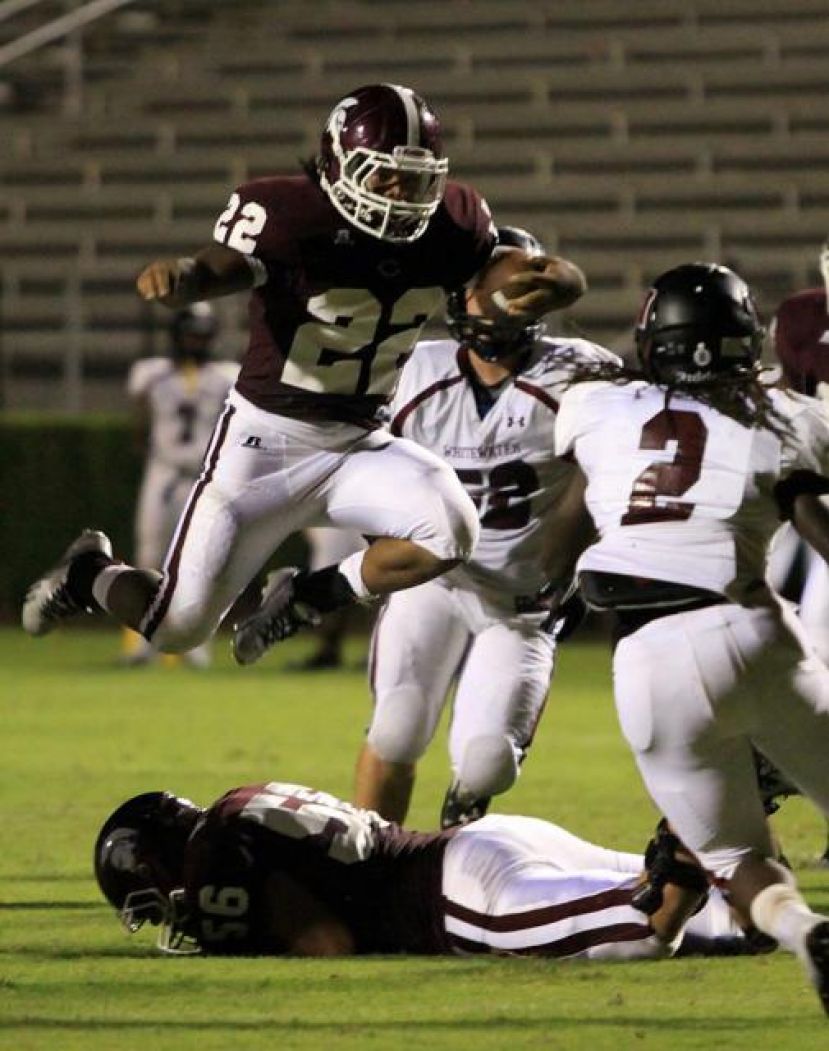 Photo courtesy of the Trojan Touchdown Club Coffee running back Lecarvius Sears, seen here against Whitewater in the 2013 season, rushed for over 140 yards against South Effingham and was a big reason why Coffee escaped Guyton with a 35-28 victory.

It was supposed to be an easy game. The South Effingham Mustangs were 2-3 overall and 1-2 in region play. The Trojans had only one loss and, with the exception of Ware County, had steamrolled everyone they had played. Coffee, however, doesn’t have a good track record in games played when the kids are out of school. Tonight, it was that perfect storm that spells troubles for a lot of teams: A road game, a holiday, a hungry region foe, and maybe the Trojans were looking ahead to next week’s showdown against Brunswick.

Whatever the reason, with just about three minutes left in the game, the Trojans found themselves up by a touchdown against a South Effingham team intent on pulling off the upset. The Coffee defense, which hadn’t played a particularly good game all night, finally stood up and showed a little grit as they stopped the Mustangs and gave the offense an opportunity to close things out.

Running back Lecarvius Sears, who finished the game with over 140 yards rushing, ripped of a 20-yard run with under a minute to go that essentially destroyed the Mustangs’ chances of making a comeback. Following Sears’ big run, the Trojans simply ran out the clock and escaped with a 35-28 win. Coffee is now 6-1 overall and 4-1 in region play.

Afterwards, head coach Robby Pruitt was relieved his team won but didn’t have much to say otherwise. “We did what we had to do to win. Penalties killed us tonight but it was still a big win,” he said before he left the field to join his team.

Coffee has three games left – two of which are at home – in the 2014 regular season. Next Friday night, the 4-2 Brunswick Pirates come to Douglas for a big region contest. The Pirates, who are 3-1 in the region, were off tonight and will have two weeks to prepare for the Trojans. It will be an important game, one loaded with post-season implications.

More in this category: « Coffee takes care of Statesboro 35-7 CCA falls to Piedmont in state playoffs »