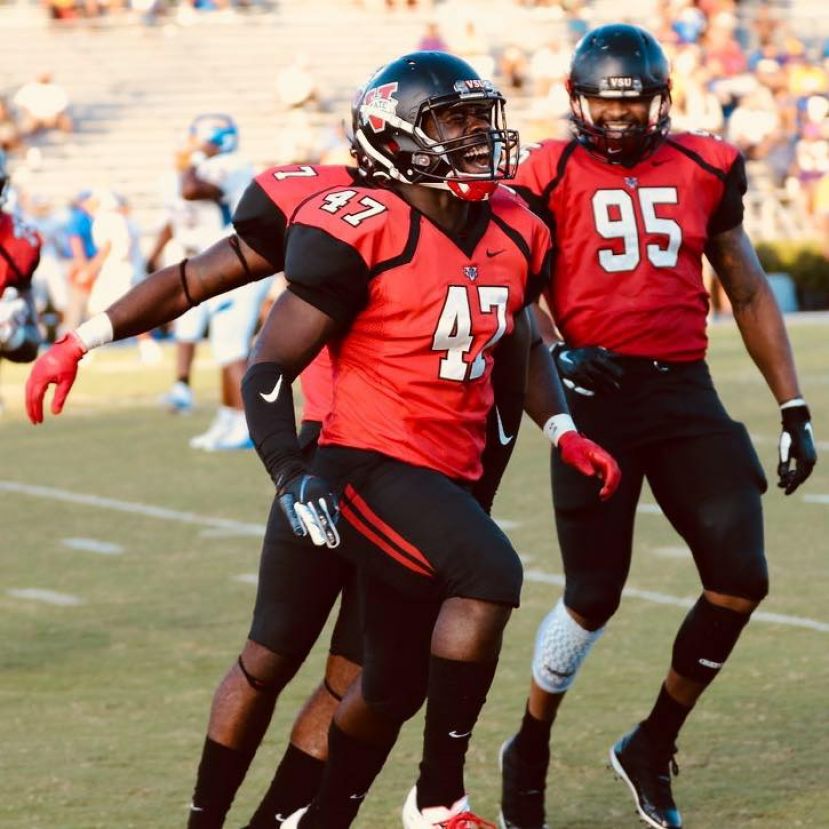 Coffee High’s history on the gridiron is littered with great players. Invariably, when people talk about the greatest Trojans, they often go back to the 70’s and early to mid-80’s. The story here, however, is about Coffee High’s most recent high flyer -- Jameon Gaskin, two-time All-State linebacker and current starting linebacker for the national champion Valdosta State Blazers.

Jameon began playing football at the tender age of five years old. His career began as a defensive linemen and linebacker, but he settled in at linebacker. By the time middle school came around, he was playing running back along with linebacker. “I was pretty good then, too,” Jameon chuckles.

Jameon played linebacker for the varsity while still in ninth grade and stuck with linebacker until his senior year. “We had a bunch of running backs -- Davis, Brewton, Ashley, Dawson. The coaches felt I would better serve the team on defense. I told them I would do whatever I had to.” Jameon would made the All-State team for the 6A classification.

The 2017 Trojan backfield took a few off-season hits as one running back changed schools and another got into some legal trouble. This left the Trojans with a hole to fill in the backfield. “Coach Johnson and Coach Pruitt asked me if I would play both ways to help the team. I said of course.” Jameon would share the backfield with Antonio Dawson and Marquavious Jefferson. “We swapped out on rotation a lot, but I had several games with 25 carries or more.” Jameon rushed for 1,283 yards on the season and tallied over 100 tackles. “I just wanted my senior year to end the way I wanted it to, to give the Trojans a shot to go out on top.” His 2017 is arguably the best season any Trojan has ever had.

Jameon’s journey through his senior year wasn’t an easy one. “At the beginning of the year I weighed 225, but by the middle of the season I was down to 205. I had to do extra conditioning and get fluids during halftime of every game. My mom is a nurse so it wasn’t a problem. Also, Coach Booth’s program kept me loose and strong throughout the season.” Jameon had to shake the rust off his running back skills. “I had to get used to it again. You have to be a lot more patient at running back than at linebacker. Also my parents were in my corner the entire time. Their belief in me means a lot to me, those are the people I play for.”

Jameon got some contacts from some big schools like Georgia Southern and smaller schools such as Albany State. His height was an issue for many of the larger schools. “The coaches were telling me I was too short,” says Jameon. NFL linebackers are typically over 6’1 but plenty of linebackers have been 5’11. Zach Thomas, Jesse Tuggle and Elvis Dumervil are all 5’11. “I hear some of the comparisons but I know I have to be the best ‘Jameon’ I can be.”

Inevitably, Jameon went to the school that offered him first and had stuck by him throughout the recruiting process. “VSU offered first and showed the most faith in me. I knew I had a chance to play. Two weeks after the Lee County game I received the Valdosta defensive playbook,” he says.

Jameon found a family away from home in VSU’s football team. “They treat me like a little brother. They were very hard on me in the beginning since I was a freshman, but I love those guys. The atmosphere here is the best, and we play for each other.” Jameon got the starting job before the second game after the starter went down with a knee injury during the first game. He started every game after that, leading the team in tackles and placing second in tackles for loss. VSU’s season ended by winning the Division II national championship over Ferris State. After the regular season, Jameon was also named the Gulf South Conference Defensive Freshman of the Year.

Everything for a college football player is not football. Jameon embraces the “student” in student-athlete. “Grades are more important than football. You can be the best player but if you can’t make the grades then you won’t be going far. I’m not trying to go back home,” he says. Many high school players only try and get their grades in order junior year or even their senior year when it is too late. “Coaches started talking to me about the sliding scale, I realized the higher my GPA was, the lower my SAT score could be.” The team standard at VSU is a “B.” “If you have a C or a D then you’re probably going to be pushing plates after practice,” he states.

Jameon understands in order to achieve your goals, accepting no is not the answer. “I tell my brother every day, if you want something, you gotta work for it. Nothing is going to be given to you. If you have a goal don’t let anyone tell you that those goals are unattainable. People have told me that I’m not tall enough, not smart enough, but you have to push the negative to the side. Personally, I look to Christ for strength and I put my faith in God,” says Jameon.

Jameon Gaskin is a humble individual, but his senior season should be considered one of the greatest by a Coffee High Trojan ever. Likewise, his demeanor and play during his freshman season at VSU should make Trojan fans proud. Jameon and the Blazers will enter the 2019 season with a loaded roster of returning starters that should help them make another playoff run.