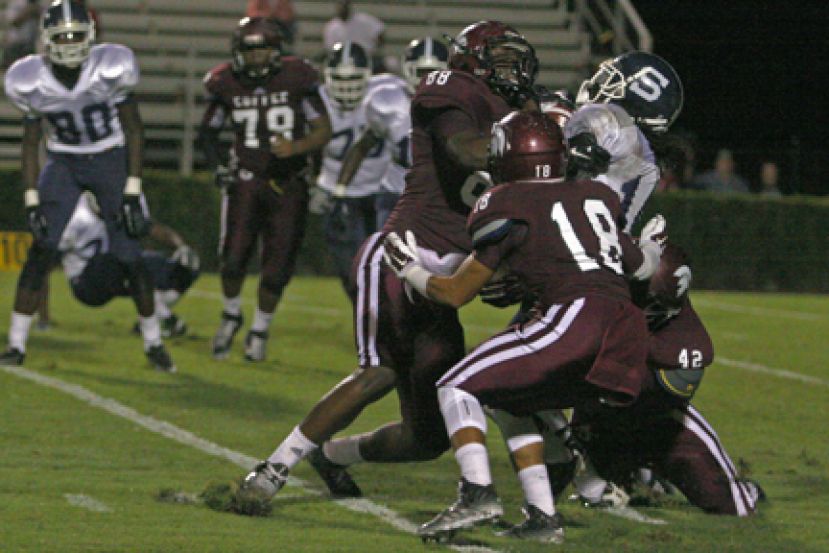 It only took the Coffee Trojans two plays and 40 seconds to get on the board in a region contest against the winless Statesboro High Blue Devils tonight at Jardine Stadium in Douglas. For the rest of the night, it was more of the same as the Trojans cruised to a 35-7 win and a 5-1 record (2-1 in region play).

“We were very pleased with this win. Our defense played well and so did our offense for the most part. We left a few points out there I was pleased with the way we played,” said head coach Robby Pruitt after the game. “We’re going to enjoy this win for tonight. Tomorrow, we’ll get to work preparing for South Effingham.”

The Trojans took the opening kick and, after just one play, scored on a 33-yard touchdown pass from quarterback Tyree Paulk to receiver Anthony Fussell. Austin Lord, whose foot was true all night long, added the point after to give Coffee a 7-0 lead.

After forcing Statesboro to punt, the Trojans drove 76 yards and eventually scored on a five-yard shovel pass from Paulk to running back Lecarvius Sears. Coffee added another touchdown about halfway through the second quarter on a one-yard run by Demetrius Davis. The Trojans had a very comfortable 21-0 lead at halftime.

The second half opened with more of the same. The Trojans stopped the Blue Devils then marched 82 yards to the end zone. Davis scored again, this time on a 21-yard run following a pitch from quarterback Jeremiah Ashley. The score gave Coffee a 28-0 lead over a Statesboro team decimated by graduation and injuries. The Trojans would another touchdown, this one a five-yard run by Chris Swinson, early in the fourth quarter to extend their lead to 35. The Blue Devils finally found the end zone late in the game, scoring a touchdown with just 29 seconds left. It was much too little far too late, and Coffee coasted to a 35-7 win.

The Trojans travel next week to play South Effingham in Guyton.

More in this category: « Trojans nab second region win with 58-26 victory over Effingham County Trojans slip by Mustangs, improve to 6-1 »