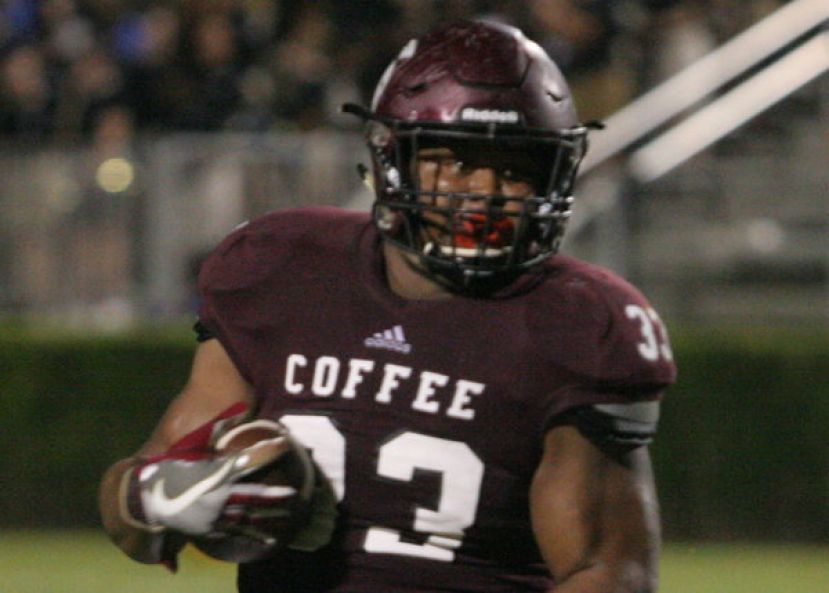 Robert Preston Jr./DouglasNow.com Junior running back/defensive lineman Josiah Killebrew had several big runs Friday night, including one for a touchdown in the Trojans' 20-7 win over the Brunswick Pirates.

It wasn’t pretty but a win is a win. That’s about the best way to sum up the Coffee Trojans’ 20-7 win over the Brunswick Pirates Friday night in the 2018 season opener at Jardine Stadium. The Trojans scored on their first two possessions and carried a 13-0 lead into halftime. Both teams managed just one score apiece in the second half.

A light rain fell on the stadium during most of the first half. The Trojans received the opening kick and launched a 63-yard drive that ended when sophomore quarterback A. J. Wilkerson scored on a 16-yard keeper. Though he didn’t score, defensive lineman-turned-running back Josiah Killebrew rumbled for 44 yards on the first play of the game, crossing midfield and setting up Coffee for the inevitable touchdown. An errant extra point left the score 6-0 Coffee with just over 10 minutes in the first quarter.

After the Pirates bungled a punt attempt, Coffee took over on Brunswick’s 25 yard line. Running back Antonio Dawson broke loose for a score to give the Trojans a 13-0 advantage with 9:42 left in the quarter – an advantage that would hold until halftime.

Coffee’s final score of the night came with 9:58 remaining in the game. The Trojans capitalized on one of several Brunswick miscues on the night, this time on a fumble (Brunswick had three turnovers; Azi Johnson picked off two passes himself). Linebacker Quinton Flowers recovered the fumble on the Pirates’ 44. Coffee drove the short field and wrapped the drive with a seven-yard touchdown run by Killebrew to go up 20-0. Late in the fourth quarter, the Pirates spoiled the shutout with a seven-yard touchdown pass to narrow the gap to 20-7. Brunswick attempted on onside kick but Coffee recovered and ran out the clock.

The Trojans are in action again next week against Salem at Jardine Stadium. Kick-off is scheduled for 7:30 p.m.