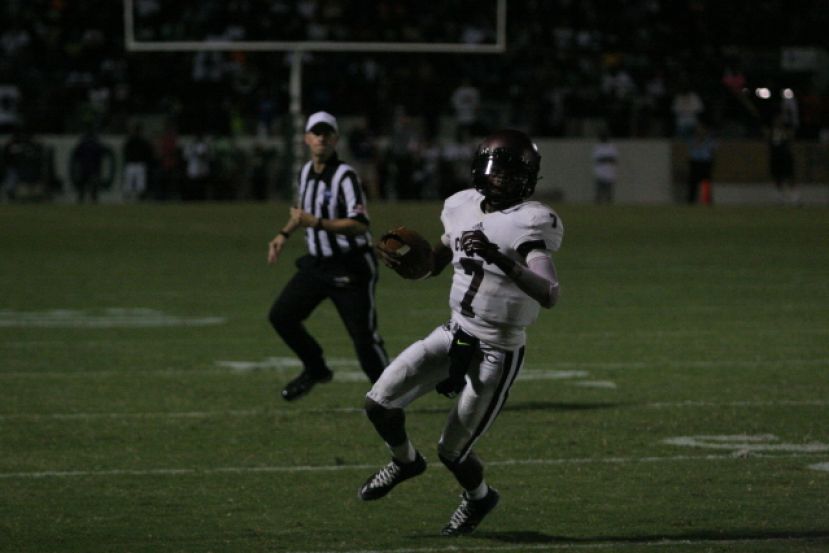 Robert Preston Jr./Douglasnow.com Coffee quarterback Tyree Paulk rushed for one touchdown and threw for another in the Trojans' three-point loss to the Ware County Gators Friday night in Waycross.

It wasn’t the officials, though there were two questionable intentional grounding calls – one on Coffee’s next-to-last play of the game that unfortunately put the officiating crew front and center in a close and hard-fought game. It wasn’t the play calling, though Coffee Trojans’ head coach Robby Pruitt admitted after the game that he should have selected different plays down the stretch. Neither of those factors were the reason why the Trojans suffered their first loss of the year to the Ware County Gators 24-21 at Memorial Stadium in Waycross. Instead it was turnovers; the Trojans turned the ball over twice, one of which resulted in a Ware County touchdown, while the Gators kept their mistakes to a minimum.

Coffee played well enough to win the game. The Trojans had their chances and moved the ball well late in the fourth quarter, scoring a touchdown with 4:53 left in the game to get within three of the Gators.  The Coffee defense then held Ware to a three-and-out before getting the ball back and launching a steady drive from their own 34.

The potential game-winning drive, however, stalled on the Ware 13-yard line. A controversial intentional grounding call on third and three backed up the Trojans to the 28 yard line and gave them a fourth and long with 59 seconds left. Quarterback Tyree Paulk threw the ball to junior tight end Cameron Davis in the end zone. Paulk’s throw, however, was high and the ball fell harmlessly to the Memorial Stadium turf, essentially sealing Ware’s victory in the first region contest of the year. “I cost us that one,” said Coach Pruitt after the game. “I should have pounded the ball at the end. That was just some bad play calling.”

The Trojans struck first, scoring on their second possession after a 52-yard drive ended in a three-yard touchdown run by Paulk. On Ware’s next possession, quarterback Xavier Hollman ripped off a 60-yard touchdown that tied the game at seven apiece with 4:32 left in the first quarter. Coffee scored again with 4:43 to go in the second quarter on a six-yard touchdown run by senior running back Lecarvius Sears. Kicker Austin Lord’s foot was true for the second time and Coffee took a 14-7 lead. Ware, however, wasn’t ready to give up. The Gators scored about a minute later to tie the game at 14. Then, with three seconds left in the first half, Ware kicked a 34-yard field goal to take a 17-14 lead.

Early in the third quarter, the Trojans tried to give the Gators a gift. Ware took the opening kick but couldn’t move the ball against the Coffee defense. The Gators punted but Coffee fumbled the punt. Ware recovered but couldn’t get any points out of the miscue. Ware attempted a 45-yard field goal that missed its mark, giving the Coffee offense the ball at the Trojans’ 20.

The two teams fought to a draw in the third quarter; neither team could put any points on the board. In the opening minutes of the fourth quarter, though, the Gators took advantage of yet another Coffee mistake. With 9:00 left in the game, Deandre Taylor, a junior cornerback for Ware, intercepted a pass on third and 11 and ran it in for a touchdown. The score gave the Gators a 24-14 lead. Coffee would get within three with 4:53 remaining when Paulk hit junior receiver Tray Bryant for a 15-yard touchdown.

Despite the unfavorable outcome, Coach Pruitt was encouraged by the way his team performed. “They played well enough to win. It was a hard-fought game and I’m real proud of their effort. This is the first region game. It’s a long season and we’re not ready to start waving a white flag by any means.”

Next week, the Trojans play the Glynn Academy Red Terrors in another region contest at Jardine Stadium in Douglas. Glynn Academy lost to the Camden County Wildcats 46-17 Friday night and are 2-1 on the season. The Trojans are also 2-1.