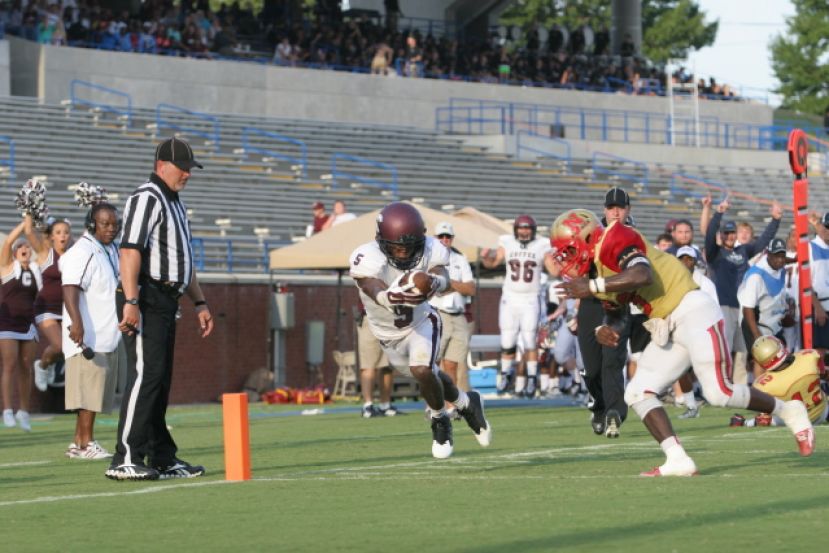 Robert Preston/DouglasNow.com Coffee's Demetrius Davis dives into the end zone just ahead of North Oconee's Zantravious Shields for his third touchdown of the night in the Erk Russell Classic Saturday night. The Trojans defeated the Titans 27-14.

Sophomore running back Demetrius Davis scored three touchdowns and a two-point conversion in the Coffee Trojans’ 27-14 win over the North Oconee Titans in the Erk Russell Classic at Georgia Southern University’s Paulson Stadium in Statesboro Saturday night. While never really tested, the Trojans had to deal with a game-time temperature of over 100 degrees, far too many penalties, and special teams struggles to hold off the 4A Titans.

North Oconee showed early on they were ready for the challenge of facing the Trojans. The Titans launched a 70-yard drive on their opening possession that ended with a short touchdown run by running back Kawon Bryant. The Trojans answered on their next possession when Davis broke a 57-yard touchdown run to get Coffee within one. A missed extra point kept the Titans out in front by a point.

The Trojans held the Titans then went on a 95-yard drive that ended with a seven-yard touchdown pass from quarterback Tyree Paulk to junior receiver Tray Bryant. Davis marched into the end zone on the two-point conversion to give the Trojans a 14-7 lead with 10:02 remaining in the second quarter.

The Titans scored with 5:21 left in the half on a 75-yard drive that included almost 40 yards in Coffee penalties. “We just gave them all those yards on that drive. That was a little disappointing. We were undisciplined tonight but we can fix that,” said Coffee head coach Robbie Pruitt. Late in the first half, the Trojans scored again, this time on a five-yard run by Davis. The PAT was good and Coffee took a 21-14 lead into halftime.

Coffee tacked on another score early in the third quarter when Davis capped a 48-yard drive with his third touchdown of the night. The Trojans missed their second extra point of the night but still held a 27-14 advantage. The Titans threatened on their second possession of the half but the drive stalled at the Coffee 17. Justin Peachey attempted a 34-yard field goal that was blocked by Anthony Fussell. Neither team scored the remainder of the game and the Trojans slipped out of Statesboro with a 27-14 win.

“There was some good, some bad,” said Coach Pruitt following the game. “I was proud of our effort today. It’s different playing a day game, especially in this kind of heat, when you’re not used to it. I was disappointed in the penalties. But we didn’t have any heat-related issues.”

The Trojans play the Savannah Blue Jackets at Jardine Stadium next Friday night. Savannah, a 3A team that won just one game last year, lost 21-14 to Beach Friday night.