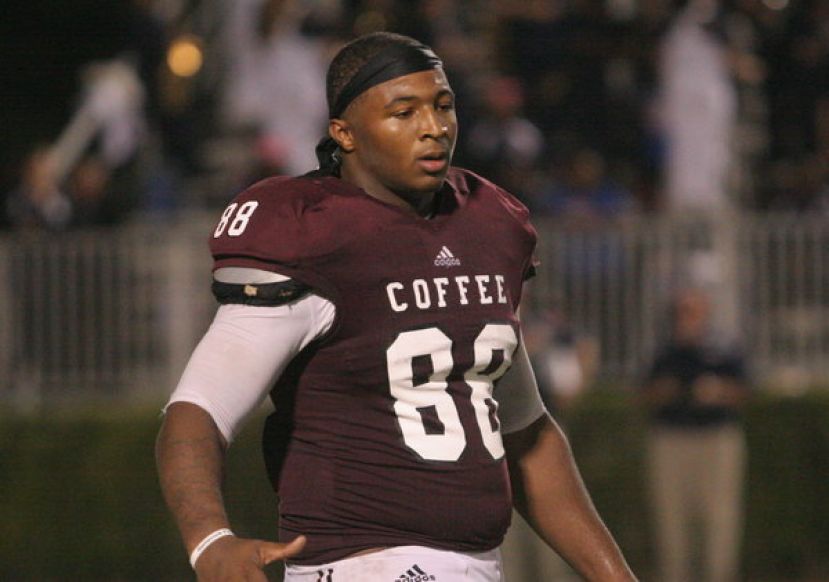 Robert Preston Jr./DouglasNow.com Derrick Newton, pictured after a home game earlier this season, and the Coffee defense played a solid, physical game Friday night against the Lee County Trojans. While they only allowed one offensive touchdown, Lee County still managed to rack up 23 points and win the region championship in the process.

The Trojans won Friday night and captured the Region 1-6A championship. It was just the wrong group of Trojans.

Lee County defeated Coffee 23-7 in Leesburg, dropping Coffee to 3-1 in region play and 6-3 overall. The loss relegated Coffee to the #2 seed in the region while Lee County took the title. Coffee had its chances, particularly in the second half, but Lee proved too resilient, too stubborn, maybe even too good, to let Coffee capitalize.

The game featured little in the way of scoring until the very end. Lee got on the board first just over halfway through the first quarter on a one-yard run by Nico Crews. Through the rest of the first half, Lee managed just two field goals and led 13-0 with just under seven minutes left in the second quarter.

Coffee finally scored after a Lee punt left the offense with a short field. Wade Sumner and crew drove 48 yards and eventually found the end zone on a pass to Dalrone Donaldson. A successful point-after narrowed the gap to 13-7 with 15 seconds left in the second quarter.

Coffee made a few adjustments in the second half and moved the ball fairly well at times. However, Lee always found a way to keep Coffee from scoring. At the same time, the Coffee defense was doing the same thing. Big hit after big hit, Jameon Gaskin, Derrick Newton, Josiah Killebrew, R.J. Ringgold, Hayden Skipper (who grabbed his first interception of the year in the first half), and the Jefferson twins at times brutalized Lee County. The defense was effective and efficient throughout the game, and kept Lee County from getting into the end zone during the second half.

That doesn’t mean that Lee didn’t score, though. With about six minutes left in the game, Elijah Carnes ran a Coffee punt 50 yards for a touchdown and a 20-7 lead. An interception on a pass intended for Milton Jackson on Coffee’s next possession gave Lee the ball at the Coffee 18. The defense pushed Lee back but couldn’t keep them from scoring. Sophomore kicker David Beaver made a 35-yard field goal, his third of the night, with 3:00 remaining to deliver the death blow and secure a 23-7 win for Lee.