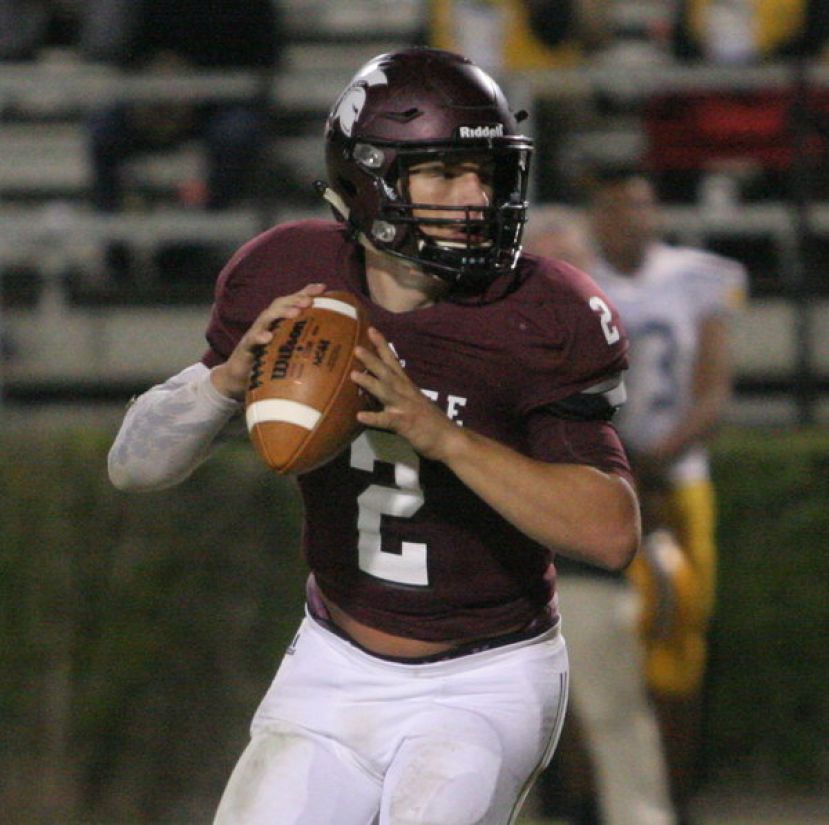 One minute into Friday night’s game between the Coffee Trojans and the Valdosta High Wildcats at Jardine Stadium, if you’d told me that the final score would be 37-14 Coffee, I’d never have believed it. Not the way the game started. Not the way Valdosta came out of the gate clicking on all cylinders. Not the way they went 69 yards on a handful of plays, including a double pass on the first play of the game that chewed up most of those 69 yards, and scored a touchdown 63 seconds into the game.

To make matters worse, on Coffee’s first possession, the quarterback Wade Sumner completed a 75-yard touchdown pass to Dalrone Donaldson – only to have it called back on an offensive pass interference penalty. The Trojans ended up punting then everyone in the stadium held their collective breathe in anticipation of what the Wildcats would do next.

Thankfully, it ended up being nothing. Valdosta wouldn’t score again until the final eight seconds of the game, when the contest was long out of reach.

The 46:49 between Wildcat touchdowns was all Coffee. The Trojans scored five touchdowns and a field goal, all the while keeping Valdosta at bay. Coffee racked up three turnovers and scored touchdowns on each one. The Wildcats recorded one turnover, a fumble, but couldn’t turn the takeaway into points.

The Trojans tied the score early in the second quarter after a Valdosta punt gave the Coffee offense good field position. Running back Jameon Gaskin scored on a 29-yard run. Jose Rodriguez’s extra point tied the game with 10:34 left in the second quarter. After another Wildcat punt set up the Trojans in Valdosta territory, Sumner capped a 45-yard drive with a 33-yard touchdown run. Another successful point after gave Coffee a 14-7 lead with 7:09 remaining in the first half.

Valdosta fumbled on its next possession and Gaskin, who at the time was wearing his linebacker hat, recovered at the Wildcat 40. Sumner repeated what he had just done and took off on another 33-yard race to the end zone. This time Valdosta blocked the extra point. With 5:26 to go in the half, the Trojans led 20-7. With just over two minutes left, the Wildcats attempted a 33-yard field goal that missed. At halftime, Coffee held on to a comfortable 20-7 advantage.

After the Trojans punted on their first possession of the third quarter, Marquavious Jefferson intercepted a Valdosta pass and returned it 54 yards to the Wildcat 21. A big catch by Raekwon Burch moved the ball to the one-yard line. From there, Gaskin rumbled in for his second score of the night. With 7:38 remaining in the third quarter, Coffee was up 27-7.

The 20-point lead felt a lot bigger than it was. But the Trojans weren’t taking any chances. After all, Valdosta has always had a knack for making the impossible look very easy. Coffee added a 23-yard field goal by Poncho Rivas late in the third quarter then a touchdown early in the fourth on a reception by Trey Mizell. Junior defensive back Ty Burkes set up the touchdown with the Trojans’ second interception of the night. Late in the fourth quarter, the Wildcats launched an 81-yard drive that ended with a touchdown with eight seconds left to make the final 37-14.

The win puts the Trojans at 6-2 overall and 3-0 in region play, which sets up a showdown next week in Leesburg against Lee County for the region championship. It’s a winner-take-all match-up; whichever team wins gets the title while the losing team takes second. Lee, which was off Friday night, sits at 8-1 overall and 2-1 in the region. The game will be played in Leesburg and is slated for a 7:30 kick-off.