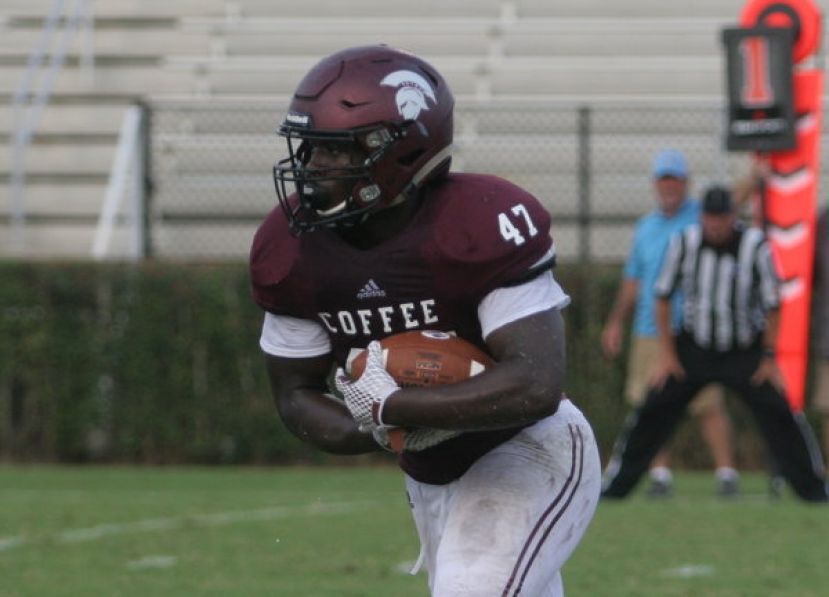 Robert Preston Jr./DouglasNow.com Coffee's Jameon Gaskin, seen above in a game from earlier this season, scored three touchdowns in the Trojans' 52-49 loss to the Warner Robins Demons. Dalrone Donaldson caught three touchdown passes from quarterback Wade Sumner and Jarquavious Jefferson added another score on an interception return for a touchdown as well.

The primary difference this week? The Trojans decided to spot the other team, this time the Warner Robins Demons, three touchdowns to start the third quarter instead of the first. After battling back from being down 49-27, Coffee tied the score at 49, only to see Demons’ kicker Eli Mashurn drive home a 36-yard field goal to defeat the Trojans 52-49 in Warner Robins.

Receiver Dalrone Donaldson and running back Jameon Gaskin scored three touchdowns each, and defensive back Jarquavious Jefferson added a touchdown on a pick six.

The Demons, however, led by quarterback Dylan Fromm (younger brother of Georgia Bulldogs’ quarterback Jake Fromm), refused to give up. After trailing 27-21 at halftime, Warner Robins took advantage of a Coffee punt and three fumbles to open the third quarter. Fromm and company scored on all four possessions to take a very comfortable 49-27 lead with 2:40 left in the third quarter.

Then the Trojans got their act together.

The Coffee offense went on an 80-yard drive late in the third period that ended with a 24-yard touchdown pass to Donaldson to make the score 49-34. Gaskin scored next, this time with about 8:00 left in the game to narrow the Demons’ gap to 49-41. After holding Warner Robins scoreless over the next few minutes, Coffee quarterback Wade Sumner hit Donaldson again, this time from 19 yards out, to bring the Trojans within two. Coffee went for the two-point conversion and made it on a Sumner keeper to tie the game at 49 with 2:36 remaining.

Fromm and the high-powered Demon offense went to work one last time. They took over at their own 15 yard line and moved efficiently downfield. Following an eerily similar script to last week, Jeremiah Colson and Derrick Newton sacked Fromm, setting up a fourth and long with 35 seconds in the game. Fromm found a receiver for the first down, and moved the Demons into field goal range at the same time. After running a couple of plays, Warner Robins opted for the field goal. The Demons called one timeout and the Trojans used both of theirs, presumably in an attempt to give Mashburn’s nerves time to flare up.

The Warner Robins kicker was unfazed. With 10 seconds on the clock, he nailed the 36-yarder to win the game 52-49 for the Demons. “Those three turnovers killed us. But our kids did a heck of a job fighting back. We’ve got to straighten a few things out and we’ve got two weeks to get it done,” said head coach Robby Pruitt after the game.

The Trojans, who have now lost two in a row, are done with their non-region schedule. They get a week off before returning to Warner Robins to open region play on Oct. 13 against Houston County.