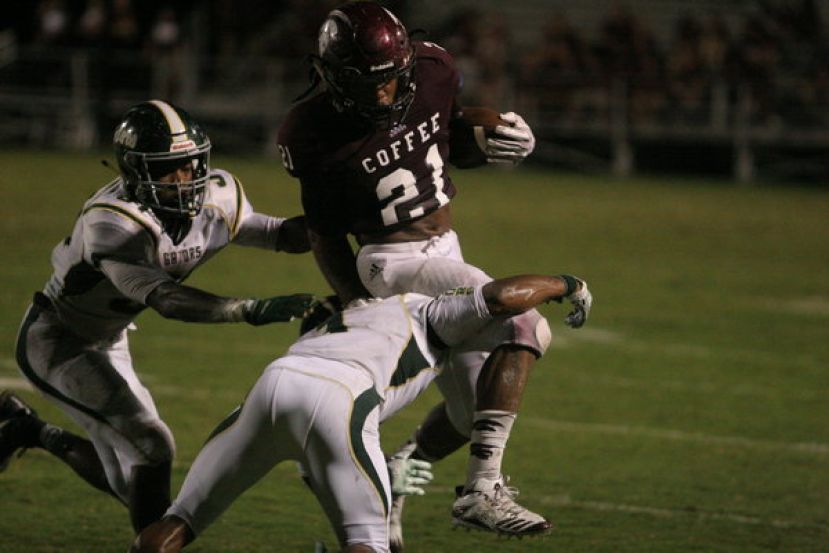 After two weeks of fairly easy victories, the Coffee Trojans seemed to meet their match when the Ware County Gators came to town. Despite poor first half play that had the Trojans down by a point at halftime, Coffee rallied in the third and fourth quarters to defeat the Gators 21-14 in yet another game that had to be moved due to the threat of bad weather.

The Trojan offense that had steamrolled its way through the first two victories sputtered against a Ware County team that seemed to know what the Trojans were going to do before the ball was snapped. Coffee also shot itself in the foot throughout the first two periods, making costly mistakes that kept points off the board.

Neither team scored until the end of the first quarter when the Trojan offense finally came to life. Quarterback Wade Sumner and the rest of the Coffee offense went 82 yards that ended with an eight-yard touchdown pass to Raekwon Burch. The Trojans’ special teams woes surfaced again when Ware blocked the extra point.

Coffee missed another opportunity in the later in the second quarter the offense took over on Ware’s 44 after a Gator punt left the Trojans in great field position. Marquavious Jefferson, platooning once again at running back, broke a 43-yard run that nearly landed him in the end zone. Coffee’s drive stalled at the one-yard line. After plays of no gain and a penalty, the Trojans ended up attempting a 26-yard field goal. It missed. Instead of leading 10-0 in the middle of the second quarter, Coffee was up just 6-0.

On the Gators’ next possession, senior defensive lineman Jordan Knight intercepted a pass and gave the offense another chance. They couldn’t do much and had to punt. Ware blocked the punt and, a couple of plays later, scored and converted the point-after to take a 7-6 lead with 3:34 remaining in the half.

The clock ticked off without anyone scoring again. Ware led 7-6 at halftime.

Coffee took the kick to open the third quarter. Jameon Gaskin promptly ripped off an 80-yard run from scrimmage that officials called back on a holding penalty. Sumner and company then began a methodical march downfield, chewing up nearly all of the quarter. The Trojans took the lead when Sumner found Dalrone Donaldson on a 27-yard touchdown pass. The Sumner hit Donaldson again for the successful two-point conversion. With 2:01 remaining in the third quarter, the Trojans had a 14-7 lead.

Ware tied the game at 14 with 9:26 left in the game. And so the score remained until late in the fourth quarter, when with under three minutes remaining, Sumner took the snap in the shotgun from the Gators’ six-yard line, raced around the left side and into the end zone. This time, the extra point split the uprights and Coffee had a 21-14 lead with 2:45 remaining.

All the Trojans had to do was stop Ware one last time. The defense stepped up big and forced the Gators to fumble. Senior defensive end Derrick Newton recovered the ball at the Ware 19 to seal the victory for the Trojans.

Afterwards, head coach Robby Pruitt said he was proud of his team for playing hard but once again, he mentioned the Trojans’ penchant for not making the most of the opportunities opponents give them. “We left so many points on the board in the first half. We dropped passes and we missed blocks. We played harder in the second half. We really didn’t do anything different; we just made the plays in the second half that we missed in the first,” he said. “We don’t do a good job of going for the jugular and putting teams away. We didn’t execute on simple plays tonight. We’ve got to learn to put people down when we have the chance.”

The Trojans get a much needed week of rest next week. They return to action on Friday, Sept. 15 against University Christian (Jacksonville, Fla.) at Jardine Stadium. Kick-off is set for 7:30 p.m.