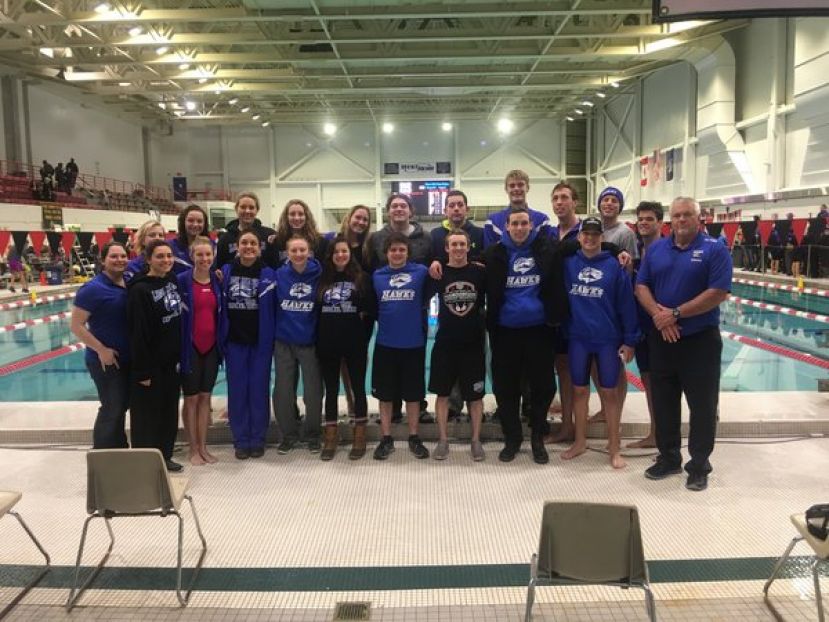 Submitted Photo The SGSC swim teams -- the women finished second in the country while the men came in fourth.

The 2017 NJCAA Swim Meet is complete and the South Georgia State College women's team has finished second in the nation for the second year in a row. SGSC's women defeated Iowa Central Community College and Southwest Oregon Community College by a score of 563 points to IOCC's 498 and SWOCC's 480. Monroe Community College from Rochester, New York rounded out the top five for the women. SGSC's men's team placed fourth in the meet by just 36 points to second place Southwest Oregon and third place Iowa Central. Indian River won both men and women's sides of the competition for the 45th consecutive year.

"It was fantastic that our women were able to achieve their goal of a second straight second place finish in the National meet," commented Head Coach CM Jenkins. "Our men slipped to fourth, but they really had a great meet and gave it their best effort. I am proud of both our men and women for a great showing at this meet. They represented themselves, our program, and our Institution in the highest fashion."

During the four day meet the team set eight school records in the individual events and had several second place finishes in the relays to Indian River. Each day's recap is below.

At the conclusion of the first day,  South Georgia State College men's and women's swim teams had positioned themselves nicely to contend for the goal of finishing second again in the rankings of the National Junior College Swim Meet being held in Buffalo, NY.

SGSC's men were in second place with a small lead of 102 points to Southwest Oregon's 101, Lincoln College's 100, and Iowa Central's 99. The women tallied 116 points and placed fourth to SWOCC's 128, and Iowa Central's 123. "Indian River is running away with the meet again as usual, but both our men's and women's team are in a fight for the second place ranking," commented Head Coach CM Jenkins. "The race for second should seesaw back and forth throughout the week."

Finishing in the top eight after day one for the men were Andrew Brown with fifth place in the 200 IM , Michael Diorio capturing sixth in the 1000 freestyle, Kyle Martin winning fifth in the 50 breaststroke, and Zac Elz setting a team record in the 50 free with a time of 20.99.

The second day of Nationals for the South Georgia Swim Team proved very beneficial for the women's team but not quite as good for the men. The women took a commanding 50 point lead over Iowa Central and Southwest Oregon Community Colleges while the men slipped a little. After leading by just one point on Wednesday the men slipped 42 to points for a total of 203 to the same two schools who are tied with 245 points.

Leading for the women was Kiana Ocasio-Molina with a third place finish in the 200 IM AND a new school record time of 4:44.61. Also scoring in the IM was Jessica Dunton in fifth place and Miranda Henderson in eighth. Sophomore Nikki Daley also shined for the Hawks by breaking the four year old 200 free style record with a time of 1:57.86 while Brittany Herndon captured seventh and Bekah Morris won eighth in the event. Morris took fourth place in the 50 yard backstroke and freshman Skylar Tafelski got on the board with a eighth place finish in the event.

For the men's team, freshman Andrew Brown had a sixth place finish in the 400 IM and Kevin Bohr placed ninth. Freshman Zac Elz placed eighth in the 200 freestyle.

The Hawks contributed a lot of points to their cause in two important relay events. In the 200 freestyle team event, Molina, Henderson, Morris and Daley tallied a second place finish while Elz, Kyle Martin, Brown and Anchor Jake Davis finished third. Both men and women finished third in the 400 medley relay. For the women it was Molina, Delaney Smith, Dunton, and Daley placing third and Elz, Brown, Trace Austin, and Davis holding the same position.

Leading the women on day three was Jessica Dunton. The freshman from Carrolton had two top eight finishes. She placed sixth in the 100 IM and broke the school 200 butterfly school record with a time of 2:10.34 with a third place finish. Also top 8 for the women were Kiana Ocasio-Molina in the 200 back stroke in fourth place and Bekah Morris right behind her with a fifth place finish in the same event. Delaney Smith had a sixth place podium spot in the 100 breaststroke while Brittany Herndon had an eighth place finish in the 500 freestyle.

For the men, Andrew Brown and Kyle Martin both earned top eight in the 100 breast, Brown in seventh and Martin in eighth. The Hawks also had two podium finishes in the 200 butterfly with Trace Austin earning fourth and Micahel Diorio finishing fifth. Martin and Kevin Bohr also earned top 8 spots in the 100 IM. Martin finishing fifth and Bohr finishing eighth.

The most exciting race of the meet perhaps was the women's 800 freestyle relay. After falling behind to seventh place after the first leg, the Hawks women battled back in the race and anchor Nikki Daley out touched the rival Iowa Central swimmer and finished second in the event. Herndon, Molina and Morris were also on the relay.

Nikki Daley had a fourth place finish in the 100 free by setting a new school record with a time of 53.28. Daley also finished in seventh place in the 50 butterfly. The Hawks had three fifth place finishes in the finals. Miranda Henderson finished 5th in the short 50 butterfly event while Brittany Henderson and Michael Diorio also placed 5th in the long 1650 yard freestyle event. Zac Elz had an impressive 100 freestyle swim with a record setting 46.55 in the 100 free and finished in sixth place. Backstroke swimmers Kiana Ocasio-Molina and Bekah Morris added to their podium finishes in the 200 backstroke by finishing fourth and fifth, respectively. Kyle Martin finished fifth and set a new school record of 2:07.56 in the 200 breaststroke while Andrew Brown, seventh,  and Kevin Bohr, eighth,  also scored 8 points in the event.

The Hawks had two fourth place finishes in the 400 freestyle relay on the final day. The women's team of Daley, Morris, Madison Elliott, and Delaney Smith finished fourth while the men's team of Elz, Martin, Brown, and Jake Davis, also placed fourth.

More in this category: « SGSC extends winning streak to seven in a row SGSC basketball advances to semi-finals »
Login to post comments