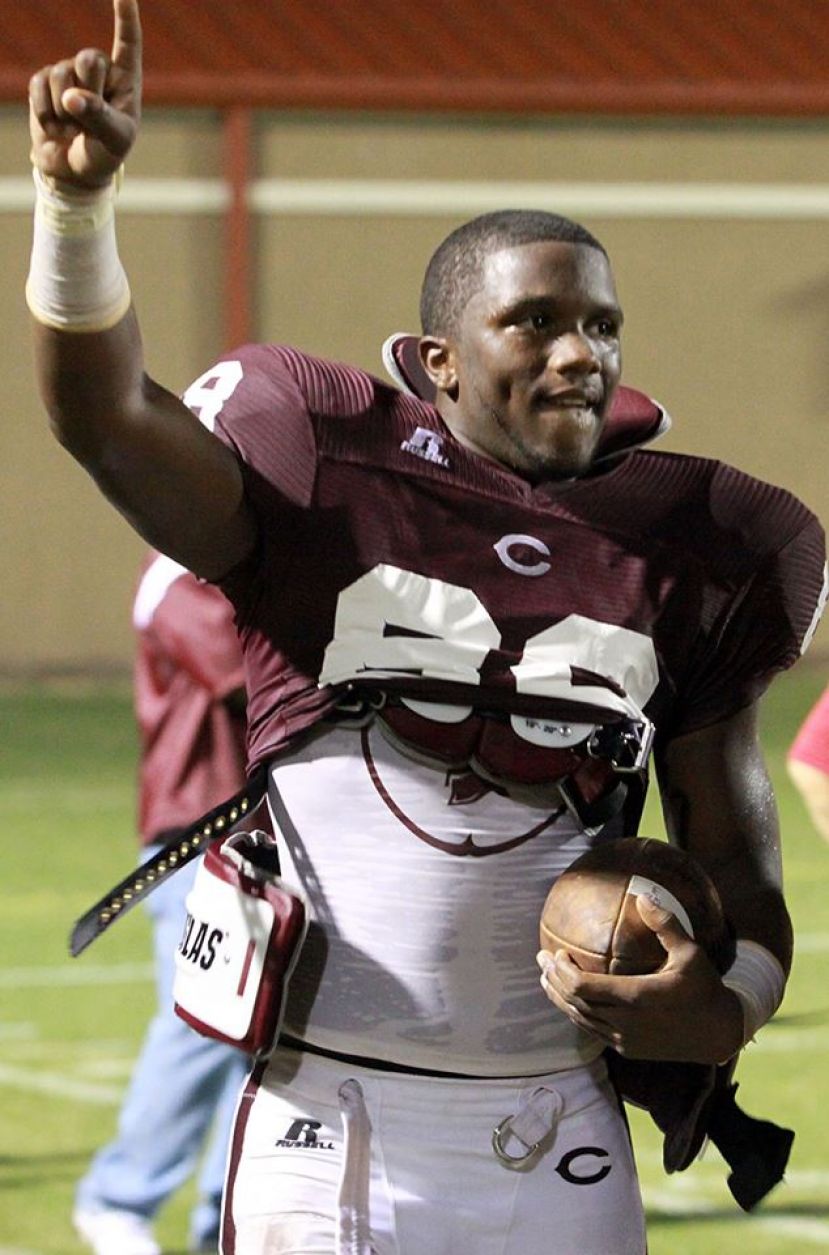 Submitted Photo Coffee High tight end (pictured from a game last season) is one of the most sought-after players at his position in the state.

What a difference a year makes. The Coffee Trojans will compete in a new region and have several new assistant coaches for 2014. The schedule, both region and non-region alike, looks very different. But one thing that hasn't changed is the level of play required to make the postseason. Many Coffee fans are getting ready to make reservations in Atlanta to see the Trojans play in the Georgia Dome in the state semifinals. While Coffee ought to have better chances in Region 3-5A, it's not like the teams in that region are going to lie down and let the former Region 1-6A program roll over them. In fact, head coach Robby Pruitt doesn't think there's that much of a drop-off in terms of talent and competition in the Trojans' new region.

The Coffee Trojans are beginning the third year of Robby Pruitt Era. Thus far, the Trojans are an even 10-10 under Pruitt. The move to 5A pits the Trojans against schools more Coffee’s size but isn’t much of a step down in terms of competition. In fact, a former 1-6A school, Brunswick, will also compete in the same region. And Brunswick defeated Coffee last year in region play.

“If you look at it, it’s still a real competitive region. We’re looking at the same type of teams. Statesboro is one of the best teams in the state. Ware County and Brunswick are very good. Glynn Academy has a new coach and offensive coordinator. Those guys are good, too. So it’s still a tough region. I think it’s a good thing to be in 5A but it’s not really a relief,” says Coach Pruitt.

Still, you’ve got to like Coffee’s chances better in 5A than in 6A. Gone are the games against Colquitt, Lowndes (who the Trojans haven’t beaten since 2001), rival Tift, and Valdosta. Instead, the Trojans will play Ware County, Statesboro, Effingham, South Effingham, Richmond Hill, and other schools in the coastal area. Playing in the new region makes the Trojans an immediate contender for a region championship, something Coach Pruitt hopes to bring to Douglas for the first time in many, many years. “That’s what we want to do – win region and make a run through the playoffs. But we’ve got a lot of work to do,” he says.

Offensively, the Trojans should be in very good shape. They have a lot of players returning, including last year’s All-Region quarterback in 6A, the 6’, 165-pound Tyree Paulk. In 2013, Paulk threw 24 touchdown passes, setting Coffee’s school record. The Trojans also have a pair of Florida State commits on the line in Cole Minchew (6’5”, 340) and tight end Jalen Wilkerson (6’4”, 235). Running back Lecarvius Sears was hurt much of last year but came on strong at the end of the season and had a big game in Coffee’s win over Valdosta to close the season. He will be back, along with Anthony Fussell, a wide receiver/running back who can do a lot of things really well. K.J. Jones is another talented lineman and sophomore Jeremiah Ashley is a wide receiver/quarterback who will likely succeed Paulk under center after this year. Junior Cam Davis, one of the Trojans’ top receivers last year, is also returning.

Defensively, the Trojans have a lot of holes to fill. Safety Brant Garrett is aback, as are linebackers Jay Lott and James Burke. On the line will be a lot freshmen and sophomores. “We’ve got a lot back on offense, not much on defense. We’re going to have a lot of new bodies on the defensive side of the ball,” says Coach Pruitt.

So what does all this mean for Coffee? A lot of Trojan fans are getting ready to make reservations in Atlanta for Coffee’s first appearance in the Georgia Dome. However, Coach Pruitt is much more reserved than that. “It’s going to be better for us in this region but it’s not going to be easy at all. This region is still one of the toughest in the state and there aren’t going to be any off nights here, either,” he says. Coach Pruitt is indeed correct. But in 2014, look for the Trojans to make the playoffs for the first time under Coach Pruitt.