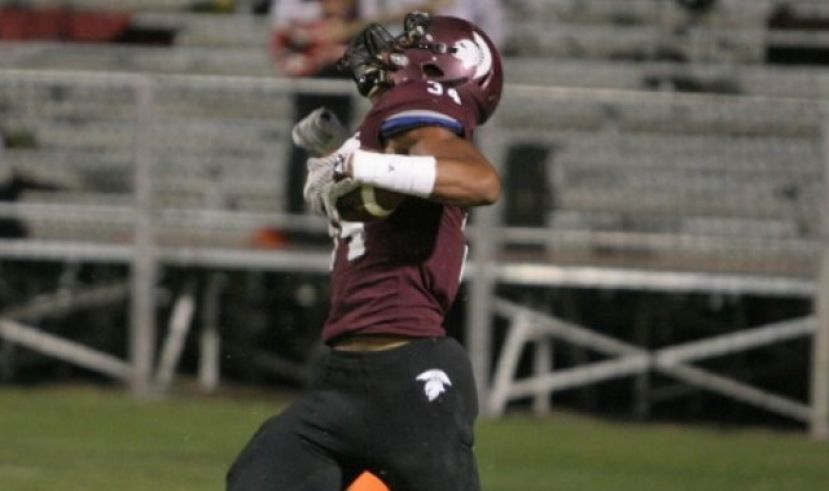 Robert Preston, Jr./DouglasNow.com Junior Trey Mizell celebrates after catching a long pass from quarterback Max Hughes. The Hughes-Mizell connection got the ball to the Warner Robins five-yard line. Tywone Brewton punched it in from there to give the Trojans a 35-8 lead late in the first half.

Warner Robins may be the center of aviation in Georgia but last night, it was Coffee quarterback Max Hughes who ruled the air. Hughes threw three touchdown passes, ran for another touchdown, and used long throws to set up two more scores in the Trojans’ 56-22 victory over the Demons on Homecoming. The Jefferson twins accounted for four interceptions (three by Jarquavious, one by Marquavious) and Demetrius Davis and Tywone Brewton each had a pair of rushing touchdowns as well.

Last week against Tift County, the Trojans played one of their worst games of the year. Friday, it almost looked as though they were picking up where they left off a week ago. Coffee’s first drive stalled inside the red zone and head coach Robby Pruitt opted for a field goal. The 32-yard attempt missed and Warner Robins took over on their own 20. Jarquavious Jefferson intercepted his first of three Demon passes on the night and Coffee got the ball back with a chance for redemption. The Trojans couldn’t muster a drive and had to punt. Warner Robins promptly went 81 yards and put up the first points of the night. The Demons gambled and went for two. They converted and took an 8-0 lead late in the first quarter.

That seemed to wake up the Coffee offense; the Trojans took charge of the game on their next drive and never looked back. Hughes led his troops on a 76-yard drive that ended with a 23-yard touchdown pass on fourth and six to Raekwon Burch. Jose Rodriguez, whose foot was true on extra points all night, helped the narrow the Demons’ advantage to one.

After forcing a Warner Robins punt, Demetrius Davis found the end zone for the first time with a nine-yard scamper to put Coffee ahead 14-8 with 10:14 remaining in the first half. Warner Robins punted again and this time, Hughes took to the air. He connected with Dalrone Donaldson on a 49-yard throw to go up 21-8 with 7:33 left in the second quarter. Coach Pruitt called for an onside kick, which Milton Jackson recovered at the Demons’ 41-yard line. Twenty seconds later, Davis fought his way into the end zone from four yards out to help the Trojans take a 28-8 lead.

The Trojans scored two more first half touchdowns, one on a five-yard run by Brewton and another on a 19-yard scamper by Hughes, to take a 42-8 lead into halftime.

In the second half, both teams scored twice. The Demons got on the board again on their first possession and again with just under six minutes left in the game. The Trojans scored on a three-yard Brewton run and a nine-yard pass from Hughes to Wade Sumner.

The win puts Coffee at 4-2 on the season. “We still have some things to work on but all in all, this was probably the most complete game we’ve played all year,” said Coach Pruitt after the game.

The Trojans are off next week before region play begins when the Houston County Bears, led by quarterback Jake Fromm, come to Jardine Stadium. The Bears are a perfect 6-0 this year and have outscored their opponents 274-151. “Fromm may be perhaps the best quarterback to ever play in the state of Georgia,” stated Pruitt.