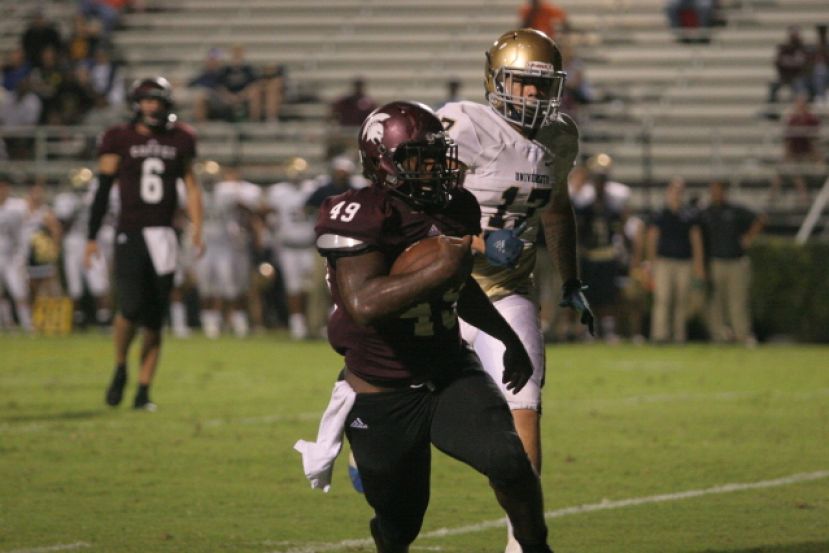 Robert Preston, Jr./DouglasNow.com Tywone Brewton's 12-yard score in the the third quarter gave Coffee a 35-21 lead over the University Christian Fighting Christians. On UC's next possession, Jarquavious Jefferson intercepted his second pass of the night and returned it nearly 50 yards for a touchdown.

Junior defensive back/receiver Jarquavious Jefferson had one of the best back-to-back series of any Coffee Trojan player this season Friday night. Late in the second quarter, with the Trojans leading the University Christian Fighting Christians (Jacksonville, Fla., the school Coffee head coach Robby Pruitt’s formerly coached) 21-14, Jefferson took a UC punt into the end zone for a touchdown to give Coffee a 28-14 advantage with 1:58 left in the second quarter. After the kick, Jefferson intercepted a Donell Stubbs pass to give the ball back to the Trojans. Coffee then ran out the clock and took a 28-14 lead into halftime. The Trojans would eventually defeat the Fighting Christians 49-21 to improve to 3-1 on the 2016 season.

The aforementioned series was but one of a series of highlights Jarquavious Jefferson had on Friday. He also intercepted another pass in the third quarter that he returned for a touchdown and he caught a 43-yard touchdown pass from Max Hughes in the first quarter to help give the Trojans an early 8-0 lead. Jefferson finished the night with two interceptions and three touchdowns. Not far behind him was running back Demetrius Davis, who scored twice – once from 17 yards and again from 39 yards. Tywone Brewton (12 yards) and Dalrone Donaldson (17 yard reception) rounded out the scoring for Coffee. Hughes also had a great game, throwing for two touchdowns and surpassing the 1,000 yard passing mark for the season in the process.

The game got off to a rather inauspicious start for University Christian. The team left its pants in Jacksonville and had to borrow Coffee’s white pants for the game. From there, it just went downhill. The Fighting Christians never had a lead, though they did tie the game at 14 midway through the second quarter.

For the most part, the Trojans controlled the game and dictated both the pace and outcome. Coffee won the turnover battle; the Trojans picked off UC three times (twice by Jefferson, once by Kedrion Flagg) and recovered two UC fumbles. The Trojans fumbled once, which the Fighting Christians recovered.

Next week, the Trojans face the Tift County Blue Devils in another non-region game at Jardine Stadium. The Blue Devils, who play in Region 1-7A, are 3-2 on the season. They lost to Parkview 34-15 in Tifton Friday night.

Coach Pruitt’s post-game interview can be seen below.

More in this category: « Tyreek Hill's journey is just beginning but he's off to a brilliant start (with video) Look at this 105-yard run by Tyreek Hill; if he's not the fastest man in the NFL I don't know who is »
Login to post comments