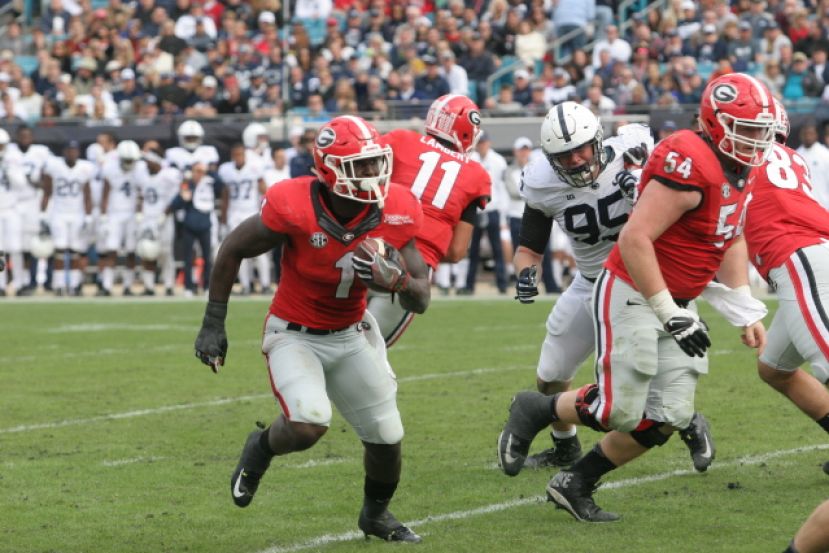 Robert Preston, Jr./DouglasNow.com Georgia running back Sony Michel runs for a touchdown in the Bulldogs' 24-17 win at the TaxSlayer Bowl Saturday.

It was almost as though the Georgia Bulldogs tried to lose the TaxSlayer Bowl Saturday in Jacksonville. After leading 24-7 at the start of the fourth quarter, the ‘Dawgs seemingly took the last 15 minutes off and let the Penn State Nittany Lions get back in the game. In fact, Georgia didn’t seal the victory until a Penn State Hail Mary fell to the EverBank Field turf as time expired. Georgia won the game 24-17 as newly hired head coach Kirby Smart watched from the relative quiet of a friend’s box at the stadium.

Sony Michel, Terry Godwin, and Malcolm Mitchell scored touchdowns for what ended up being an anemic Georgia offense. The defense had trouble stopping Penn State, especially in the second half, and gave up several big fourth down conversions to the Nittany Lions. When it counted, though, the Bulldogs kept the surging Penn State offense at bay.

“I knew our guys would go out and play their hardest today. In every game, you go through some good things and you go through some bad things. When Penn State was coming back, we just had to ﬁnd a way to ﬁnish them out. It was very important to us to ﬁnish strong. A lot of people might have doubted us with all we’ve been through, but we stayed together and played our game,” said Michel following the game.

Coach Smart was no doubt pleased to see his future team win under adverse conditions – no quarterback, no kicking game, and no coach. At the same time, the lack of offensive production, particularly from the quarterback position, has to be a cause for concern. The best pass play of the day came not from quarterbacks Grayson Lambert or Brice Ramsey but from Godwin, a running back, when he hit Mitchell for a touchdown on a halfback pass.

The win gives Georgia a rather surprising – and unlikely – 10-win season.

More in this category: « Coffee sophomore named to All-State team SGSC rolls to win over Handle It Prep Academy »
Login to post comments