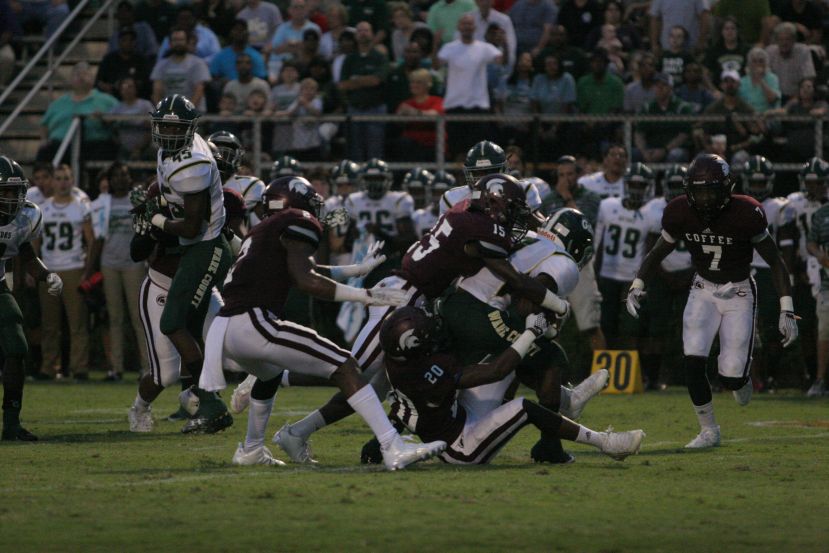 Robert Preston, Jr./DouglasNow.com Coffee's Jarquavius Jefferson (15) makes a tackle in a game earlier this season. Jefferson, a sophomore defensive back, was named All-State Honorable Mention by the Atlanta Journal-Constitution.

“We’ve got a sophomore defensive back, Jarquavius Jefferson, who is a tremendous athlete. He hasn’t played a lot of football so he doesn’t know a whole about the game. He’s primarily a basketball player and he’s been getting by mainly on his athletic ability. When he learns how to play football, he’s going to be a great player,” said Coffee Trojans’ head football coach Robby Pruitt way back in August.

It looks like Jefferson picked up on the game pretty quickly.

The Atlanta Journal-Constitution has released its All-State teams for the 2015 football season, and Jarquavius Jefferson is Coffee’s lone representative on the team. The AJC named him Honorable Mention as a defensive back. Jarquavius shared the secondary with his twin brother, Marquavius, and together the brothers made a formidable duo for opposing offenses. Jarquavius was a hard-hitting ball hawk who had a penchant for finding – and punishing – opposing running backs and wide receivers.

More in this category: « Hawks pull away in second half to defeat Fort Benning Bulldogs hold on to defeat Nittany Lions in TaxSlayer Bowl »
Login to post comments