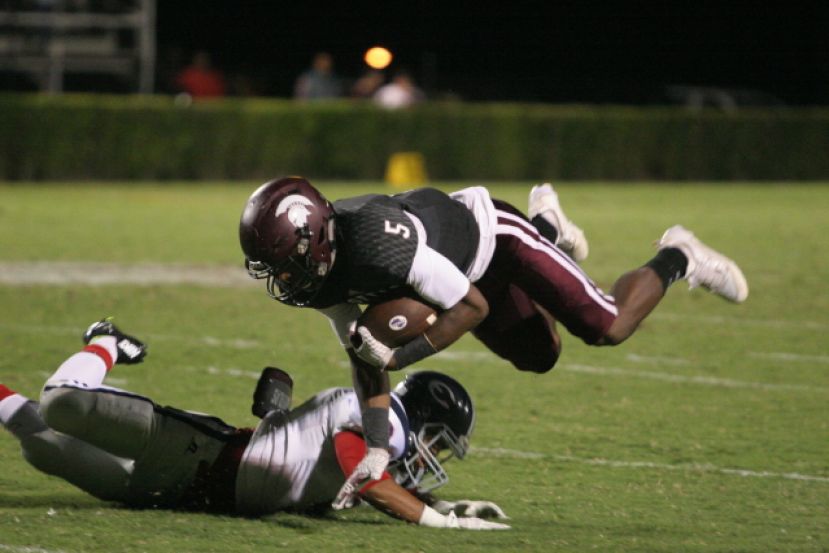 It’s not often that a team can lose the turnover battle yet still win a game. Yet that’s exactly what happened Friday night in Statesboro as the Coffee Trojans defeated the Statesboro High Blue Devils 39-20 in what started out as a very close contest.

Once again, special teams plagued the Trojans. Coffee missed three extra points, was on the wrong end of a blocked punt that led to a Statesboro touchdown, dropped two punts, and made a mental mistake on blocked field goal that nearly led to another Blue Devil score.

Almost amazingly, however, Coffee managed to pull it out and improve to 5-1 overall and 3-1 in region play. “Again, special teams was awful,” said head coach Robby Pruitt following the game. “We’ve worked, worked, and worked on it all year long. We just have to keep working even more and try to get better. Our offense played well tonight but our defense didn’t. We’ve got to put together a complete game at some point this year.”

Demetrius Davis scored three touchdowns for the Trojans (all rushing), Thomas Spencer scored twice (one rushing, one receiving), and Jarvis Williams added another Coffee score on a pass from quarterback Max Hughes.

Maybe the play of the game came on the last play of the third quarter when, with the Trojans leading 26-14, Coach Pruitt called a fake punt on fourth and long. Cam Davis took the snap and broke a long run on a surprised Statesboro special teams unit. Davis made it to the three yard line before he was brought down. On the next play, which opened the fourth quarter, Demetrius Davis found the end zone for his second score of the night. The touchdown gave Coffee a comfortable 32-14 lead with nearly a quarter left to play. Both teams would score again and the Trojans would hold on for a 39-20 win over an embattled Blue Devils program. Statesboro senior running back Mahlon Williams scored all three of the Blue Devils’ touchdowns.

Next Friday, Coffee faces South Effingham at Jardine Stadium. Kick-off is scheduled for 7:30.