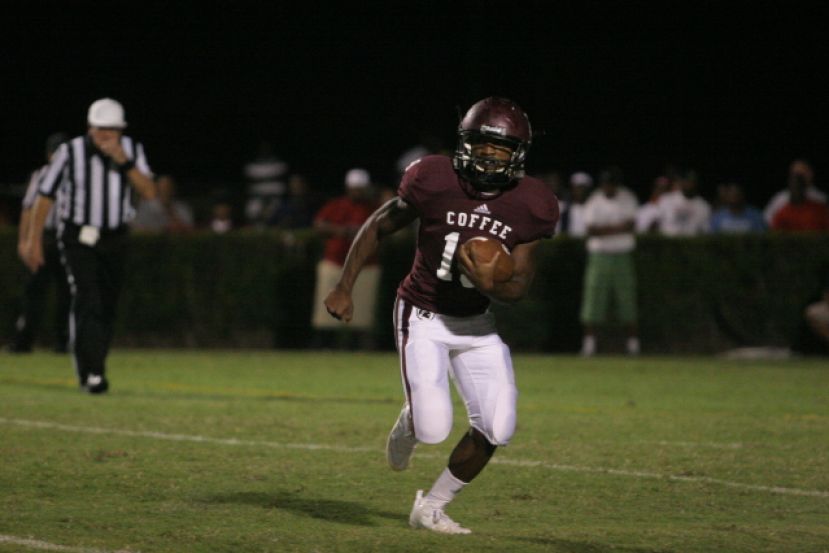 Focused. Determined. Stifling. Relentless. Those are but a few words you could use to describe the Coffee Trojans’ defense Friday night. The defensive unit pounded the Glynn Academy Red Terrors into submission as the Trojans picked up a much needed region win in Brunswick, defeating the Terrors 22-0.

The offense was adequate, special teams improved. But it was the defense that kept the Trojans in the game all night long. Glynn Academy is one of the region’s sleeper teams, seldom mentioned in the region championship discussion but one of the more dangerous teams on the schedule. Last year, the Red Terrors went farther in the playoffs than any other team in the region, advancing to the quarterfinals before losing to eventual state champion Northside-Warner Robins.

Friday night, however, Glynn Academy looked like anything but a playoff team. And the Trojan defense is the reason why. On the Terrors’ first two possessions, defensive back Jaquavious Jefferson intercepted a Glynn Academy pass and then recovered a fumble. Despite the strong defensive play, Coffee couldn’t get any points out of the two turnovers. Finally, on the Trojans’ third possession, senior kicker Jonathan Ortiz nailed a 36-yard field goal to give Coffee a 3-0 lead.

The Trojans scored again with 26 seconds left in the first half when Tywone Brewton, a sophomore running back, finished a short drive with a touchdown to give Coffee a 9-0 lead. The extra point was off its mark and the Trojans went into halftime with a nine-point advantage.

Coffee’s lead held until the end of the third quarter, when Demetrius Davis broke a 63-yard touchdown run to put Coffee up 16-0. The point after was again no good but the Trojans’ lead was looking more comfortable with each passing second. The defense continued to keep Glynn Academy’s high powered spread offense off balance while the offense picked away little by little. With 8:00 left in the game, the Trojans ran a fake punt on fourth down. Quarterback Max Hughes, was handling the punting duties Friday night, threw a pass to Cam Davis for a first down on the fake. Coffee took advantage of the trick play; running back Greg Williams finished the drive with a short touchdown run to put Coffee ahead 22-0 with 6:10 left. The extra point was again no good but the Trojans were firmly in control.

Neither team would score over the final six minutes and Coffee got out of Brunswick with its third shutout of the year and its first region win. The Trojans are now 3-1 on the season and 1-1 in region play. “This was a huge win for us. Our defense and our defensive staff did a great job all week long. This was a great offensive team to pitch a shutout against,” said head coach Robby Pruitt following the game. “I’m very proud of our team. The offense was ugly but we squeaked out a few plays tonight. We were more focused and we kept our composure tonight.”

The Trojans are back at Jardine Stadium next week for a region contest against Effingham County. Kick-off is set for 7:30 p.m.

More in this category: « Ware hands Coffee its first loss of the season Trojans escape with 20-14 Homecoming win over Effingham County Rebels »
Login to post comments