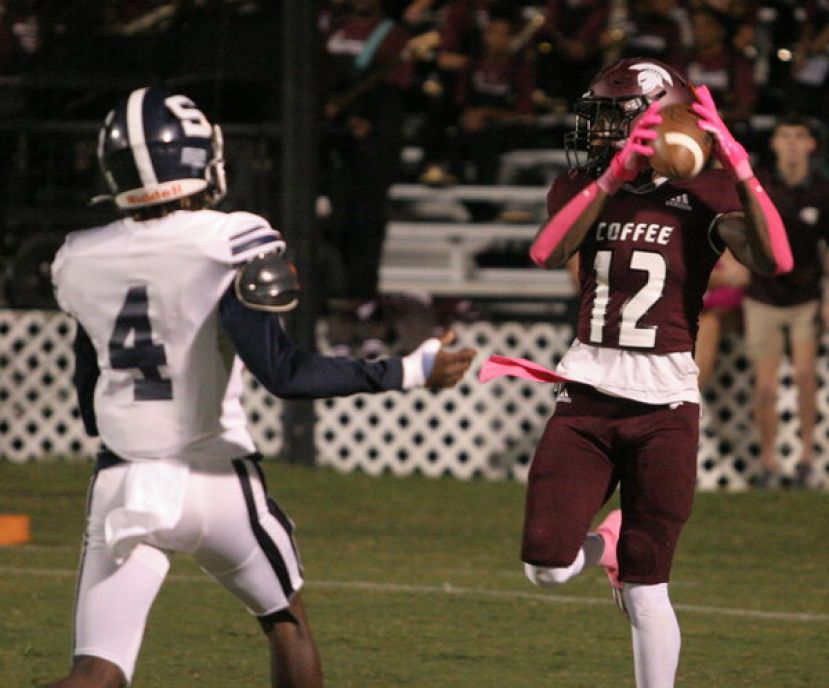 The Coffee Trojans showed why they are the state’s #1 5A offense on Friday night. Coffee defeated the visiting Statesboro Blue Devils 35-3 in another dominating region performance. The Trojans are 2-0 in region play and outscored their opponents 77-16 over the last two games.

Coffee jumped out to an early lead on a slow, methodical march downfield after holding the Blue Devils on their first drive. The drive ended on a 32-yard touchdown pass from quarterback Maurice Hansley to receiver Billy Simpson. James Jarrard, who has been handling most of the kicking duties in the absence of the injured Jonah Saylor, made his sixth straight extra point to give Coffee a 7-0 lead.

About four minutes later, Hansley found Simpson for another touchdown, this time for 42 yards. With 2:10 left in the first quarter, the Trojans were up 14-0. Statesboro added its only points of the game on a 31-yard field goal early in the second quarter to cut Coffee’s lead to 11.

And that’s all the Blue Devils would get.

The Trojans, meanwhile, added another score in the first half on a 10-yard run by running back Tyrese Woodgett to put Coffee up 21-3 with 43 seconds in the second quarter.

In the second half, the Trojans scored two more times — on an 18-yard run by Fred Brown and a four-yard run by Antwain McDuffie.

Coffee came away with a convincing 35-3 win. The Trojans are now 6-1 overall and undefeated in the region. Coffee has a short week this week — the Trojans return to action Thursday night on the road against Jenkins (Savannah). “We’re not going to have 24 hours to enjoy this one,” said head coach Mike Coe after the game. “Our coaches will get to work tomorrow. We’ll get the kids in for their big lift and film on Sunday. We’ll try to make this week as normal as possible but it’s going to be a different week no matter how we do it.” Kick-off is set for 7:30.