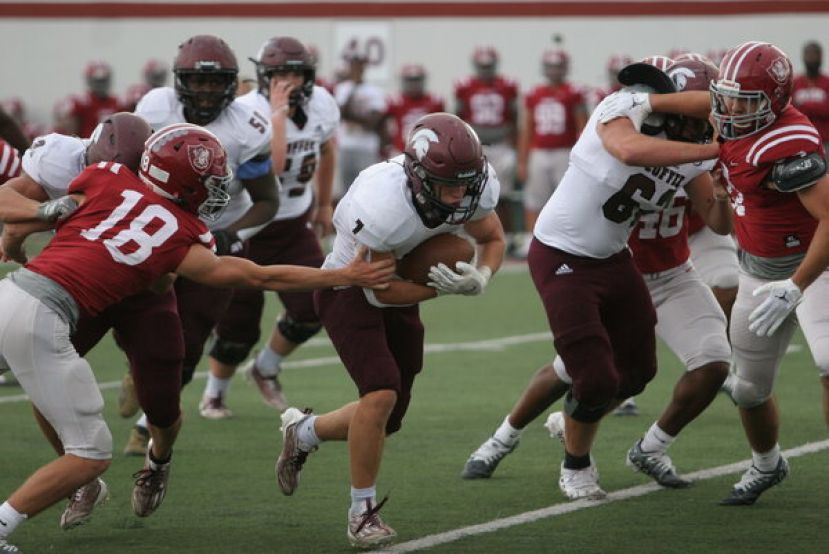 The Coffee Trojans and Lowndes Vikings junior varsity squads fought to a draw for 38 minutes Wednesday afternoon at Martin Stadium in Valdosta. Then, in the last two minutes, the teams started swinging — and both landed haymakers. It was the Trojans, however, who came away with a 7-6 win.

In a game originally scheduled for Thursday but moved to Wednesday due to Hurricane Ian, Coffee and Lowndes battered and bruised each other without scoring until the final two minutes. It was a hard game to watch — physical, violent, punishing. Both defensive units had their ways with their opponents, to the point that people inside the stadium were asking if junior varsity games go to overtime or not.

Lowndes ended the overtime talk first. Following a tremendous punt by Lowndes, the Vikings picked off a Trojan pass deep in Coffee territory. A couple of plays later, the Vikings found the end zone. Lowndes went for two and did not make it. With 2:04 remaining in the game, the Vikings led 6-0.

The Trojans didn’t have long to launch a drive. But launch a drive they did. Jaquavious Simpkins returned the ensuing kick to the Lowndes 38. Coffee ran a few plays then quarterback Bray Coe connected with Range Robinson, who made it to the Vikings’ six yard line. A slew of Vikings tried to bring Robinson down but he stayed on his feet, carrying four defenders a long way before he finally fell to the ground.

With first and goal from the six, Coffee bogged down. They couldn’t gain any ground on Lowndes’s defense. On fourth down, Coe lobbed a corner pass into the end zone to James Jarrard that fell incomplete. The officials called pass interference on the Vikings, giving Coffee new life.

The penalty moved the ball to the two yard line. With 38 seconds left, Coe gave the ball to running back Zean Preston who rumbled in for the score behind a wall of an offensive line (and with a little help from Coe pushing him forward). The touchdown tied the score at six apiece. Kicker Jonah Saylor made the point-after easily and Coffee had a very shaky 7-6 lead.

Lowndes came out focused and determined, and the Vikings flexed a little muscle. They moved the ball across midfield and gave themselves a chance to score. The Coffee defense, however, proved too stingy and stopped Lowndes just across the 50 yard line.

The JV has three more games remaining. Next, the JV Trojans play Ware County at Jardine Stadium on Oct. 6 at 5 p.m.

More in this category: « Erin Robinson throws two no hitters as Lady Trojans go 2-1 for the week Lady Trojans win four out of five last week »
Login to post comments