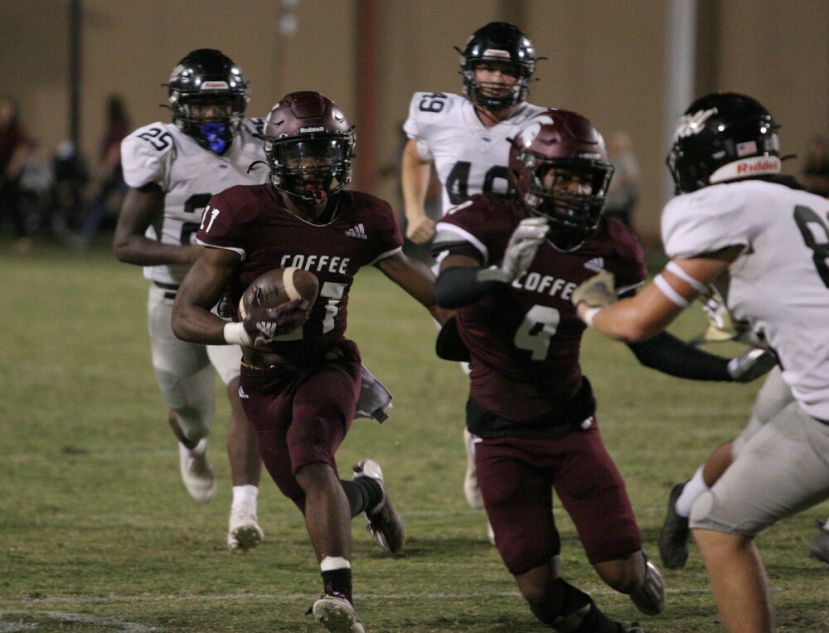 “In spite of some penalties, I thought we played pretty well tonight. I’m proud of our kids. They’re really starting to understand what it takes to get better and they’re getting better every week. That’s what it’s going to take — the team that gets better and better as the season goes on — that’s who's going to win it in the end,” said head coach Mike Coe after the game.

The two teams battled early on with neither squad doing much through the first quarter. Finally, with 25 seconds left, the Wildcats made a mistake and the Trojans capitalized. Deep in their own territory, Richmond Hill had to punt. The snap sailed over the punter’s head and rolled into the end zone. Tyriq Edwards fell on the loose ball for a touchdown. Saylor’s point-after gave Coffee a 7-0 lead.

Richmond Hill put its first points on the board with 6:12 remaining in the second quarter with a 33-yard field goal to narrow Coffee’s lead to four. A few minutes later, Fred Brown found the end zone from two yards out to put Coffee ahead 14-3.

The Trojans grabbed even more momentum as the second quarter wound down. Sophomore workhorse Tyrese Woodgett returned a punt for a touchdown with 1:28 left in the half. Twelve seconds later, Jayden Hancock jumped a receiver’s route and intercepted a Wildcats’ pass, easily running into the end zone for a touchdown. The back-to-back scores put Coffee ahead 27-3 going into halftime (Richmond Hill blocked the extra point after Woodgett’s score).

The Wildcats opened the second half with the ball but couldn’t do anything. They punted to the Trojans and Coffee answered by marching down the field for another touchdown, this time by Antwain McDuffie. Early in the third quarter, the Trojans had a very comfortable 34-3 advantage.

Richmond Hill, however, wasn’t done. Running back Zion Gilliard scored the next two touchdowns, cutting Coffee’s lead to 34-17. The Trojans’ offense refused to concede anything to the Wildcats and shut down their comeback attempt. Brown scored his second touchdown of the night then Isaiah Johnson notched another pick-six for Coffee. With 6:57 left in the game, the Trojans had things under control with a commanding 48-17 lead.

As the clock ticked down to 1:32, Coffee had an opportunity to do something it hadn’t even attempted to do all season long — kick a field goal. Saylor trotted on the field facing a 33-yard kick and drove the ball through the uprights easily, bringing Coffee’s total for the night to 51 points.

The Trojans are 4-1 on the season and have now finished the non-region schedule. They’re off next weekend then return to action on Oct. 7 on the road against Bradwell Institute. “We’re going to enjoy this one. We’ll give the kids Sunday and Monday off then get back to work on Tuesday,” said Coach Coe.

More in this category: « Coffee JV shuts out Tift JV 15-0 at Jardine Stadium Erin Robinson throws two no hitters as Lady Trojans go 2-1 for the week »
Login to post comments