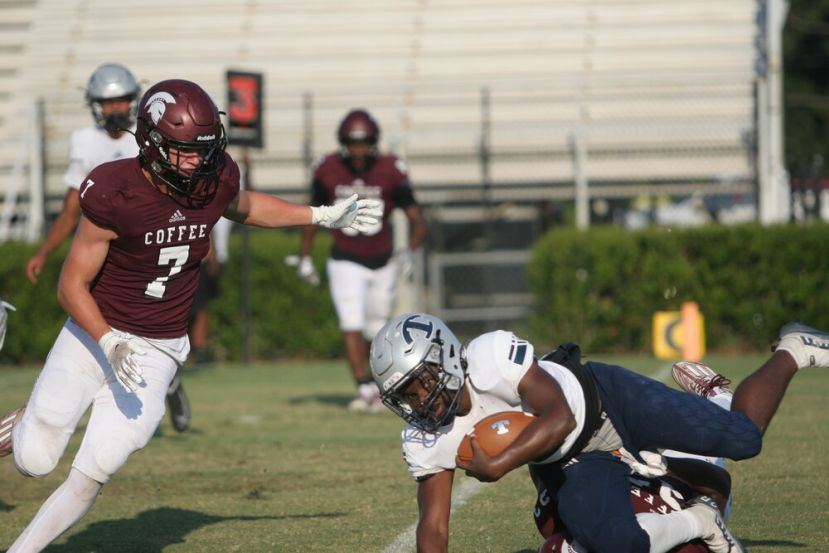 Robert Preston Jr./DouglasNow.com Jyarius Carter brings down the Tift quarterback in the end zone for a safety. Zean Preston (7) was there to help if the quarterback escaped Carter's grasp.

The Tift County Blue Devils (JV) came to Jardine Stadium looking for a little revenge against the Coffee Trojans (JV).

They didn’t get it.

The Trojans won 15-0 in what was a low-scoring, hard-hitting contest that was very different from the two teams’ varsity match up from earlier in the year. Coffee won that game 55-7.

Coffee wanted to keep that high scoring trend against the Blue Devils alive. Tift, however, wanted to stop the Trojans’ offense and go back home with a win. Early on, it didn’t look like either team was interested in scoring. No one reached the end zone until over halfway through the second quarter when Coffee quarterback Bray Coe found one his favorite targets, James Jarrard, for a 30-yard touchdown. A successful point-after put the Trojans up 7-0.

Coffee was driving near the end of the half when a lost fumble inside the red zone gave the Blue Devils the ball. The Trojans’ defense stepped up and pushed Tift back, eventually grabbing a safety when linebacker Jyarius Carter tackled the Tift quarterback in his own end zone for two points.

The half ended with Coffee up 9-0.

Neither the Blue Devils nor the Trojans did much in the second half. Coffee finally scored on the last play of the game; time expired as running back Tyrese Hansley bulldozed his way over three different Blue Devils on his 17-yard run into the end zone. There was no extra point attempt and Coffee slipped away with a 15-0 win.

The JV Trojans are back in action next week on the road against Lowndes. That is the last away game of the season for the JV.