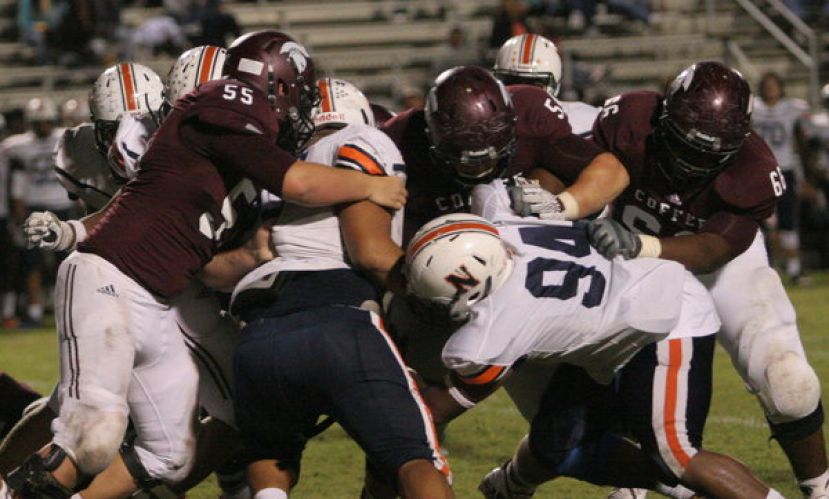 Robert Preston Jr./DouglasNow.com The Coffee Trojans, seen here against Northside-Warner Robins earlier this year, have had a wrench thrown in their state title run. Their objective, however, remains the same despite the complications.

Now that the Georgia High School Association has postponed the state championship football game between the Coffee Trojans and the Lee County Trojans (along with several other games), what comes next? At the moment, the game is scheduled for next Friday at 8 p.m. in Lee County – a venue at which we have already played. There are reports with varying degrees of credibility stating that our school officials are appealing the decision in order to get the game played at another location.

Whether this happens or not remains to be seen. My sneaking suspicion is that the GHSA won’t change their decision regarding where the game will be played. The GHSA, like many government and quasi-government agencies, tends to be quite stubborn. Once it makes decisions, those decisions often stand, regardless of how much sense it makes to change them.

There are several concerns when it comes to playing the game in Lee County. I have never been to Lee’s stadium. I have, however, heard those who have been say that its facilities are not particularly accommodating – there are few stands, no locker room for the visiting team, and, given what happened after the Nov. 3 game, a hostile fanbase.

Let me say here that I have never liked the idea of playing the state championship games at the Georgia Dome, Mercedes Benz Stadium, or any other neutral site venue in the Atlanta area. The kids and fans enjoy the hype around playing in such a stadium but I have always thought that playing in the Dome or Mercedes Benz removes a vital element that every championship game needs.

Take Mercedes Benz Stadium, for example. The stadium seats 71,000 for football. Even if 12,000 people show up for a game, that still leaves 59,000 seats empty. Championship games should be sold out. The stands should be packed. At Georgia’s state final games, that’s not the case. Not by a long shot. And I feel as though that takes away from the overall experience.

I don’t know about the GHSA’s finances but I do know that where football games are broadcast, money abounds. The GHSA has what amounts to a monopoly on broadcasting Georgia high school football games and it protects that monopoly with the ferocity of a momma bear protecting her cubs. Playing the championship games one at a time at central location gives the GHSA the opportunity to broadcast each one – and reap the financial windfall from doing so. I believe playing the games at Mercedes Benz Stadium is less about the experience and more about the money.

Certainly the GHSA would have considered that as officials made their decisions Friday and Saturday – which says to me that they firmly believe it was the right thing to do. After the so-called Snow Jam of 2014, any mention of snow sends the metro area into panic. The GHSA made its decision knowing it would be controversial, damaging, and could taint what has been an otherwise amazing championship run for all teams involved this football season.

While postponing the game caused a social media uproar the likes of which I have never seen, all in all, it probably was the safest thing to do. Now that it’s been made, what’s next?

First of all, I would like to see the game played here, at Jardine Stadium. There is a precedent for what I’m suggesting. Typically, higher seeded teams host post-season games. Lee is a #1 seed, we are a #2 seed. But the GHSA’s Constitution says that in all postseason games except the championship games, the higher seed hosts. In this championship game, Coffee was declared the home team via a coin flip prior to the games. The home team should host and this time, that’s us.

We have a larger stadium, better facilities, and plenty of parking to handle the number of fans who will be there. In particular, whether we play in Douglas or Leesburg, we will have more fans there than Lee. We need the greater seating capacity that Jardine Stadium allows.

However, that probably won’t happen. We will likely travel to Leesburg for the game, which will cause problems for players and fans alike. But there is a lesson here, one that all of us should be acutely aware of. Life is full of obstacles. This team has already overcome tremendous adversity to get to where they are today. They’ve lost teammates. They’ve lost coaches. They’ve had plenty of people working against them to subvert the program. Yet through it all, here they are, playing for the highest honor a high school football team can achieve.

Given their history, what is one more obstacle to conquer? Despite all the controversy of the last 24 hours, there’s still a state championship to win. The task has not changed. The circumstances may have but the objective remains the same. One thing the kids don’t need to hear is the negative comments, about how they’ve been short-changed, about how some folks from north Georgia have stolen their opportunity. That kind of thinking causes a victim mentality, which can lead to an excuse to lose.

Our Trojans aren’t victims. They have been called a team of destiny and that hasn’t changed. When faced with an obstacle, you overcome and win despite the odds. The date and location may have changed but the goal hasn’t. Stay focused, Coffee Trojans, and finish the task set before you.

More in this category: « Concrete Wave Magazine picks up city's banishment of skaters from Christmas parade You're in good hands at Coffee Regional »
Login to post comments