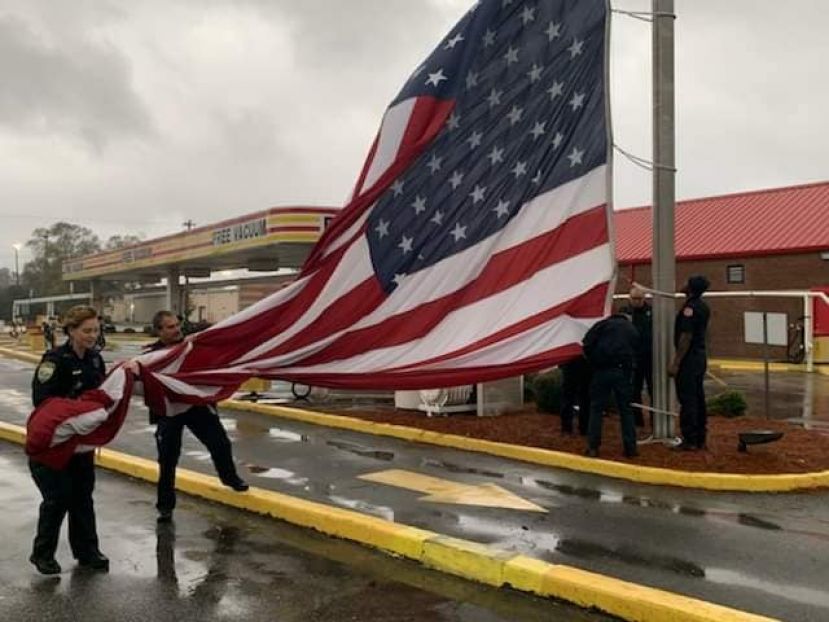 Photo courtesy of Facebook Officers and firefighters protect an American flag that was getting battered on the ground this weekend during bad weather.

Douglas police officers Margarito Perez and Rebecca Mallery Lira rode by Goo Goo Car Wash this weekend and noticed that the large American flag had been lowered down the pole and was sitting on the ground. Despite the rain and wind, they stopped and held the flag off the ground. They had called for assistance and stood with the flag until officers Justin Wade and Ashley Purvis, as well firefighters from the Douglas Fire Department, arrived. They attached the flag to the pole and waited on representatives from Goo Goo to arrive and properly remove the flag until the storm had passed.

Gestures like this seldom get recognized yet officers perform these kinds of tasks on a daily basis. It’s the little things like this that show love and respect for country and community, and these patriotic men and women deserve a resounding thank you for their expression of respect and dignity to the United States and the Douglas-Coffee County community.

More in this category: « Douglas man arrested after allegedly stabbing girlfriend during argument It's official: Publix is coming to Douglas »
Login to post comments